Video game Easter eggs used to be fairly rare. A hidden room here, a secret level there, and maybe a designer’s name or picture tucked away for you to possibly find. Nowadays, games are littered with them, whether they’re subtle pop culture references, or entire levels that pay homage to something outside the game. These are eight of our favorite Easter eggs in recent memory.

You’re sure to have a favorite, or to have found an obscure one I haven’t seen. Tell us what it is in the comments! 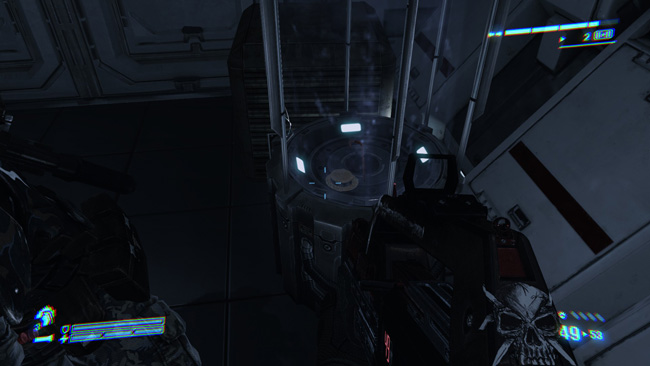 Aliens: Colonial Marines might have been a stinker of a game, but they got at least one thing right: a cool Easter Egg. In the mission “One Bullet,” enter the laboratory. There you can find a containment capsule that holds a small straw hat and a cane. Later in the level, you’ll find two chestburster specimens who are actually wearing that getup. If you’re a Mel Brooks fan, you should remember the scene from Spaceballs where the chestburster explodes from John Hurt’s chest and makes a classy exit. It’s based on the classic cartoon “One Froggy Evening” by Chuck Jones. 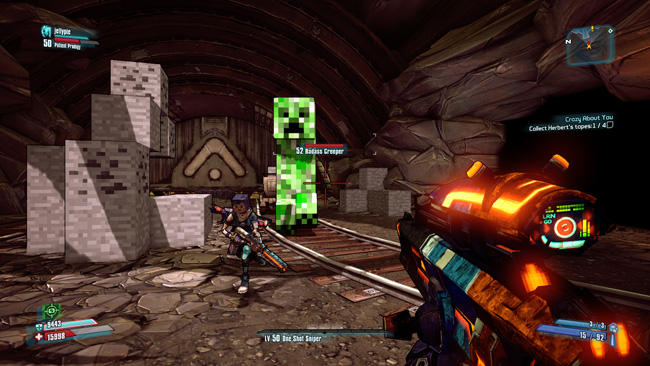 Image Source: I Wanna Be a Geek

The Borderlands series is riddled with easter eggs and pop culture references, but one that really stood out to me was the Minecraft one. Tucked away in a corner of the Caustic Caverns you’;ll find some familiar-looking dirt blocks. Punch your way through, and you’ll find yourself in a Minecraft-inspired cavern complete with creepers to kill. There’s also some loot here that’s unique to this cave, including a pixelated [em]Minecraft helmet. 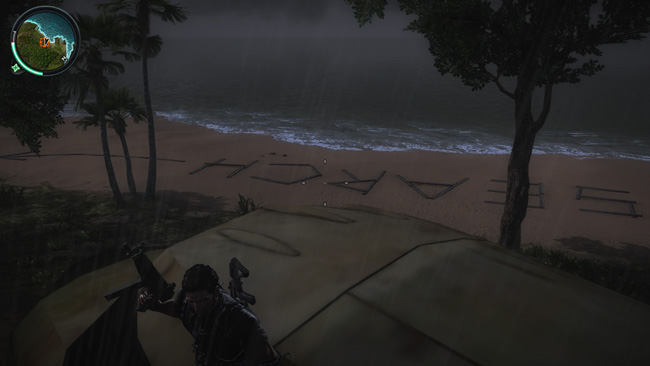 In the upper left hand corner of Just Cause 2’s map, you’ll find Hantu Island. It has many peculiarities, not the least of which is that any plane of helicopter that flies over it below 1.5 km will be destroyed. Land on the island, and you’ll find a plethora of references to the TV show “Lost,” including the hatch, the smoke monster, and the word “Search” written on the sand. There are no discoverable locations on the island, so sacrificing a vehicle is the only way to get there. 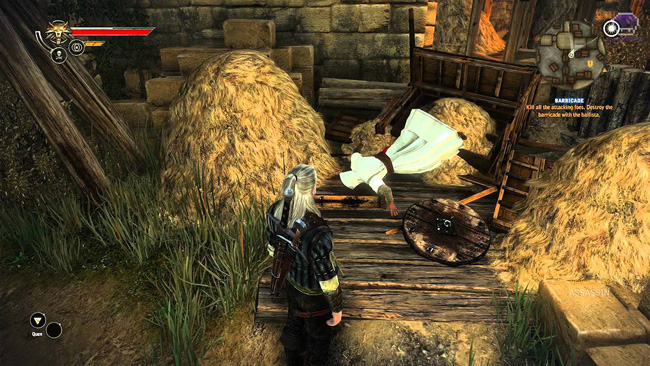 The Witcher 2: Assassins of Kings
Easter Egg: Altair dead in a bale of hay

In the prologue to The Witcher 2, Geralt wanders by a body on the ground that appears to have fallen into a cart of hay and been killed. The body is dressed in what appears to be a white Assassin’s outfit. When he sees the corpse, Geralt mutters “Guess they’ll never learn,” and receives a +1 to his Assassination attribute. I always wondered how that whole “Leap of Faith” thing wasn’t instantly fatal. 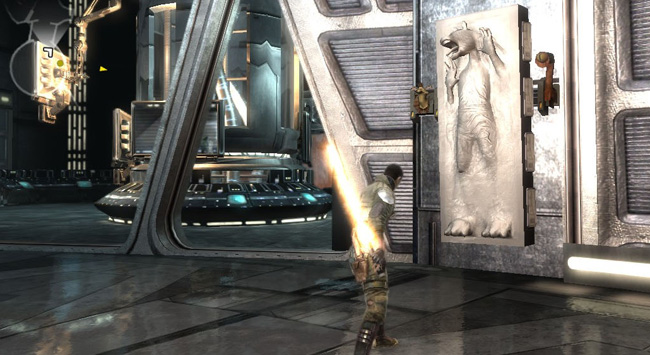 There may never be a Star Wars character as universally reviled as Jar Jar Binks. If you’re not a fan, then you should head to the trophy room in the Imperial Kashykk level of Star Wars: The Force Unleashed. Once you’re in there, you’ll see that the trophies are a wide variety of creatures from the Star Wars universe. Best of all, you’ll see that someone not only managed to capture Jar Jar, they froze him in carbonite. Seems like a solid plan. 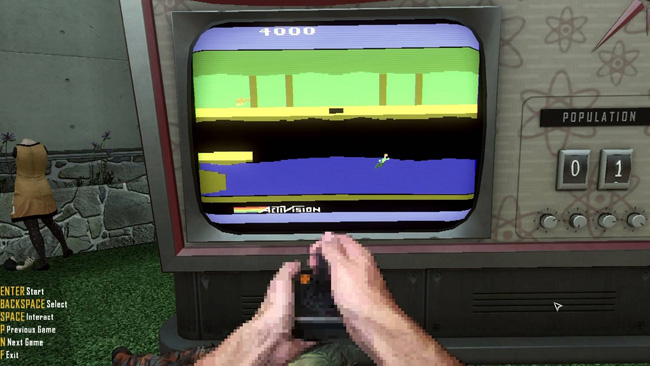 Hiding games inside the game happened in both Call of Duty: Black Ops titles, with the first game sporting Zork and Dead Ops Arcade. Black Ops II gets the nod here, because its offerings include 4 classic Atari titles. To find them, start a private match on Nuketown 2025. As soon as the match starts, find all the mannequins in level and shoot their heads off. If you can accomplish that in 90 seconds or less, you’ll be able to play H.E.R.O., Kaboom!, Pitfall, and River Raid on a TV screen near the population sign. As an added bonus, you’re invincible while playing. 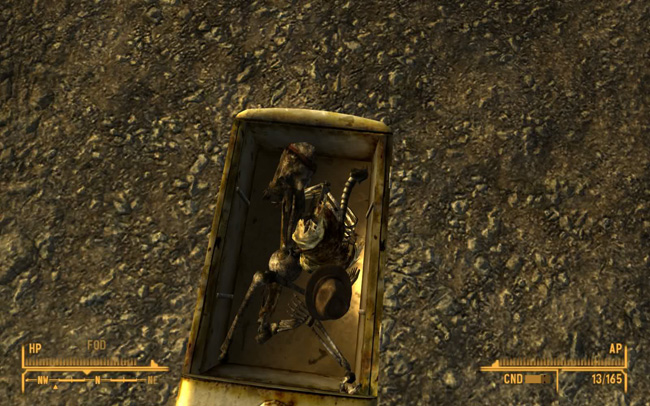 We all remember that scene in Indiana Jones and the Kingdom of the Crystal Skull, right? The one where Indy ludicrously escapes a nuclear blast in a refrigerator? Well, apparently someone at Obsidian thought it was a bit crazy as well. If you have the Wild Wasteland perk (the perk that lets you see all sorts of crazy stuff), you can find an old refrigerator near Goodsprings. Inside is a skeleton wearing what looks to be Indy’s iconic hat. Pick it up, and it becomes a Suave Gambler hat for male characters and a hat with a feather in it for female characters. 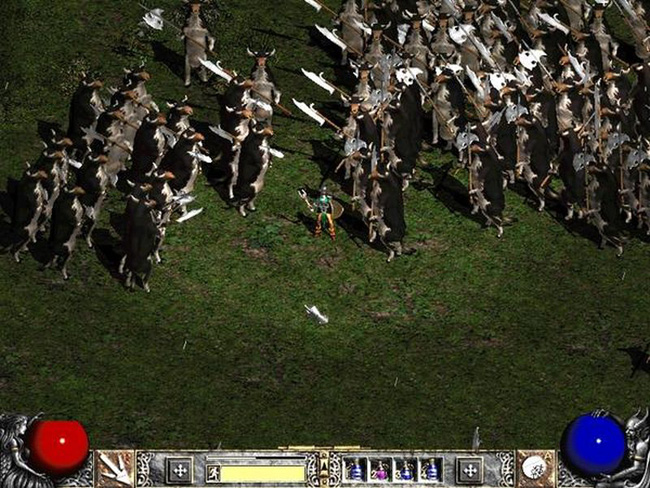 It’s possible that no Easter Egg has been discussed as much as Diablo II’s cow level. It’s almost required to try it out when you play. If you’ve beaten the final boss (if you have the expansion installed, you have to defeat both Diablo and Baal), all you need to do to get there is go to the rogue encampment. Once you’re there, combine Wirts Leg and a Tome of Town Portal in the Horadric Cube. A red portal will appear. Step through, and you can get right to the bovine slaughter. It’s important to note that once you kill the Cow King, you won’t be able to re-enter the Cow Level on that difficulty.