Superheroes are corrupting our youth.

Take little Jesse here, who just yesterday was seen playing in nuclear waste, exclaiming merrily, “I’m gonna become a ninja turtle!” Or little Timmy, who casually strolled into the local hospital’s radiation wing and was found playing with an X-ray machine, asking, “Which button turns me into the Hulk?”

Okay, this isn’t a real problem. No one in our modern world actually believes that radiation will give you superpowers, but that wasn’t always the case. There was a time, before the dawn of the Internet, when radiation was still mysterious enough to us that our culture started to fill with tales of mutation and masked heroes given superhuman abilities thanks to some form of radiation exposure.

But what effect would radiation or a mutagen actually have on a living being? Is there any truth at all to this superhero mythos? Let’s analyze the facts behind the fiction – not because it is necessary to do so, not to criticize the work, and not even to prove how unrealistic the fiction is. We do this for one reason alone: for science!

Read on for nine things that could actually happen to heroes exposed to radiation or mutagens.

1. Gain the power of… Lactose tolerance!

Let’s consider the Ninja Turtles, who were exposed to a chemical mutagen. A mutagen is simply something that induces mutation, but what is mutation, exactly? If we were to go by comic books, we’d be left with the impression that it is the process of changing a living being in some substantial way.

That isn’t too far from the truth, though it is grossly exaggerated. A mutation is a change in a living being’s DNA sequence – the genetic code that determines our traits. Sometimes – rarely, but sometimes – that mutation is beneficial in some way. But it’s not going to let you shoot lasers from your eyes.

So what super powers can you get from mutation? The gnarly ability to have a metabolism that keeps you thinner and more energetic than most people! The tubular trait of having higher-than-average bone density! The radical power to process lactose as an adult, allowing you to stave off osteoporosis!

Each of the beneficial mutations we covered is caused by a small change in the DNA sequence. While you can argue that a larger change would create a larger beneficial mutation on the scale of a superpower, it just doesn’t work that way. Your DNA is like computer binary code; randomly change one of the 0s to a 1, and it’s possible that result will be an improvement to the code. But the more random changes you make, the more you’re likely to end up with a Blue Screen of Death.

A number of genetic diseases are attributed to mutations: sickle-cell amaemia, cystic fibrosis, and Huntington’s disease are just three examples of disorders that shorten a person’s life expectancy and quality of life. They are caused by “faulty code” in the DNA, 1s and 0s that are out of sequence, causing errors in the program. Our DNA evolved into a complex sequence suited to maximize our survivability; random changes are more likely to do harm than good.

3. Gain the power of… Nothing at all!

Sometimes, a mutation has neither a beneficial nor a detrimental effect. The DNA is altered, but there is no appreciable change in the organism. Given the alternatives, this is one of the best fates anyone exposed to a mutagen can hope for. Though I guess lactose tolerance is pretty nice, too.

The only way the Ninja Turtles are going to grow in size due to exposure to a mutagen is if they develop a bunch of tumors. Cancer is a common result of mutation – common enough that it warrants special mention outside of the other genetic diseases.

You see, a mutagen isn’t some sentient being with a design in mind. It’s just an agent that causes errors in DNA. Our DNA suffers damage every day, but we have in-built mechanisms to repair this damage. But a mutation in the error-correcting mechanism may lead to DNA accumulating damage more rapidly than normal. Another mutation may cause cells to reproduce more rapidly and frequently. Another may cause a loss of the gene that suppresses tumors. And yet another may cause error signals to be passed on and on and on. The result is the perfect storm for cancerous tumors to spread throughout an organism’s body.

5. Gain the power of… Leukemia!

Okay, yes, we’re talking about cancer again. Leukemia is a cancer of the blood and bone marrow, and we’re singling it out because exposure to radiation is known to cause cancer – especially leukemia.

Radiation acts as a mutagen, because it damages DNA. The more you’re exposed to radiation, the greater the chances you’ll get cancer – but the degree of exposure doesn’t determine how severe the cancer will be.

When organic tissue is bombarded with enough radiation energy, molecular bonds break. This chemical damage may eventually impact DNA, and as previously mentioned, our body is only able to repair so much damage. Light damage will leave cells alive but only partly functional, and if the right kind of damage is done, these damaged cells will spread uncontrollably, as previously described.

6. Gain the power of… Radiation poisoning!

What happens if the damage is severe enough to outright kill the cell, rather than just leave it damaged? Terrible, terrible things.

Radiation-induced cancer is a slow killer, but exposure to high amounts of radiation can lead to immediate, striking symptoms which can present themselves within an hour or two after exposure and last for months. If the dose of radiation is small enough, the best you can hope for is nausea, vomiting, bleeding, and increased risk of infection. But larger doses can damage your brain and even lead to a swift death. And no, you will not be able to reconstruct yourself as some form of blue-skinned demigod.

7. Gain the power of… Cognitive decline!

Not only will radiation not give you awesome mind powers, it can actually impair your mind’s ability to do what it normally does. Some cancer patients who have undergone radiation therapy to shrink tumors have experienced deficits in their memory, ability to learn, and spatial processing.

Radiation won’t turn you into a super-genius – in fact, it will decrease your IQ. These effects were most dramatically seen in children who underwent radiation therapy, with IQ dropping by several points not just after treatment, but year after year after treatment stopped as well.

8. Gain the power of… Hypothyroidism!

The thyroid gland is important to regulating our metabolism, among other things. When it isn’t working properly, it can grow into a goiter that bulges from the neck or larynx. Radiation therapy to the neck has been known to mess with the thyroid, making it underactive – a condition known as hypothyroidism.

Some signs and symptoms of hypothyroidism include fatigue, poor memory and concentration, hair loss, weight gain, swelling, poor hearing, shortness of breath, and even carpal tunnel syndrome. These aren’t exactly the calling cards of superheroes. How will Gambit throw cards with wrist cramps?

9. Gain the power of… Radiation burns!

Whether the visible effect is immediate or occurs months after exposure, radiation can leave burn marks on the skin. A sunburn is caused by the sun’s ultraviolet radiation, and other radiation sources can produce similar – and deadlier – results. Red patches, blistering, skin peeling, hair loss, lesions… It’s not pretty.

If radioactive smoke is inhaled, your lungs and gastrointestinal tract can be burned as well. And whether they are internal or external, fourth degree radiation burns can lead to death. 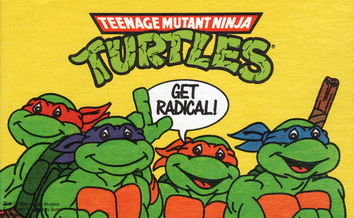 Starting to see a pattern? Radiation and mutagens are bad news. The only thing radical about the matter are the free radicals generated by radiation exposure.

That’s right – as coincidental as it is, the scientific term “radical” refers to either atoms or molecules that have been broken free from their bonds, which can happen through exposure to radiation, as we discussed earlier. The radicals can then react chemically with the surrounding material.