A dice game for sleepy students 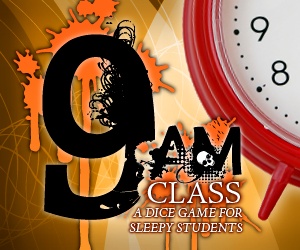 No college student likes signing up for a 9:00 a.m. lecture on Monday mornings, but sometimes you just need the credits. It’s a simple enough class, and your only real challenge is remaining conscious the entire two hours. The prof just loves calling on students for answers, but you’ll be fine as long as you’re not passed out when he shouts your name.

All players take their seats by placing their die on the corresponding numbered “desks.” Once seated, all players roll their dice to determine whether they’re awake or asleep at the start of class. At 9:00 a.m. (the start of class), all students start with 20 points, or a perfect grade.

Are you awake or asleep? A handy primer.

The object of the game is to have the highest grade by the end of class.

Each turn represents 10 minutes of class time. The game begins at 9:10. At the beginning of each turn, all players ¬- except the player called on last turn – re-roll their dice to determine their status for that turn. Someone then rolls the professor die to determine whom the professor calls on to answer a question. The number rolled by the professor corresponds to the students’ desks.

If the student called on is asleep, he re-rolls to determine the number of points he loses.

If the student called on is awake, he is given a choice to either make himself look good, or make the rest of the class look bad:

The scores are recalculated for the number of points lost or gained by each player, and the new scores are recorded in the appropriate 10-minute time slot. The game then moves on to the next turn.

After the final turn of the game is played (11:00 a.m.), the scores are calculated, and the student with the highest grade wins.

Six players not a good number for you? No worries! 9am Class can be played with four, eight, 10, 12 or 20 students! Each student will still need his own six-sided die, and replace the professor’s six-sided die with one that accounts for the corresponding number of students. The rest of the game remains the same!

Next Page: Designing 9am Class

Concept:
Inspired by early-morning courses during my undergraduate years, I originally conceived 9am Class as being a game about staying awake. Starting with the fiction, I wanted players to be students in a classroom, struggling to stay awake for fear of getting kicked out of class by the professor. Students could sleep as long as the professor didn’t notice, but if a student were called on, that student would get the boot. I imagined 9am Class would make a great little dice game, where players could roll to determine their status.

Design:
The first element I designed was the sleep system. Looking at the six faces of a die, I took 1, 2 and 3 to represent a sleeping student, as their faces were either a small dot or a line (similar to a closed eye). 4, 5 and 6 represented an awake student, due to the circular formation of the dots on those faces (similar to an open eye).

Earlier, I had players rolling at the beginning of the game to determine their status, and having their die slowly count down to 1 (symbolizing players slowly falling asleep), and then resetting back to 6 (as though a player suddenly jolted awake). The problem here was determining when the professor called on a student. An easy solution was having a separate die be the professor, who would roll to call on students.

I decided to keep the concept of the professor die and assign numbered “seats” to each of the six players. The seat a player was in determined that player’s assigned number. When the professor rolled that number, it meant he called on that player. This also gave the game the visual look of a classroom. The six “desks” were positioned in a horizontal line in front of the professor, with each player’s die played on his/her desk.

From this visual look, I determined that the game should be played in rounds. If a player were called on while asleep, instead of being ejected from the class, his “grade” would go down. The goal of the game then became to have the highest grade by the end of class.

Result:
9am Class went through a lot of iterations, and I believe this worked to its advantage. The final game is polished, if a bit simplistic, in its execution. The fiction – though cute and effective – places too many distinct roles on the dice. The game has also never been heavily strategic, largely based on a simple “luck of the roll.” I added several decision-making elements to introduce more strategy (like making other students look bad and taking bathroom breaks), but on the whole the game appears at face value to rely on little more than luck. I was able to solve this problem, however, with the next dice game I designed, which became Magic Numbers.