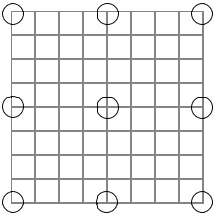 Only behind a mask can we dance with anyone, free from identity and consequences of the everyday. The masked ball only comes once a year, and for many brings with it dreams of a night bereft of such worldly burdens.

There are but two perils to avoid on a faceless night. The first is time, for when the grand clock strikes midnight all masks must be removed, and society will once again look unkindly upon unlawful pairings.

The second peril is Death, himself masked and very much present at the event. Death’s embrace brings an unwanted cold to the warmest of bodies. Avoid him, and any who’ve taken his arm throughout the night.

Each player must select a character, the identity of which is a secret. Write down the name and gender of each character on a card, taking care to create as many cards as people, and making sure there is a Death card. Shuffle that many cards and have each player pick one.

Keeping their identity a secret, each player places their pawn on the board in one of the circled positions as pictured. The center position should only be used if there are nine players.

With the exception of Death, characters arrive to the ball in pairs:

The object of the game is to end the party alongside your character’s partner, while avoiding contact with Death or those he’s encountered.

For Death, the object of the game is to embrace all characters, whether directly or indirectly.

Each turn, all players take their turns simultaneously, moving their characters up, down, left, right, or diagonally along the lines of the board.

Anytime your character is adjacent to another character, the two characters embrace. At this time, you may both lean in and whisper to each other your identities. (Make sure you’re close enough, and quiet enough, so that your opponents don’t overhear!).

Should Death whisper in your ear, you’ll spend the rest of the game as his minion, carrying and spreading Death among the party-goers. In addition to your identity, you should whisper Death’s name to anyone you embrace.

After the 18th turn, all characters should “unmask,” revealing their identities and whether or not they embraced Death. If any characters are still alive, the character closest to his/her counterpart wins.

Inspired perhaps most directly by Edgar Allen Poe’s short story “The Mask of the Red Death,” Masquerade! was intended as an analogue for sexual expression, with the unavoidable white elephant of contagion as an adversarial mechanic. A lofty concept, to be sure.

Early designs featured no disease mechanic at all, and were based solely on the notion of avoiding one’s role in society. While masked, character were rule-less, but revealing one’s identity imposed upon them a series of in-game rules that dictated movement.

Disease is much better mapped out on a large scale, so having infection as a mechanic in a relatively small game proved troublesome. Infection is almost entirely unavoidable, with no strategy based around the avoidance of it.

Ideally, the design would allow for sexual tension, coupled with the fear of the unknown.

A flawed design desperately in need of revision. How can we save the disease mechanic while still maintaining the masquerade atmosphere? Post thoughts and musings in the comments. Think of it like a dance…