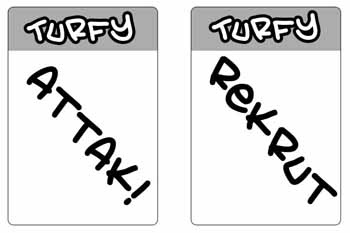 On the elementary school playground, it’s kill or be killed. Do or die. Win, or go back inside. On the blacktop during recess, rival cliques compete for control of the jungle gym. So align yourselves, and prepare for the battle of your 9-year-old lives.

Each player should have both an “Attack” and a “Recruit” card in their hands. At the start of the game, each player has one die, placed in front of him and outside of the currently unoccupied jungle gym.

The object of the game is to have control of the jungle gym when recess ends, which occurs at the conclusion of the tenth round of play. Players vie for control of the territory by rolling their dice. In order to bolster their armies, players can refrain from attacking during any round to recruit their fellow classmates into the good fight.

Each player makes the decision by placing the appropriate card from their hand face down on the table. Once all players have done so, the cards are revealed. All actions are said to take place simultaneously.

In order to seize the jungle gym, players must attack the grade-schooler currently in control of the territory. If no player currently controls the jungle gym – as is the case with the first round – then all attacking players battle each other for control.

In order to attack, a player rolls all dice in his possession (representing his gang of adolescent soldiers). The player’s attack power is the sum of all his rolled dice. In the case of the first round, the player with the highest attack power takes control of the jungle gym. In the event of a tie for highest attack power, tying players must re-roll.

When attacking the jungle gym, each player’s attack power is compared to that of the player in control of the territory. Here, ties between attacking and defending players count as losses for attacking players. Any losing player must discard one of his die (unless he only has one die left). Players tying for highest attack power must re-roll to determine a victor.

By playing the recruit card, a player chooses to hang back from the battle, and instead coerce his peers into joining the crew. Any time a player recruits, he adds one die to his army that round, with a maximum of three dice allowed. 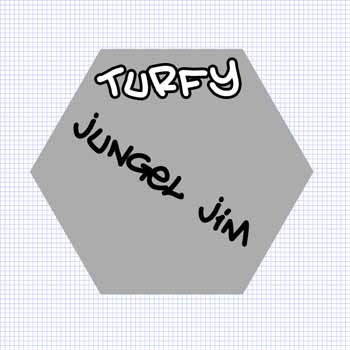 In an effort to fake out their opponents, players with three dice can still play the recruit card rather than attacking, but no other kids will join their intimidatingly large gangs.

The player in control of the jungle gym does not attack or recruit. Instead, he defends the jungle gym from attackers. Whenever one or more players attack, the defending player rolls his dice to determine defense power.

If no-one attacks the defending player during a round, he automatically recruits a die just because he’s that awesome.

At the end of ten rounds, the player left in control of the jungle gym is declared the winner, and his gang declared the toughest in all of fourth grade.

Concept
Turfy is an attempt at making an adorably simple game about gang warfare. I wanted to take a theme robust and ultimately weighed down by its own controversy, and distill it to a single element. In Turfy, that became the notion of territories, or one territory in particular. In order to distance the game from the standard tropes of gang fiction, I set it in elementary school: a brutal and vicious environment in its own right.

Design
For fear of incurring the wrath of a certain large non-digital publisher, I will not say that my game is in any way ripping off a particularly well-known war-based strategy title. I will say, however, that the concept of territorial battle was one I hoped to emulate and pay homage to.

Rather than having players fight over multiple territories over the course of the game, I preferred to have them battle over the same spot again and again and again, in typical “king of the hill” style. Inspiration also comes from the flash game Dicewars, which also uses dice to represent army units as they move across the playing field. As with most of my low-impact games, the design process was quick-moving and fluid, relying heavily on the fiction to determine the direction of the rules.

Result
It’s not a deep game. But as always, I hope it’s a fun one for players.