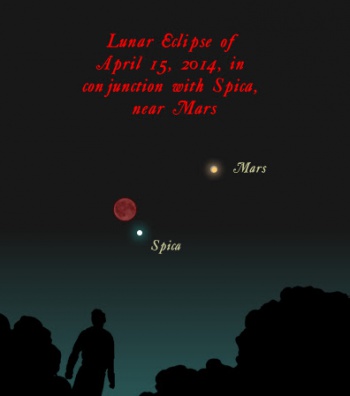 One might have hoped that doomsday theories would settle down when 2012 passed without incident, but apparently some armchair prophets won’t take “No” for an answer. At least they’re settling on a impressive display that inspires apocalyptic thinking this time: A blood red lunar eclipse due early next week. The eclipse is the first of a tetrad – four total lunar eclipses that occur within a series – the last of which ended in 1968. During the eclipse our moon will appear to be bathed in a crimson light just as the planet Mars comes into view directly beside it. The visual should be very exciting for scientists and astronomers, but it also heralds the opening of the Blood Moon Prophecy, which predicts major events in Israel that culminate in the Second Coming.

The prophecy, popularized by pastors John Hagee and Mark Blitz, states that the tetrad coincides with two significant Jewish holidays: Passover and the Feast of Tabernacles. Hagee, author of Four Blood Moons, cites Joel 2:31 from the Hebrew Bible to make his point: “The sun will be turned into darkness, and the moon into blood, before the great and terrible day of the Lord come.” That said, coincidence really seems to be all this is based on. As noted by EarthSky.org’s Bruce McClure and Deborah Byrd, the Jewish calender is lunar-based, so of course eclipses will coincide with key holidays.

“The Jewish calendar is a lunar calendar,” McClure and Byrd write. “In any year, it’s inevitable that a full moon should fall on or near the feasts of Passover (15 Nissan) and Tabernacles (15 Tishri) … It is somewhat ironic that three of these four lunar eclipses are not visible – even in part – from Israel. The only eclipse that can be seen at all from Israel is the tail end of the September 28, 2015 eclipse, which may be observable for a short while before sunrise.”

As for the blood red appearance of the moon, that happens during most lunar eclipses anyway, appearing differently “only in years where volcanic activity is pronounced”. Tetrads also aren’t that uncommon to begin with; with a total of eight scheduled for the 21st Century alone. Pending new information, we can probably put this theory inbetween the 2012 and February’s Ragnarok prophecies in terms of likelihood.

Still, a blood red moon and the red planet located directly beside each other in the sky? That should look pretty sweet. The eclipse starts on April 14th at 21:20 GMT.