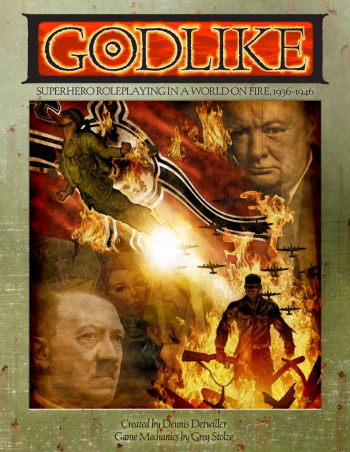 Pick up GODLIKE and other superhero settings just in time for Comic-Con!

The latest Bundle of Holding brings superheroes of all sorts to the table. The superheroes in GODLIKE don’t wear spandex and capes. In a grim alternate history, these superhumans are fighting on both sides of World War II. Powerful but expendable, these heroes are known as Talents, and their superhuman powers put them on the front lines. Using the One-Roll Engine developed by Greg Stolze, GODLIKE and the other roleplaying games in this bundle are fast to play and quick to start, with a deep and flexible ruleset. You can take control of supervillians in Better Angels, or build your own superpowered world with the Wild Talents rule book.

Paying the $11.95 minimum gets you the revised edition of GODLIKE, which includes everything you need to play, and two other books. First is Wild Talents, the One-Roll Engine rule book that also includes an expanded history for GODLIKE. Second is Better Angels, a standalone setting where all players are supervillains who have been possessed by demons. Each player plays both their own supervillain and a demon tempting another player. Also included in the core bundle is the ORE Freebies set, a curated list of free One-Roll Engine games, including Greg Stolze’s Lovecraftian horror game Nemesis. Beat the threshold price of $22.70 to add three more titles. The first bonus book is Allan Goodall’s GODLIKE campaign Black Devil’s Brigade, which is set during the Allied invasion of Italy. Stolze’s eCollapse setting puts players in a future where cheap superpowers for rent are built by the lowest bidder. Finally, Kenneth Hite and Stolze team up to bring some fantasy to your superpowers in Grim War, adding spirit-summoning magic with a terrible price.

All of the games in this bundle are built to use the One-Roll Engine rule system. One-Roll Engine is a generic RPG system developed by Stolze and based on dice pools of ten-sided dice. All aspects of an action are determined with a single throw of the dice. For example, when characters fight, their combat initiative, hit locations, and damage are all determined in a single roll of the character’s dice pool.

All of the books in the bundle are DRM-free, as always. The One-Roll Engine Bundle from Bundle of Holding ends July 31 at 11 am Eastern. Are you ready to take up a cape and mask?

Avengers-Themed Nail Art is a Manicure Not Found in Stores