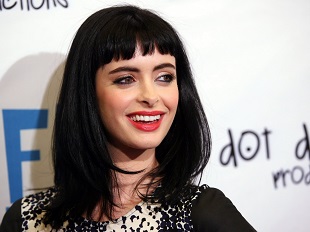 Jane from Breaking Bad is Marvel’s next heroine.

Marvel is pushing full-steam ahead with its Netflix series plans, and the latest step in that strategy is casting Krysten Ritter as the lead in Jessica Jones.

Deadline got the scoop, and also says that Teresa Palmer (Warm Bodies) was in the mix until the very end. What seemingly sealed the deal for Ritter was her chemistry reading with Mike Colter (Halo: Nightfall, The Good Wife), who is reportedly Marvel’s choice for Luke Cage.

The Jessica Jones series is one of three Marvel properties heading to Netflix, as it will be preceded by Daredevil, and followed by The Luke Cage Power Hour (my title, not theirs). Iron Fist is also getting a show (although details are scarce for now), with all four heroes eventually landing in some sort of Defenders miniseries.

Ritter has been active in Hollywood since her debut in 2001, with her biggest credits including Breaking Bad, Don’t Trust the B—- in Apartment 23, Gilmore Girls, and Veronica Mars. Her blend of comedy and drama should be a good fit for the Marvel universe, as that kind of emotional range is a necessity for many of its characters (see: Chris Pratt in Guardians of the Galaxy.)

Melissa Rosenberg, who’s lent her pen to Dexter, Party of Five, and Twilight, is acting as showrunner, while Drew Goddard (Alias, Buffy the Vampire Slayer, Lost) is helming the Daredevil series.