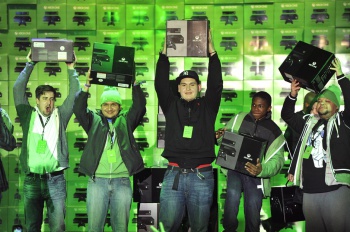 The Xbox One had just as a successful launch as the PlayStation 4.

When Microsoft announced that it would struggle to meet Xbox One demand, people all around the internet scoffed. Surely, with all the negative press the console has received, there wouldn’t be any supply issues? However, Microsoft has just announced that the Xbox One has sold over 1 million units in just 24 hours, selling out in most retail locations and matching the figure Sony announced for its own PlayStation 4 launch. It’s worth noting that the Xbox figure is for the 13 worldwide markets it launched in, while the PlayStation figure is specifically for North America.

The team confirmed the launch of Xbox One was the biggest launch in Xbox history, besting the Xbox 360 by a considerable margin. “We are working to replenish stock as fast as possible to meet the unprecedented demand from our customers,” said Microsoft in an official statement.

Microsoft has also used the “online” nature of the box to collect some interesting launch-day statistics. In the last 24 hours:

“We are humbled and grateful for the excitement of Xbox fans around the world,” said Yusuf Mehdi, Corporate Vice President of Marketing and Strategy, Xbox. “Seeing thousands of excited fans lined up to get their Xbox One and their love for gaming was truly a special moment for everyone on the Xbox team. We are working hard to create more Xbox One consoles and look forward to fulfilling holiday gift wishes this season.”