By the end of The Hobbit trilogy, few will defend Thorin’s seeming greed… but really he’s just a stickler for a well-written contract.

Editor’s Note: The following article is a bit different than our standard fare. With Thorin Oakenshield much maligned in The Hobbit trilogy – particularly The Battle of the Five Armies – Ma’idah Lashani felt the need to step in to defend Thorin’s acts with a legal argument on the contracts of Middle-earth.

“You have no right to enter that mountain,” Bard the Bowman says to Thorin, who replies simply and factually, “I have the only right.”

Much of The Hobbit‘s newest film adaptation revolves around conflicting ownership claims to the treasure of Erebor, lost under the Lonely Mountain to Smaug the Destroyer long ago. The elves seek to have their silver and white gems returned, the men of Laketown would see their home restored to its former glory, and even the Dark Lord, Sauron, wants the fortress itself due to its strategically strong location. The original owner however, of Erebor, the gold, and the Arkenstone, a treasure beyond price, was Thrain I, who established the Kingdom under the Mountain and unearthed its heart. Thus any rightful claim to such bounty would pass patrilineally to Thrain’s living heirs upon his death. And indeed, his descendant, Thorin I, later reinvigorated Erebor, founding the Second Kingdom and providing the town of Dale with the trade goods necessary to develop into a center of commerce.

Although Thorin I’s folk were eventually ousted from their stronghold by the dragon, the claims of thieves are rarely tolerated by civilized society, and thus Smaug is clearly not the rightful owner of Erebor’s treasure, despite retaining control. Even if the treasure were characterized as lost rather than stolen, in that case the finder may retain control over the object only so long as the true owner isn’t staking a competing claim. Alternatively, one might seek to argue that the line of Thrain abandoned their property, however it is well known that that they only stopped seeking to reclaim it after realizing the futility of fighting a dragon. As soon as Thorin II discovered a potential means of evicting the dragon, he pursued the opportunity, demonstrating that he never abandoned the effort to take back his inheritance. Therefore, as a descendant of Thrain I, Thorin II is the true owner of the treasure of Erebor, and any that seek to exclude him from completely controlling it do so without right. 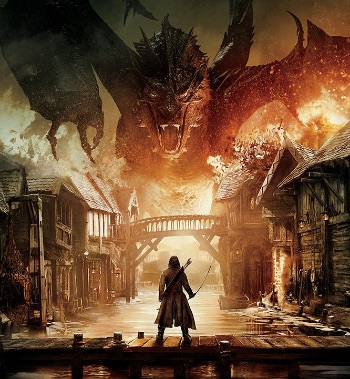 While Thorin is the true owner of Erebor and its treasure, including both the Arkenstone and the gold, that is not to say that he cannot otherwise be asked to part from it, through contract or to satisfy a debt. Here, there are at least two alleged claims against Thorin’s ownership of the treasure of Erebor: First, the people of Laketown’s claim that they are owed a portion of the gold to rebuild the damage Smaug did to their home, and second, Bilbo’s claim that pilfering the Arkenstone was an appropriate exercise of his percentage of the dwarven company’s profit.

The people of Laketown allege, after Thorin has reclaimed possession of his home, that he owes them a debt of cash to finance the reconstruction of Laketown II because he promised it in exchange for their help. However, it is unclear whether Thorin actually promised to do any such thing. When discussing his plan to retake his birthright with the townspeople, he reminded them that their city used to benefit substantially from its mere proximity to Erebor, becoming a mercantile force in the region solely due to its ability to facilitate the trade of dwarven goods.

“I promise you this,” Thorin says, “If we succeed all will share in the wealth of the mountain. You will have enough gold to rebuild Escaroth ten times over.” While the townspeople may have taken these words as an explicit offer of cash in exchange for freedom and assistance, Thorin did not specify a quantity, quality, time, or place, indicating that the statement was meant more abstractly than actually. One might be tempted to believe that this is simply the way in which Thorin contracts, however the depth and specificity of his existing agreement with Bilbo indicates otherwise.

Even if the contract were explicit and actually assented to by both parties, it would still be voidable because it was formed under duress. Duress occurs when assent is induced by improper threat that leaves the victim with no reasonable alternative but to agree to the terms of the offer. Such contracts do not express the actual will of the parties, and instead represent an illusion of consentuality – in other words, it is theft masquerading as trade.

Here, Thorin was a prisoner of the Master of Laketown, and having committed no other substantive crime, was clearly held on condition of his assent to pay. Thus, it may be fairly said that Thorin and his companions were being held ransom, and that their freedom was ultimately exchanged for the promise of future payment. Such promises are usually regarded as fraudulent, and it is against public policy to enforce them lest kidnapping be encouraged. 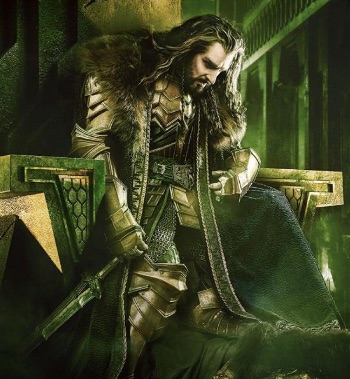 Absent a contract, the people of Laketown could also seek to claim that Thorin owes them restitution as a result of causing the damage to their town. Causation requires that but for the actions of the accused, the harm would not have occurred. Here, it is difficult to say that a scorched town of barely-holding-on-humans nestled literally in the shadow of “Dragon Mountain” wouldn’t otherwise have had high premiums on their fire insurance.

There has to be a certain degree of risk assumed when choosing to permanently establish your society in such a dangerous locale. Perhaps if the town had been located somewhere else, and the dwarves had intentionally or directly led the dragon to the town, then one could say that the dwarves caused the damage. However, here it seems that a dragon is more akin to an act of nature than a recklessly fired handgun, as it is both immensely powerful and quite difficult to control.

Moreover, it would be unfair for the people of Laketown to feel entitled to a dwarven subsidy after ages of failing to improve their own circumstances, despite clearly having all the necessary tools to do so, including a bow, arrow, and archer, all specialized for dragon killing.

Bilbo Baggins also asserts a contractual claim to the treasure, deriving from his employment agreement with the dwarves, notarized by Gandalf the Gray himself. Bilbo is hired as a burglar, and is informed in no uncertain terms that he has been hired in order to retrieve the Arkenstone. The terms of the contract are incredibly long and detailed, but nevertheless Bilbo is shown to have read it in full. It defines out-of-pocket expenses, time required, remuneration, and even funeral arrangements. Furthermore, it specifies that payment will be issued as “cash on delivery, up to but not exceeding one fourteenth total profit, if any.”

There are at least four issues with Bilbo’s claim to the Arkenstone deriving from that phrase alone. First, Bilbo is promised cash, not goods, and therefore Bilbo’s claim can only be valid with regard to the gold and not the gem. Next, Bilbo’s claim only becomes valid upon delivery, in this case of the Arkenstone, and thus it would be logically impossible for him to satisfy such a requirement without exchanging that which he sought to retain. Third, Bilbo’s claim may not exceed one fourteenth of the total profit. The Arkenstone is valuable beyond measure, and therefore is obviously worth substantially more than Bilbo’s fair share of the hoard. Finally, any profit Bilbo is promised has been qualified with “if any,” meaning he has not been guaranteed any profit at all, much less the very thing he was hired to attain for Thorin in the first place.

Humorously, the contract goes on to specify that “present Company shall not be liable for injuries inflicted by, or sustained as a consequence thereof, including, but not limited to evisceration,” suggesting that even if the people of Laketown had possessed their own written agreement with the dwarves, it would have been unlikely to cover fire damage.

Unfortunately, all of Thorin’s attempts to explain the basic principles of fair dealing to the rest of Middle-earth are unilaterally rebuked, and his words are wrongly interpreted not only as the breach of valid agreements, but also as evidence of his growing madness. And perhaps that was the dwarven King’s last gift to his people: Here, in the shadow of the Mountain, five armies were able to unite for a short while under a shared willingness to reject the legal framework underlying ordered civilization, rallied by their mutual lust for another man’s treasure.