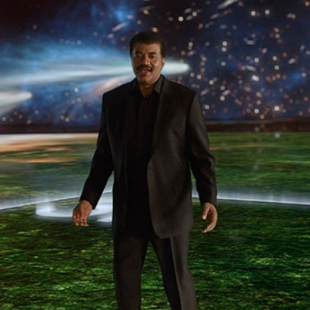 Few Hollywood players can claim the odd path to success of Seth MacFarlane. He is a comedian who first turned his animated student film about a moron and his talking dog first into a pilot for the then-fledgling Cartoon Network and then into Family Guy. Fox snapped up the crude sitcom-spoof as a potential Simpsons successor but canceled it just as it seemed to be getting a (shaky) footing. In a largely unprecedented move, Fox then un-canceled the series when DVD box-sets of the existing seasons turned into massive moneymakers buoyed by an unexpected groundswell of fandom among collegiate Millennials.

Since then, MacFarlane has been cock of the walk (giggity) – with not only Family Guy to his credit but also American Dad, the recently-concluded Cleveland Show, a best-selling album, the box office smash Ted and the upcoming A Million Ways To Die In The West. He has what the business calls “clout,” which means you get to throw your weight behind personal passion-projects that might otherwise not have the “juice” to get pushed through. A risky project becomes less risky when its undertaken to keep a moneymaking star-talent “on the reservation.” And when Fox came to MacFarlane looking to see where he’d like to spend his clout, (read: “Tell us what we need to take a bath on to keep Brian and Stewie on the network for another few seasons”) he had two things in mind.

The first seemed obvious to the point of self-parody: He wanted to helm a revival of Family Guy‘s (almost literal) prehistoric ancestor, The Flintstones. That project, though still officiallyon his plate, has been delayed. The second project, though, hit the worlds of both network television and academia for a loop: MacFarlane opted to throw his weight behind the long-gestating revival of Carl Sagan’s legendary science series Cosmos.

The creator of Family Guy had asked Fox – the television network behind not only his own scatological cartoons but other infamously low-rent ventures like Who Wants To Marry A Millionaire and MAD TV – to add an educational science documentary to its prime-time lineup.

The original Cosmos aired on PBS in 1980, and is remembered as one of the most widely-viewed and highly-praised attempts to infuse science education into the popular culture of all time. It certainly turned the genial Sagan into one of the rare pre-internet Nerd Superstars, a man whose name and distinctive voice (somewhere between Burgess Meredith and Mister Rogers) became synonymous with the dreams of the Space Age for a whole generation – a generation that can still get misty-eyed at the words “pale blue dot.”

By contrast, the new Cosmos (produced by MacFarlane and Sagan’s widow Ann Druyan) features as its human star Neil deGrasse Tyson, already one of the present day’s biggest Nerd Superstars well before this new series was a blip on anyone’s radar. A titan in his field (astrophysics, for the record) equally sought-after as a guest for venues like The Daily Show and serious academic conferences, Tyson’s notoriety straddles the line between pop-science and just plain pop. It’s likely that many who know him as a “badass” internet meme don’t necessarily know who the image actually derives from. And prior to Cosmos his most recent widespread cultural engagement was stirring up Twitter with detailed snark directed at the myriad scientific fallacies of Gravity (while still praising the film), and he gained earlier attention a few years back for sniping at Titanic for a temporally-inaccurate arrangement of stars in its nighttime scenes (director James Cameron made it a point to correct this in the film’s subsequent 3D re-release.) Supposedly, it was Tyson who first turned MacFarlane on to the idea that Druyan was looking for producers for a revival in the first place.

To be sure, some in the scientific community have balked at Tyson’s cavalier engagement with pop culture. After all, it’s not every Hayden Planetarium Director who’s willing to kick back to field questions at SXSW, but few would question his credentials.With his welcoming affect and penchant for glib “Are you being serious?” retorts, he belongs to the vaunted caste of “cool teachers.” That subclass of lecturer thought caricatured out of existence by the maudlin stepchildren of Dead Poets’ Society (culture)-warrior/educators with a natural skill for making often abstract concepts not only understandable but personally relatable. And yes, while there’s no need to dwell on it… you’re damn right it matters that the 21st Century face of “Smart = Cool” is a black man.

But if Tyson is The New Hotness, the rest of Cosmos (at least so far – as of this writing the series will have aired two of its eight installments) is decidedly old school. Those who dreaded the presence of edgy of humor or a dumbing-down of information because of the presence of MacFarlane as producer (or Fox as a network, since it can be easy to forget that it’s largely a separate-entity from the often not exactly science-friendly Fox News Channel) can rest easy knowing that the series is as earnest and knowledge-focused as ever. In fact, it’s almost tempting to classify its more ultra-sincere moments as close to corny, with Tyson’s famous storybook-narrator baritone gently insisting upon the wondrousness of life, the universe and everything.

As did Sagan before him, Tyson boards a “Spaceship of The Imagination” and flies through slick CGI renderings of planets and constellations, laying out in layered narratives the awesome majesty of cosmic goings-on, their effect/meaning to us on Earth and the history of those before him who struggled to prove and test the facts he’s now teaching. Other times, he comes (literally) back down to Earth. In the premiere episode, he ends the hour standing on a rocky shore where Sagan once stood and displays his late predecessor’s ancient datebook. He opens it to a page wherein Sagan had marked an appointment with a young physics student – Tyson himself – a relates an anecdote of the great man’s generosity to his students and admirers. Tyson was being called Sagan’s heir apparent long before Cosmos came calling, but he genuinely seems to hold the responsibility here as something approaching a religious call to service.

Speaking of which, if there’s one “sign of the times” indicator as to how Cosmos might differentiate from its progenitor it’s an implied willingness to engage the enemies (professed or otherwise) of science, knowledge and reason head-on. Apart from Tyson, the other star of its debut episode is Giordano Bruno, a medieval monk who was burned alive as a heretic by the religious authorities of his time for his cosmological theories about the arrangement of bodies in space… which were, of course, largely correct. The events are told in an animated sequence where, perhaps tellingly, MacFarlane himself provides the doomed truth-teller’s voice. Never one to shy from politics in his humor, MacFarlane has often been characterized (fairly or not) as an archetypal “Bill Clinton Progressive;” i.e. a guy who finds his way to the forward-thinking side for largely self-interested reasons; so it’s not hard to imagine that being part of Cosmos is at least partially a bid for self-flattery. Almost as if he’s saying “religious moralism is at odds with my preference for hedonism, so here’s some science to knock it all down a few pegs!”

Maybe. Maybe not. But one of the overarching lessons of the new Cosmos is a genial spin on one of Tyson’s own most celebrated quotations: “The great thing about science is that it’s true whether you believe it or not.” The show wants to inform us, but it also wants to make us want to be informed – to take joy in the wonder of knowing that the near-indescribably massive phenomena it reveals to us is above all else proven, observable and real. Next to that, things like motives or personalities or squabbles over right and wrong or good and evil are often small and petty compared to the majesty around us. Unlike its subject matter, the question of “how” or “why” Cosmos got here is unimportant next to the fact that it is here… and we need it now more than ever.

Gauntlet Gets a Major Facelift For Steam