I don’t mind subscription fees. I’ve never understood the vehemence with which some people refuse to ever consider paying a recurring fee – a much lower cost-per-dollar than the vast majority of non-subscription games, let alone for one with constantly updated content? It seems like a no-brainer, really.

But then again, I didn’t understand the mindset behind free-to-play (F2P), microtransaction-based MMOGs, either. More to the point, I didn’t understand how they could actually exist. You see, MMOGs tend to be pretty pricey to operate: Not only do you need to pay artists, programmers, and designers to continually produce new content, but the upkeep costs are higher – bandwith costs money, servers and server maintenance cost money, and customer support doesn’t come for free, either.

What’s worse is that these costs are directly proportional to how many people are playing the game. For a game that runs on a subscription model, this is a non-issue – if you get a million subscribers, every single one of them is paying their share every month to help absorb the additional upkeep cost. In a F2P game, though – if you get a million subscribers, I thought, how would you ever get them to shell out some hard-earned cash for a little trinket? How could you ever ensure that they’d pay to play?

The entire model seemed entirely infeasible – at least until a year ago when my crippling love of giant robots led me to check out NCSoft’s Exteel on a whim. While not the first F2P game I’d ever tried my hand at, it was the first I’d ever seen with a genuinely compelling microtransaction system.

Let me reverse a bit – there are some conflicting ideologies regarding the use and implementation of microtransactions in MMOGs and other online games (Exteel being more like Team Fortress 2 than World of Warcraft.) On the one hand, there’s the argument that the only things microtransactions are used for should be purely cosmetic; no player should ever have an advantage over another player purely because they have real-world money to burn: Your microtransaction-bought sword might burst into flame with every swing, but it won’t do any more damage than a regular sword of the same level.

Then there’s the argument that says, “Nuh-uh, these folks are the ones keeping our game afloat! Since they’re the ones paying for development, we’ll develop stuff for them!” This model rewards those who pay with additional exclusive content, and their special Sword of Burning Flame will absolutely do more damage than an equivalent weapon dropped by a random monster. Between the two, the former model is most often found in subscription-based games that feature an additional microtransaction format, while the latter reigns supreme in F2P – after all, there’s more risk in pissing off (and losing) a customer who pays every month as opposed to someone who is literally nothing but extra bandwidth and disk space. 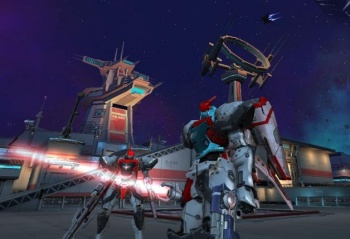 What I found in Exteel, on the other hand, was something else entirely – a middle ground between the two, so to speak. In Exteel, you start off with a dinky little mecha with the most basic equipment. Play matches, increase your rank, and earn credits with which you can purchase new, more powerful parts and gradually fight your way to the top.

Or, you could just spend five bucks and get yourself a powerful, badass-looking giant fighting robot right off the bat. A nickel or two earns you a nifty coat of dark red paint, and now that you’ve spent that, what’s another dollar for a cool-looking pair of advanced energy swords?

It’s more than just cosmetic, but here’s the catch – almost every piece of equipment and weaponry you can buy via NCSoft’s store has a near-identical counterpart in the game that you can only purchase via hard-earned in-game credits. Said equipment looks recognizably different from its microtransaction brethren, meaning that it’s easy to pick out in the middle of combat who has earned their metaphorical stripes and who has a few extra bucks to burn.

If there’s no penalty for going with the in-game armor, and earning your suit might actually earn you geek cred, why take advantage of the microtransactions at all?

The answer: Because it’s convenient. It’s the same principle that causes a WoW player to buy gold that would take him a week to farm for the cost of a few hours of work. Buying a top-end mecha in Exteel earns you no superior advantage in combat; it just means that you didn’t want to spend time on the grind.

And you know what? I’m okay with that. Hell, I understand it completely – many of those inhabiting all these virtual worlds have jobs, have families, and have lives that they don’t want to spend slogging their way to the top. It’s like a cog train on a mountain: It might be easier getting to the peak, but once you’re there, you have the same damn view as everybody else.

It’s this style of microtransaction – the Convenience Tax, if you will – that online games should consider adopting, even the big-budget blockbusters that don’t need the extra revenue. It’d be killing two robots with a single positron beam cannon, too: Why would anyone pay a third party (and hand over potentially sensitive information) for in-game cash or services when they could go to the developers instead? They’d be funding the game’s development, the official store would be able to undercut third parties at no loss, and there would be none of the negative stigma that accompanies gold-buying or power-leveling today.

Still, maybe they should make the in-game sword burst into fire when swung, or something like that. Just be wary of pissing off the hardcore – otherwise, they might start internet petitions. And we wouldn’t want that, would we?