Whenever one has a conversation about MMOGs these days, the subject matter is always dominated by the big titles – the games that have hundreds of thousands of subscribers. WoW is, of course, the biggest name with its eleven million active subscribers, and EA is clearly hoping for a multi-million playerbase with BioWare’s The Old Republic, but we’re all familiar with the other (relatively) big titles of Aion, Warhammer, LotRO, and Conan.

There’s a reason that the popular titles dominate the discussions – they’re the movers and the shakers in the industry. But a game doesn’t need to be huge to be successful. Hell, one might even say that a new game that shoots for the stars could wind up just shooting itself in the foot. But there’s a common tendency in people to associate pure numbers with success, and that’s something that we need to stop doing. It’s not that bigger numbers aren’t good, but rather that small numbers aren’t necessarily bad.

I spent this last weekend in Las Vegas for the Sony Online Entertainment Fan Faire, a gathering dedicated to SOE’s various MMOGs. Of these, EverQuest II is certainly one of the bigger games on the market, but SOE is hoping to have two upcoming hits in DC Universe Online and The Agency. But what about the rest of them? The venerable EverQuest may have been one of the grandfathers of the MMOG space – and the market leader in its heyday – but how many people are playing it right now? How many people are logging into Star Wars: Galaxies these days?

As anyone who attends an event like Fan Faire can tell you, a smaller community doesn’t have to be an inactive one. The people who are still playing older games like Dark Age of Camelot, EverQuest or even Ultima Online are the ones who really love the games. When most of the playerbase has evaporated, the ones remaining form a small, dedicated, and tight-knit community. The SWG and EQ players were there in full force, and so were the Vanguard players – all twelve of them!

The players support the game, and so do the developers – they just announced the seventeenth EverQuest expansion. So however many people are still playing EQ, it’s enough to keep the servers on and fund further content development.

That’s the crucial mark for an MMOG: equilibrium. The number of people playing your game ultimately doesn’t matter as long as it’s enough to cover costs (and hopefully turn a profit). That’s the only number that matters. Obviously, this number depends on the game. If you’re sinking hundreds of millions of dollars into a game like The Old Republic, you’re going to need to make hundreds of millions of dollars back, which means you need millions of subscribers. 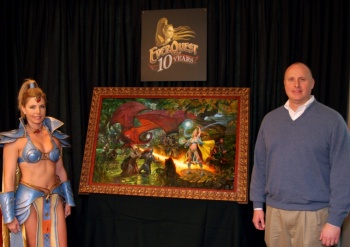 Last year at the first Triangle Games Conference, Atomic Games boss Peter Tamte spoke of the difficulties involved in developing big-budget titles in the videogame industry as a whole. It wasn’t uncommon to have a game that needed to sell a million copies just to recoup costs, he said, which meant that actually turning a profit on these large-budget titles was by no means a sure deal.

In response to this (and the struggling economy), said Tamte, you were seeing many developers switch tracks and create lower-budget titles that didn’t need to sell a buttload of units in order to break even. Working on a $15 XBLA or PSN title may not have the glitz and glamour of working on the latest Next Big Thing from Large Publisher X, but it’s also much easier to earn back what you spend and keep the lights on in the office.

Given how prohibitively expensive the major MMOGs are to develop and maintain – I’ve heard figures as high as $200 million for SW: TOR – it almost makes more sense to follow the XBLA model in the massive space. Make something small and cheap, and only shoot for as many people as you need. To be fair, it isn’t like this is a new idea – so-called “boutique MMOGs” have been around for quite some time now – but it makes much more sense for a startup developer to try something like this rather than trying to join the major leagues right away.

It’s almost impossible to be WoW, and if you try to replicate its success you’ll end up almost needing its success to be profitable. When that success almost inevitably fails to materialize, then you have a problem on your hands. If you try to be WoW, there’s a good chance you’ll just end up being Tabula Rasa.

I’ve thought that smaller boutique MMOGs were a good idea for a while, but spending the weekend at SOE Fan Faire only magnified that. The people there loved their games, they loved logging into their worlds – a MMOG doesn’t need to have millions of players to be beloved.

As events like Fan Faire show, it’s still perfectly possible to have a healthy and passionate community in an MMOG even if it isn’t one of the big kids on the block these days. As long as it keeps the servers running, and as long as your community is having fun, where’s the problem?

The higher you try to jump, the worse the landing is if you fall – sometimes it just makes sense to aim small. Though MMOG headlines may be dominated by WoW and its hopeful #2 The Old Republic, this may well be the future of the MMOG space.

John Funk apologizes for the earlier dig at Vanguard. The game probably has at least twice that many players.