The firestorm that erupted two weeks ago when Blizzard announced that it would be displaying posters’ real names on its forums has since died down, in no small part due to the developer changing its mind on the matter. My own feelings on the issue were decidedly mixed. Yes, there were more than a few potential problems that could crop up from having your real name displayed on the WoW forums for all to see, but there was also a common refrain I hadn’t expected:

“I don’t want my employer/friends/significant other/family to know that I play WoW.”

What was more surprising than the sentiment alone was just how often I saw it being said. Dozens if not hundreds of people didn’t want their friends, family and coworkers finding out that they logged on to WoW every night to assume a virtual identity as a dwarf warrior or an orc shaman adventuring in Azeroth. They were ashamed of the very idea. As a lifelong gamer, that comes very close to breaking my heart.

Why should we ever be ashamed of our hobby? We’re all gamers here, we love games of uncountable shapes and sizes. We’re quick to defend this passion of ours against all comers, too. When a film critic says that games will never be art, we talk about the games that have affected us profoundly. When an Australian attorney-general stands in the way of a proper 18+ rating in his country, we point out that the average gamer is in his thirties.

And then when someone asks us to have our real names attached to our gaming habit of choice, we dive under the covers like a pubescent kid hiding a purloined Playboy.

Yes, it’s true that games – and gamers – have a bit of an image problem in the media. If you haven’t played a game since Pong, maybe the only exposure you have to the games of today is when you see a news story pop up on CNN about somebody getting shot over a videogame (also known as somebody getting shot when there’s an Xbox 360 somewhere in the room). Maybe the only exposure you have to WoW is the South Park episode that skewered it and stories about your friends’ kids who won’t stop playing online.

Is this really how we want our hobby to be represented? Yes, there are horror stories about people who lost their lives to MMOGs, but then we have people like the Starbucks CIO, who became the youngest executive at a Fortune 500 company and attributes his success to leadership lessons he learned running a WoW guild. We have people who have found genuine soulmates and lifelong friends via online gaming – hell, that’s how I got my job here in the first place.

Don’t we want those to be the stories that represent this hobby we love to the outside world? That shouldn’t even be a question – of course we do. But that can’t happen until we’re ready to be gamers in public. Unless our bosses see that the model employee who comes in to work on time every day is the same guy who leads a WoW raid three nights a week, how can we ever expect them to understand that these games are for responsible adults, too? 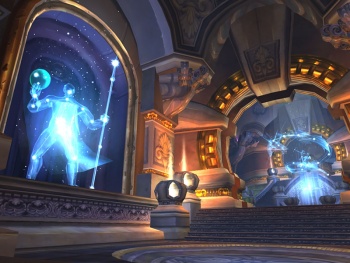 We can’t. As long as we keep acting like a gaming hobby is something to hide, it will be. We know that games are just as much for adults as they are for kids. We know that they can be profoundly enriching experiences. We know that gaming is as perfectly acceptable a hobby as being a film buff or a sports fan.

So why do we keep acting like it isn’t?

I’ll readily admit that my viewpoint on the matter is skewed thanks to where I work. At my job, being a gamer isn’t a hindrance, it’s pretty much a requirement – and it’s an office full of gamers. It’s also a business staffed by largely responsible adults who can buckle down and get their work done like professionals … who happen to sit down in front of Red Dead Redemption once they’re out of the office.

We aren’t alone, either. There are millions of people across the world who have grown up with Mario and company and who hold a steady nine-to-five. They balance their families and real-world responsibilities with their virtual careers slinging guns and slaying dragons. These are the people who we want to be the face of our hobby. Yes, we do ridiculous things – but were you watching the World Cup? It’s perfectly acceptable to strip naked and cover yourself in thick coats of paint, but not to assume the identity of Ayla Moonblossom the night elf druid.

The difference is visibility – and time. Time, at least, is on our side. Sports are an ingrained part of our culture; parents root for teams and raise kids who root for the same teams (or their rivals, if they’re feeling rebellious). Likewise, gamer parents raise gamer kids, and it won’t be long before those gamer parents are gamer CEOs and executives – if they aren’t already. The ticking of the clock is good news for us, but without the “visibility” part, nothing will change. Games like Rock Band, Wii Sports and even FarmVille show people who don’t play games that they aren’t all Grand Theft Auto, but the rest is up to us.

The RealID plan had more than its share of downsides, yes – but maybe it would have provided those first few crucial rays of visibility. Maybe you’d have found out that the coworker who you didn’t want to learn about your TF2 addiction had a level 80 Tauren hunter. And maybe your coworkers would realize that the you who played videogames and the you who showed up every morning to earn an honest day’s work were one and the same.

Videogames can be for people of all ages, and you and I both know it. But the longer we drag our heels on openly being gamers to the people in our real-world lives – and acting like it’s something to hide – the longer the faces of our hobby will be hate-filled youth on Xbox Live screaming obscenities. I don’t want that, and neither do you.

If we, the ones who should know better, act like our hobby is something to be ashamed of, then how can we expect anyone else to think differently? If we’re not going to act proud of what we love, who will?

Gaming is for adults, too. It’s time to start acting like it.

John Funk can’t think of a witty byline this week.