It’s hard to admit, but even though I’ve largely considered myself to have “grown out” of the period when I was a huge fan of Japanese RPGs (from ’98 to sometime around ’04), I still look back fondly on games like Final Fantasy X and Chrono Trigger (and yes, Chrono Cross) and am finding my interest increasingly piqued by next year’s Final Fantasy XIII.

But if there was any one thing that I’d love for my MMOGs and Western RPGs to take from their Japanese counterparts, it isn’t the (admittedly gorgeous) graphics and (even more gorgeous) pre-rendered cutscenes, nor is it the more static and fixed methods of character advancement, and it certainly isn’t the reliance on watching (or reading) a story, rather than playing a role.

My favorite memories of these classic JRPGs are often inextricably tied to their equally-classic tunes, and foremost among these are the battle themes. Fighting a boss in these games was a big freakin’ deal, and the music let you know it – and as evidence, I present to the court Final Fantasy VI‘s “The Decisive Battle,” Final Fantasy VII‘s “Fight On!“, and Xenogears‘ “Knight of Fire.” If you’ve played any of those games, chances are that those songs have the same effect on you as they have on me: “Oh god, oh god, where’s the save point?!”

Beyond the music used for multiple boss battles, though, there was music specific to the unique storyline bosses. Chrono Trigger‘s “Battle With Magus,” Chrono Cross‘ “Dragon God,” and Final Fantasy X‘s “Seymour Battle” all evoke powerful memories of facing down the big bad guy which you struggled against for a long time. And this is to say nothing of the gigantic, bombastic final boss themes complete with the requisite Latin-chanting chorus. As overplayed and – to be frank – overrated as Uematsu’s “One Winged Angel” is, it does have a powerful effect of making the player feel like they’re at the end of a long, rough journey.

Where is the equivalent to these compositions in Western MMOGs?

This isn’t to say that MMOGs don’t have good music – far from it. To focus on the big dog in the park, Blizzard’s in-house composers are phenomenal. The game has always had a fantastic soundtrack with songs like “Call to Arms,” but the score to Wrath of the Lich King is particularly excellent and evocative. The accompaniment is grand and sets the stage perfectly in zones like the Dragonblight and the Storm Peaks, and I’d be doing the game’s music a disservice if I failed to mention the utterly mindblowing “Arthas, My Son” from the intro cinematic. It’s clear that the composers are more than competent – so where’s my awesome boss battle music, huh? 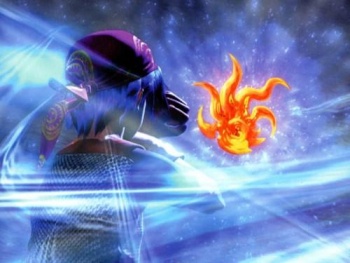 The comparable “boss battle” themes that the game does have (see: Naxxramas) are all very atmospheric; they’re good for setting a mood but not for much else. Perhaps that’s simply a consequence of how the two genres treat bosses differently. In a single-player JRPG, a boss marks a finale to a section of the plot, and is a one-time event. In other words, you won’t be going back to Seymour Guado once you’ve beaten him in hopes of getting better loot (Ok, ok, maybe that was a bad example.) Meanwhile, MMOG bosses are mere obstacles to be surmounted, many with very little plot relevance, and many who can be “farmed” in hopes of getting the loot that you want.

Furthermore, because high end raid bosses require absurd amounts of communication, a lot of players might not want epic music getting in the way. After all, it’d be very hard to enjoy the ominous Latin (or Latin-esque) choir of a song like “Liberi Fatali” if you were yelling at people to stay out of the patches of fire on the ground. But that hasn’t stopped some games from adding their own balls-to-the-wall-awesome boss battle music – take “The Roars of the Warrior” from NCSoft’s Aion. That’s the sort of song that I’d love to hear more of when fighting an apocalyptically evil villain who aims to conquer the world, but maybe that’s just me.

To Blizzard’s credit, the designers have added more of this kind of thing with the background music to the Crusader’s Coliseum (or, for that matter, “Bronze Jam,” the electric guitar music that plays when you’re fighting a boss reminiscent of a certain late Godfather of Soul). But these tiny steps are just the beginning, and if games like WoW or BioWare’s upcoming The Old Republic can deliver on having mind-blowing and memorable boss music then that’ll be one thing I can cross off my “ultimate MMOG check list.”

Because hey, do you really expect to enjoy lightsaber duels that don’t have something like “Duel of the Fates” backing them up? Yeah, I didn’t think so.

John Funk never really liked “One Winged Angel” all that much.