Back in high school, one of my crazier teachers once posed the class a philosophical question: What is the difference between a chair and a stool? “What kind of philosophical question is that?” we responded as one. “A chair has a back, and a stool doesn’t.” Aha, said my teacher, but what if I took a stool and added a one-inch back? Would it be a chair then? What about two inches? Can you give me a concrete point at which a stool becomes a chair?

In that vein … when does an Multiplayer Online Game become a Massively Multiplayer one? That depends on the measure of an MMORPG: What sets it apart from its non-Massive brethren? Well, that could be a column in and of itself, but for convenience’s sake, let’s use the Wikipedia definition: “MMORPGs are distinguished from single-player or small multi-player RPGs by the number of players, and by the game’s persistent world, usually hosted by the game’s publisher, which continues to exist and evolve while the player is away from the game.”

The more I look at this definition, the more I think that Cryptic’s Champions Online is a major step towards blurring or abolishing these lines – in fact, the game is barely an MMOG. Oh sure, Champions definitely has the trappings of an MMOG: You create a character, do quests, get experience to level up, and collect phat lewt. However, when you look at it in the context of the above definition, it doesn’t quite fit the bill – and the reason for this lies entirely on how the game splits up the playerbase.

Let’s rewind a bit to see why. Back in the days of yore, when the first MMOGs started popping up, hardware and bandwidth limitations resulted in the concept of a “sharded” universe. A sharded world would be exactly what it says on the tin: A playerbase divided into server “shards,” with a smaller population to play with. Your servers might not be able to handle all 5,000 players at once, but if you made ten shards with 500 apiece, that was much more reasonable.

This is the model that almost all MMOGs have used since then, because it makes sense. Not only does sharding your world make it significantly easier to cram a population of several hundred thousand into virtual real estate the size of Central Park, and lighten the load on your servers, but it also helps foster a sense of community. “Oh hey, you play on the server Skull Throne? I have an alt character there – I’ll send you a /tell next time I’m leveling him up!” You make friends and enemies simply by existing in your little shard of Norrath or Britannia, or wherever you are.

Champions, on the other hand, doesn’t do that. In fact, the entire game is actually instanced – when you move from zone to zone, it gives you a pick of “Millennium City #49” or “Crisis in Canada #14.” You can see how many players are in each little instance, and you can choose whether or not you want to join a zone packed full of hustle and bustle, or want to go someplace more sparse where you’ll have less competition for quests. 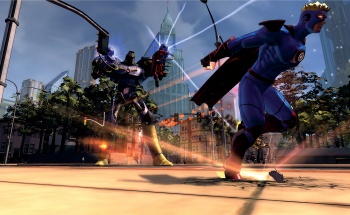 It’s an interesting approach, and it’s easy to see why they did it: Not only does it theoretically give the player more choice in where they want to play without rerolling a new character, it also prevents the nasty server queues that seem to accompany any popular MMOG. Champions won’t ever have the problem where they need to transfer population from a shard filled to the brim to a shard that’s more like a ghost gown.

Interesting and functional, certainly. But it’s not MMOG-ish at all. The two key points, going back to that definition at the top, are the number of players and the persistent world, and Champions has neither. As far as players are concerned, the game might have hundreds of thousands of subscribers, but you’ll only ever be with a hundred at the same time – tops. Most of the instanced locations don’t have anywhere close to that. If you’re playing in a Burning Sands with 60 other people, that’s just barely twice the population of, say, a popular Team Fortress 2 server. That’s hardly Massive at all – what good is having thousands upon thousands of subscribers if you only ever get to see a handful of them?

Nor does Champions necessarily pass the persistence test, either. This one’s a bit trickier, though – as far as I can tell, individual zones are persistent. If I’m determined to always go back to Millennium City #27, I can, and it’ll be the same Millennium City I know, always going on without me. But that’s assuming that I manually pick every time. What if I just let the game shunt me into a zone it picks, one that might not be the same one I originally came from? It might be the same, but the people you play with won’t – unless you have a cadre of friends devoted to a particular instance shard, your persistent world will never have a persistent playerbase.

So no, by this definition, Champions isn’t an MMORPG … but saying that sounds a bit absurd, don’t you think? After all, the developers clearly intended for it to be an MMOG, just implemented in a way that circumvents some of the major problems of the genre. And in doing so, they may have inadvertently helped to blur the lines between what is and what is not a Massively Multiplayer game. By the strictest definition, Champions Online might not qualify as an MMOG, but maybe the problem isn’t with the game – it’s with the definition.

Where do we draw the line? Going back to Team Fortress 2 – it has empty servers and full 24/7 rounds on 2Fort, persistent worlds just like those in Champions, with a similar number of people. So yes, as Obi-Wan Kenobi might put it, even TF2 is an MMOG … from a certain point of view, anyway. Hell, does there even need to be a line? Does it actually matter what we call a game, or does trying to fit games into niche labels just narrow our mindset?

Think about it, and get back to me when you can tell me when a stool becomes a chair.