It is said, in The Lord of the Rings, that the dwarves of Moria “delved too greedily and too deep” and thus awoke a great evil from the depths. If this isn’t the first thing that runs through your head as you break through to a dark cavern in Minecraft, perhaps you shouldn’t be playing at all. There’s something primeval about finding a rich vein of iron ore only to hear the tell-tale groans of a nearby zombie or – even worse – the urgent hissing of a creeper. 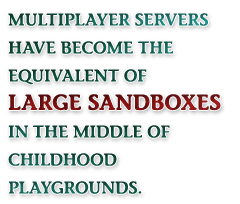 But survival mode, as this is referred to, hasn’t been implemented in the multiplayer aspect of Minecraft. There are a few too many bugs for it to be released to the public just yet, though Notch, creator of the game, insists that it will be along shortly. Even with the game being in Beta and without survival mode in it, the multiplayer is a robust enough component to have provided for a multitude of servers in the various corners of the internet for those who wish to seek them out.

What is it about Minecraft‘s multiplayer that has drawn so many of the denizens of the web to traverse through its randomly-generated biomes? Lacking the normal progression and definition provided by the survival mode of the single-player experience, the multiplayer should have collapsed in on itself with players having but a small amount of what they can do offline brought to that arena.

Crippled as it is by the removal of a major portion of the game, the ability to build, destroy and explore with friends has allowed the game to somehow flourish through adversity. Multiplayer servers have become the equivalent of large sandboxes in the middle of childhood playgrounds, a place for all shapes and sizes to come and mold the landscape to their will.

Which begs the question: Does Minecraft count as a massively multiplayer online game? The world that’s created with the server is persistent – everything will still be there when the last person logs out and will stay there as long as the server’s alive. More than just the logistics and servers, though, the players themselves actually fit snugly into the categorical archetypes provided by Richard Bartle’s test of gamer psychology.

Richard Bartle is a name that anyone involved in the game design industry should be well aware of by now. Not only was he a member of the duo that created the first MUD, or multi-user dungeon, but he also detailed the major types of players that were active within these kind of games, first in 1990 and then with an extension of his thesis in 1996. The article speaks for itself, really, and it should make clear that Minecraft players certainly fit the description of the types of gamers in what Bartle refers to as multi-user dungeons.

The four archetypes, as presented by Bartle, are as follows: Achievers, Explorers, Socializers and Killers. He goes on to compare them to the four suits in a pack of cards, with Achievers being Diamonds, Explorers being Spades, Socializers being Hearts and Killers being Clubs. Diamonds seek treasure in ever-increasing amounts, Spades constantly attempt to unearth knowledge, Hearts tend to empathize with fellow players and Clubs, well, hit people.

All four suits are represented within every server population with perhaps only Clubs being slightly less-so. Spades certainly seem to be the most prevalent, what with the world of Minecraft being without a naturally occurring end, with Diamonds being close behind as building and gathering bigger and better structures and raw materials is essentially the premise of the game. Even then, Hearts could be argued to be the most represented of the suits and are not entirely exclusive to their single categories. In fact, the test that was derived from Bartle’s work actually allows for a total of two-hundred percentage points in order to allow for varying degrees of interests along different lines of player archetypes. 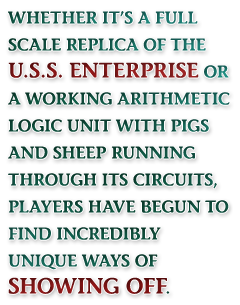 For example, it’s rare to have an entirely pure player of any one suit. A pure Diamond wouldn’t particularly care about Hearts recognizing their achievement; it would be good enough to know that they did better, built bigger, taller or more interesting things than anyone else. Typically, Diamonds have a bit of Heart added to them that showcases this affinity to brag. They don’t just want to be the best. They want everyone to know they are the best.

It can be hard to be a Diamond of any real magnitude with just the game to rely on, though. Server populations are not anywhere near as full as some of the traditional MMO games from major developers. In order to circumvent this limitation, Diamonds have begun to capture videos of their creations for YouTube. Whether it’s a full scale replica of the U.S.S. Enterprise or a working arithmetic logic unit with pigs and sheep running through its circuits, players have begun to find incredibly unique ways of showing off.

Spades, on the other hand, have taken to producing walkthroughs steeped in their knowledge of the game. They range from how to build a home for the player’s first night in Minecraft to how to effectively dig deep underground in order to leave no unlit areas that are connected to any base of operations. They promote proper crop planting and spread the secret of infinite water. In many cases, these videos and the crafting Wikipedia that’s sprung up are the only resources that give new players any kind of real information at all.

Probably the most hated of all archetypes within the grand society of Minecraft is the Club. In general, Clubs have the most difficult time from the very beginning as there are no tools in the game that directly benefit their style of play. In an ever-expanding universe with no survival mode, Clubs don’t even have the environment to act against, and even if it were enabled it would be a small consolation to actual competition with real players. It’d be like eating spam when they really wanted honey-cured ham.

The only way Clubs can participate in their preferred type of play is to use the one and only option available to them: destroy the works of other players. This kind of play verges on griefing, especially if done multiple times on the same server, and it’s rare for a known griefer to be allowed to roam around for very long. So the pure Club often doesn’t get a chance to play on a single server enough to derive any real amount of satisfaction.

Instead, a more acceptable form of griefing has arisen in its place. Clubs will find a server, find someone’s prized construct and then add to it in seemingly random ways in order to destroy the aesthetic without breaking down the components of it. If you were to ask someone who participates in this watered down version, they may even deny that it’s griefing or Club behavior at all. Whatever they want to tell themselves is fine, but adding to the existing structures in a given landscape in such a way that makes the original builders displeased is not exactly a kind gesture in the eyes of others.

Even with the Club population, though, it takes a bit of socialization in order to find the right server that would allow for a Club to work their magic. Even in the darkest, griefing heart of the clubbiest Club, there is a Heart hiding somewhere. Diamonds, as mentioned above, feel the need to talk with other Diamonds and find the best way to do things, which delves into the territory of Spades who are looking to learn things as well.

The suits are constantly overlapping each other and melding with aspects of at least one other of the four in ways that make it hard to distinguish a single aspect in a player. The different markers for each suit are simple enough to distinguish, but the blending tends to produce markers that are hard to pin down on one side or the other. It’s often more complicated than that even in a game as seemingly simple as Minecraft.

Richard Bartle titled his paper “Players Who Suit MUDs” as a clear reference to the suits in a deck of cards. Essentially, he argues that the kind of players who play MUDs can fall easily into the four categories he presents. More than just providing a way to differentiate between types of players, though, he also provides a definition for multi-user dungeons based on the players within them. By extension of what multi-user dungeons have become over time, he has also provided the definition of massively multiplayer online games.

Minecraft has the capacity to support all of the archetypes presented by Bartle and fits the definition provided of multi-user dungeons and thus massively multiplayer online games. Its popularity doesn’t hinge upon a narrative overlaid on top of the mechanics but on the ability to shape the world with friends using cleverly designed tools. Diamonds, Spades, Hearts and Clubs all utilize the same building blocks to derive fun and amusement.

And really, Minecraft is nothing but building blocks.

James Bishop is a mild-mannered English graduate by day, by night he writes for Hellmode. Sometimes he tweets too. (@jamesbishop) If you’re not one of those, however, he also has a website where he absentmindedly chronicles his various doings and writings.