Some might call the Imperial City the jewel of the land of Cyrodiil. Seated in the middle of majestic Lake Rumare, the ring-shaped city is dominated by the image of the imposing White Gold Tower, which looms high above places like the Arboretum, Waterfront, and Arcane University. It’s almost like you could walk right in to the imperial grounds and speak with the Chancellor, the new head of state after the untimely death of Emperor Uriel Septim VII. 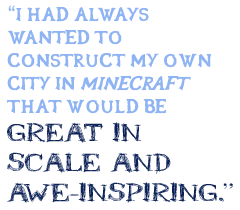 But you can’t, because this wouldn’t be Oblivion. This would be in Minecraft.

To be specific, this would be a full-scale model of Oblivion’s Imperial City, recreated in indie sensation Minecraft – and unlike many of the other (deservedly celebrated) projects that Minecraft-ize things like the floating city of Columbia or the Starship Enterprise, its creators are building it the old-fashioned way: mining it out, brick by brick.

“What makes this project unique to others, is that we’re building it in Survival Multiplayer,” virtual architect Lionheart_1 told The Escapist. To Minecraft laypeople, this means the builders have to do everything by hand, rather than use level editors or specially designed programs as shortcuts. “Every block will have to be carefully placed (or carved out of the ground), with the added complications of gathering the materials needed and avoiding the havoc that mobs bring.” So while volunteers can come help out or admire the team’s handiwork, this also means that the project is “constantly running the risk of griefers or creepers getting too nosy and setting us back during construction,” explains co-creator Lathania.

With all the risk and necessary effort involved, why tackle a monumental project like Oblivion‘s Imperial City it in the first place? “My previous project was a rather large cathedral that had its own technical difficulties, such as trying to construct vaulted roofs. So, by the time it was nearing completion, I was looking for a completely new challenge,” says Lionheart. “I had always wanted to construct my own city in Minecraft that would be great in scale and awe-inspiring, so I began scouring my brain for cities that I could either draw elements from, or re-create. The Imperial City fit both criteria. Besides, I’d love to call the city ‘home.'”

“I had spent so many hours immersed in Oblivion, with its lush environments, extensive lore and grandeur, that when I was trying to think of a new project, it immediately came to mind for inspiration. That both games shared a common bond in terms of, ‘This is the world, go out and have fun,’ just made it a logical choice as well,” he says. The announcement of The Elder Scrolls V: Skyrim several weeks after work had started on the project provided further impetus to get things done.

With a project of this magnitude, “further impetus to get things done” can’t be underrated. Lionheart’s initial planning and explorations of what it would take to recreate the Imperial City at a 1:1 scale led him to a daunting realization: To complete a project of this magnitude, the team would have to mine an area of 500×500 blocks all the way down to bedrock – or, roughly 1.25 million blocks. “At this point, I almost quit planning it … [luckily] we have other people on the project who are just as crazy as me.” In fact, the sheer scale of the project was what attracted Lathania to it in the first place – Lionheart and co-conspirator Blackadder51 were initially keeping their plans secret. 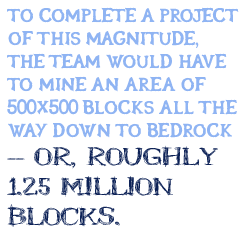 Obviously, a project this big can’t be completed by just one person, or even just three people – but divvying up the work helps. Lionheart is the grand coordinator, the architect in charge of planning the construction and advising any volunteers on how to help out. Blackadder is in charge of moving materials to where they’re needed as well as keeping the community updated and recruiting more talent, and Lathania? He blows things up – flattening the construction area down to its bedrock with skillful use of in-game TNT. “Of course, none of our roles are straight forward and whenever one of us needs assistance the other two plus our volunteers always lend a hand,” he says (in between detonations, one imagines).

“Basically, it’s the thrill of digital Lego,” thinks Blackadder – of getting to create and destroy what you see fit. “Minecraft is a true sandbox game, in that it plops you in an endless world and says ‘Go nuts!'” Without limitations beyond the technical, players can shoot for the sky. “There’s also the nerdy sense of pride when you finally lay down that last block; it’s a special feeling. No other game can come close to this, since it offers genuine freedom.”

Lionheart, however, believes that Minecraft‘s success lies in the community that has coalesced around it. “Whenever anything is being built, there’s always someone willing to help out. Roleplaying servers also exist, with economies, guilds and even nations. It’s refreshing playing a game where cooperation is freely given without any incentive, and the only reward is the satisfaction of completing a project together.” Perhaps unsurprisingly, Lathania – the one who was attracted to the project because of its sheer magnitude – thinks that the game’s appeal is due to its unfathomable sense of scale. Every Minecraft world is roughly eight times the size of the world to scale, he says, and since it’s randomly generated no two maps are ever the same. “Some of the landscapes that are generated are absolutely mind blowing … [it’s] a big game,” he says. 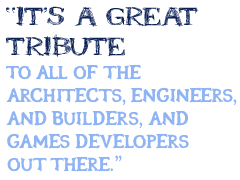 Minecraft is obviously many things to many people, but there’s a community of players just like the ones working on the Imperial City project, who just seem to want to rebuild things that already exist (whether in fictional worlds or the real one) rather than striking out and creating something completely unique.

That’s not a bad thing at all, says Lionheart. “I’d like to think that’s a deep appreciation of the imagination and design behind many of the real-world objects we know about, and the games we play. I’ve seen examples of people building the Coliseum, York Cathedral, and even the world map of Zelda: A Link to the Past. One person from our server previously made the character sprites from a number of Final Fantasy games.”

“It’s a great tribute to all of the architects, engineers, and builders, and games developers out there. And, in some respects, it’s a way in which we get to share in the experience of constructing these objects and claiming a little ownership of them for ourselves,” he says.

So after the monumental task of recreating Imperial City is done, what would its creators like to claim a little ownership on next? Lathania is of a similar mind to the person who recreated Zelda: A Link to the Past. “I’ve always wanted to replicate a 1:1 scale of the Fire Temple from Legend of Zelda: Ocarina of Time,” he says, and that’s certainly a better choice than the thrice-damned Water Temple. As for Lionheart and Blackadder? “Maybe the Normandy from Mass Effect,” says Lionheart. “I absolutely love that game, and the project would be tad smaller than one we’re currently doing.”

A bit of an understatement.