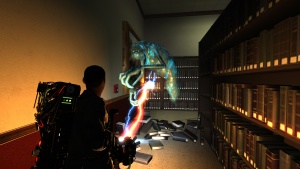 In a move likely to raise eyebrows, Activision’s main publishing arm said it was dropping all but five of Vivendi’s games, leaving the fate of several key titles uncertain.

Activion Publishing said the only Vivendi Games franchising coming under its purview are Crash Bandicoot, Spyro the Dragon, Ice Age, Prototype, and one unannounced game.

Therefore, titles such as Ghostbusters, Chronicles of Riddick: Assault on Dark Athena, World at Conflict: Soviet Assault, 50 Cent Blood on the Sand, Zombie Wranglers, and Leisure Suit Larry: Box Office Bust are up in the air.

While Activision Blizzard also owns other publishing venues, none of them laid claim to publishing the orphaned titles.

In a perhaps related development, a panel on the Ghostbusters title scheduled for Comic-Con International last week was canceled without explanation, even though a playable version of the game was on display.