We all know that there’s no such thing as magic. But there was a time not so terribly long ago when the existence of magic, wielded by men of great learning and great piety, was common knowledge, something to be respected and feared. It was very real, it was very potent, and it was everywhere. 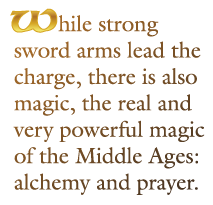 That’s the hook in Darklands, the 1992 Microprose release that was billed as the first “true fantasy role-playing game.” Casting aside the usual sword-and-sorcery-scapes so common in RPGs, Darklands is set in 15th-century Holy Roman Empire, with a twist. “Darklands is fantasy because whatever people of the era imagined was possible, now really is possible,” Arnold Hendrick wrote in the “Designer’s Notes” section that wrap up the game’s beefy, beautifully-crafted manual. “Much care was taken to make this world be the real 15th century, as perceived by its inhabitants.“

It’s a world as dangerous and as wondrous as any dungeon master’s creation, packed with fantastical creatures, roving bands of adventurers, and plenty of magic, yet one that would also be very familiar to the people of the day. Thugs, thieves, and raubritter, the infamous robber barons who waylay travelers to demand exorbitant “tolls” or worse, are common, as are beasts like bears, boars, and wolves. But the real trouble awaits those daring enough to venture off the roads and into the unknown of the thick, shadowy forests.

Giant spiders, werewolves, and tatzelwurm, two-legged lizards with powerful, stinging tails, lurk in the darkness waiting to spring upon the unwary. Hulking, hairy, simple-minded schrat are a constant threat, especially to women, as are the small but vicious kobolds that seek to kill any humans who intrude on their subterranean homes and which grow even more dangerous when ruled by cunning dwarves. Even worse are the hellhounds, gargoyles, and grotesque demons that signal a devil worshiper is nearby – or possibly even an entire cult. Powerful witches cast curses to sow illness and death among frightened villagers, and despite the dissolution of their Order in the early 1300s, even Templars, knights of the most notorious heretical cult of them all, still wander the land.

And for those foolish enough to seek them and unfortunate enough to find them, there be dragons lying hidden in the darkest, most remote corners of the land, awaiting Armageddon when they will rise and fight with the forces of the Antichrist. Not creatures of nature, dragons are the embodiment of pure evil, driven by a perversely insatiable hunger. The mere existence of these heralds of the apocalypse spreads sickness and pestilence throughout nearby lands, yet to hunt them is to invite almost certain death.

Holding the line against these otherworldly terrors are roving bands of mighty heroes who battle for fame, fortune, and, sometimes, righteousness. And while strong sword arms lead the charge, there is also magic, the real and very powerful magic of the Middle Ages: alchemy and prayer.

The roots of alchemy can be traced back thousands of years to ancient China, India, and, in the west, Hellenistic Egypt, from where it passed through ancient Greece and Rome. After the fall of the Western Roman Empire, the focus of alchemical study shifted to the Islamic world, which was far more rigorously systematic in its approach and documentation than its predecessors. It was during this period that many of the most important advances in alchemy were made, including the discovery of distillation and chemical reactions that led to the creation of acids and other substances.

The Crusades introduced the Islamic advances to European society, leading to a revival of alchemical studies which for a while found ready acceptance within the Christian belief system. By the 15th century, however, it had been disavowed by the Church, leading to a view of alchemy as a dark art and even to the persecution of its practitioners. Yet while the long-sought-after transmutation of lead into gold stayed stubbornly out of reach, in the strange world of Darklands there are plenty of other, more practical problems to solve. A good alchemist was a handy fellow to have around.

Alchemical magic is subtle. There are no magic missiles or giant, crushing fists materializing out of thin air to strike down foes. Instead, using formulae created by historical figures like Petrus Bonus, Nicolas Flamel, and Albertus Magnus, Darklands alchemists use marsh vapors, black bean, brimstone, “sanguine base” – the classic eye of newt, tongue of toad and even powdered unicorn horn – and other exotic ingredients to create thrown potions like flash bombs, liquid fire, and deadly, poisonous mists, or sinister coatings that improve weapon penetration, armor strength, or even the accuracy of arrows. Those who lack the knowledge to create their own mystical brews may still purchase them for a hefty price, subject to availability and, of course, provided they know the right people.

The other, purer form of magic is not that of men but of God, or more precisely the many saints who work on his behalf. Darklands portrays 137 real-world saints in all, some well-known and others very obscure. They offer a wide range of boons; Alexis of Rome, an eastern saint who lived in the fifth century Roman Empire, will improve a party’s standing with the local populace, while Drogo, who was reportedly able to bilocate, can greatly improve overland travel speeds. Some saints will improve specific skills, while others aid in the avoidance of battles or can alert adventurers to the presence of evil. In times of true desperation, a few will even provide small amounts of money.

But prayer in Darklands is more a matter of pragmatism than of simple faith. Sufficiently virtuous supplicants can entreat a particular saint for real and immediate aid, but not without cost. Divine favor is limited and must be replenished through prayer or, for those in a rush, substantial donations to a local church or cathedral. Furthermore, anyone can pray but praying effectively is an altogether different matter. Comprehensive knowledge of saints is largely restricted to those who can read and write, understand Latin and hopefully have some religious training, and the fewer saints an adventurer knows, the fewer his options when things get ugly.

Darklands was originally envisioned as the first in a series of “realistic RPGs” that would allow gamers to explore other mythologized worlds. “Let us know what you enjoyed in Darklands, what you would like to see in a sequel, and what setting you prefer,” Hendrick wrote. “There are plenty of possibilities: the Emperor in Germany has many political problems and intrigues, England and France are busy finishing the last half of the Hundred Years War, after which England falls into civil war (the War of the Roses). Meanwhile, Italy is at the peak of its warring city-states era, Vlad the Impaler appears in the Balkans (the historical figure who ultimately became Dracula), Tamerlane is conquering Central Asia, and much more. What’s your preference?”

But the sequels never came. What went wrong? 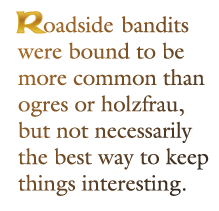 Darklands is remembered fondly by a small cadre of gamers who were fortunate enough to play it and also holds a well-deserved place on GameSpot’s list of “Greatest Games of All Time.” But the truth is that for all its originality, it was deeply flawed. Darklands was notoriously buggy and although post-release updates ironed out many of the worst problems, the lack of widely available internet meant that most gamers simply didn’t have access to them and had to put up with it in out-of-the-box condition. It was also quite dense, with a steep learning curve, clunky interface and downright intimidating amount of data to be tracked and managed.

Perhaps worst of all, it was a massive game that in spite of all its promise fell into dull repetition fairly quickly. Most quests were straight-up FedEx jobs with minimal variation; combat could quickly bog down into tedium. The most exotic and exciting encounters in Darklands were few and far between, which was perhaps true to the nature of the world – roadside bandits were bound to be more common than ogres or holzfrau, after all – but not necessarily the best way to keep things interesting.

Despite all that, Darklands was a remarkable game, just not a very successful one. Had it been, the nearly boundless opportunities to turn history into swashbuckling fantasy realms had the potential to seriously shake things up in the RPG arenas. Instead, it wound up a one-off curiosity that, for all the accolades it’s earned over the years, has exerted almost no influence on the direction of the genre. Games today look better than ever with razor-sharp details, lifelike textures, and smooth, flowing character animations, but the real world seems even further away.

Darklands came as close as any game ever has to presenting historical realism in a fantasy RPG, and for that alone it was a truly memorable experience. But the execution didn’t, and maybe couldn’t, live up to the potential of the concept. In the end, much like the medieval world it was built upon, the idea of Darklands was magical, but the real magic just wasn’t there.

[byline]Andy Chalk actually believes that magic will betray you at the worst possible moment, which is why he always plays a fighter.[/byline]