According to Pliny the Elder, the first magical books were written by Osthanes, a Persian astrologer who accompanied Xerxes on his failed campaign to conquer Greece, and who left them behind in the retreat. However, all cultures capable of writing, whether on papyrus, clay, or bark, used that skill to record their own magical traditions; when they met other cultures, they traded. These books became known as grimoires, volumes of conjurations and spells, and their history is as old as civilization itself. 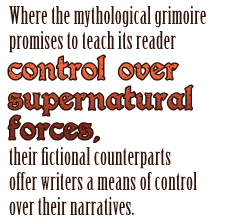 In fiction, one of the most potent grimoires is the Necronomicon, invented by horror author H.P. Lovecraft and allegedly written by the Mad Arab, Abdul Alhazred, as he detailed the blasphemous rites of the Old Ones. Lovecraft wanted to use elements of traditional folklore to create what he described as “new artificial myths.” He was more ambivalent about the consequences of his myth-making. “I am opposed to serious hoaxes, since they really confuse and retard the serious student of folklore. I feel quite guilty every time I hear of someone’s having spent valuable time looking up the Necronomicon at public libraries.”

Lovecraft’s work was built upon by other authors and also became the basis for several roleplaying games, most notably Call of Cthulhu and Pelgrane’s Trail of Cthulhu. In these games the protagonists seek the secrets of the Mythos in order to save the world, often sacrificing their Sanity in search of tomes that will teach them the nature of their enemy.

Mythologically speaking, wizards derive their power from written knowledge and can therefore draw on that knowledge whenever they wish. Making a permanent record means that, theoretically, errors are avoided. Foggy memories of what the ancestors used to do when they wanted to make it rain shouldn’t come into it. Where the mythological grimoire promises to teach its reader control over supernatural forces, their fictional counterparts offer writers a means of control over their narratives.

Lovecraft used the Necronomicon as a means of conveying information. In his short story The Hound, the protagonists realize what they’re up against only because they’ve read of such things in the Mad Arab’s text. “All too well did we trace the sinister lineaments described by the old Arab daemonologist; lineaments, he wrote, drawn from some obscure supernatural manifestation of the souls of those who vexed and gnawed at the dead.” Here the book is doing double duty, allowing the author to give a description of the thing without going into excessive detail, and hinting at a long and awful backstory, without overwhelming the reader with that backstory.

Later, Lovecraft would use the Necronomicon less as a framing device for monsters and more as a hint of the antagonists’ true nature. Merely owning the book is enough to show that the owner is up to something seriously dodgy, and wanting to read it, as Wilbur Whateley did in The Dunwich Horror, is proof of guilt; a literary equivalent of the smoking gun. In each instance Lovecraft used the Necronomicon as a means of directing the narrative, showing the reader what was really going on and hinting as to what might happen next.

Call and Trail of Cthulhu are investigative games. The characters, often with no prior knowledge or interest in the occult, are thrust into a situation that they did not wish for and then must solve the mystery. If they fail, the forces of the Mythos win, and since this usually means destruction of possibly of the entire world, stopping the forces of the Mythos soon becomes the protagonists’ only mission in life. Sandy Petersen, one of the authors of Call of Cthulhu, likened the process to peeling an onion. “On the surface, suppose that the scenario looks like it’s about a conventional haunted house. It might even look like a hoax. As the investigators penetrate the first layer, they should discover another beneath … ” Each layer in this instance being a further truth of the Mythos revealed, driving the narrative forward as the protagonists solve the mystery.

In this narrative, the grimoires, among which the Necronomicon is the most sought-after, have several roles. They’re a source of general information and spells that boosts the character’s knowledge base, allowing them to at least make an informed guess as to the opposition’s strengths and weaknesses, as well as giving them a means by which they can retaliate. This gives the players a certain amount of control over their own destiny, while at the same time reinforcing the very real nature of the threat they face.

Of course, there’s a risk. The grimoires contain occult knowledge that the characters need, but the price of that knowledge is a steady drain on Sanity, the mental statistic that defines the character’s psychological wellbeing. Lose enough of that and the character becomes permanently insane. Each grimoire carries its own Sanity penalty; the more knowledge gained, the higher the cost, with the Necronomicon being the most important and therefore the most dangerous. Again, this offers control over the narrative, but this time expressed as a negative consequence. Do the characters risk their souls to save the world, or would they rather take their chances and hope that lack of information doesn’t destroy them all?

Thus the narrative becomes a kind of balancing act: the need to preserve the self by keeping Sanity at a high level, versus the need to know more at the expense of Sanity. All this is fuelled by the grimoires, the ultimate source of occult knowledge. It’s a kind of magic in its own right – the ability to change the ongoing story permanently, by tempting the player with the ultimate sacrifice.

There are many ways to frame that sacrifice. Pelgrane’s Trail of Cthulhu: Bookhounds of London setting offers the opportunity to become a trader in the grimoires of the Mythos. The protagonists are booksellers who sell and dicker for those same Mythos tomes, trying to make their fortune by trading in damnation. Ken Hite, the author, describes it as a game about “the skeevy people who sell grimoires to people who want to end the world. Yeah, it’s the wrong thing to do, but you have to make rent.” It’s possibly the only RPG where shelfwear and foxing can be more catastrophic than a broadsword to the face. 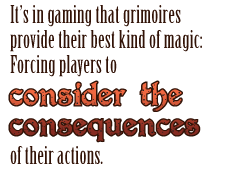 Here the grimoires change the narrative by being the focal point of the character’s day job. Before, it was a simple exchange: Sanity for knowledge. Here, the question is more complex. The protagonists don’t have to sacrifice their own Sanity. They never have to crack open a single book, if they choose not to. However, their day job brings them into contact with people who cheerfully trade off Sanity for knowledge, and who aren’t the sort to be trusted with occult wisdom. Now the narrative becomes, how close to the line will you go? Your livelihood depends on doing business with these madmen. If you take the high road and refuse to sell, they may become desperate and do something rash. Or you could make a profit and damn the consequences; not very high-minded, but bills don’t pay themselves. You could even go the sneaky route and fake a tome, making a tidy profit while at the same time hopefully delaying the end of the world, assuming that the customer doesn’t catch you at it.

Yet all the while, at the root of the campaign are those same grimoires, brimming with twisted wisdom. The greater narrative is focused squarely on them, but this time the issue isn’t knowledge in itself. The question is what to do when your personal desires for money, success, and so on, conflict with the greater good. That narrative could vanish down any number of intriguing rabbit holes, such as: What if the buyer represents the greater good? They may use their knowledge to help save rather than destroy the world. Or, what if you choose not to sell but a rival also has the same item for sale? Do you meddle in their business too, or stay silent?

In myth, the grimoire promises its owner magical power. In fiction, the grimoire also provides a kind of magic, as authors like Lovecraft use it to create artificial myths powerful enough that even today some people are convinced a real Necronomicon exists. However, it’s in gaming that grimoires provide their best kind of magic: Forcing players to consider the consequences of their actions. All the while the narrative flows on, with the grimoires acting as vital plot points. They provide clues, knowledge, and mystic power to their owners.

Of course, there’s a price …

[byline]Adam has written for Chaosium, Pagan Publishing, Miskatonic River Press and Pelgrane. A new Pelgrane project is in the works![/byline]
View Forum Comments