I’m not 100% convinced that the anime film Akira deserves to be as sacrosanct as it’s often treated (note: Yes, I’m aware that the manga is different. No, I have not read it yet. No, you will not be the first person ever to tell me that I simply haaaaaaaaaaaaave to.) It’s good, don’t get me wrong, but looking back it feels more and more like its Western fame comes more from being a lot of people’s first “real” anime experience (“Holy crap! The cartoons are killin’ each other!”) than from its actual merits as a perfectly serviceable cyberpunk action flick.

Nevertheless, it’s popular and well-known enough to be a brand, so the perpetual threat of a live-action American remake has again reared its head, yielding the predictable result of anime fans crying “Sacrilege!” and everyone else crying “What the hell is Akira?”

I’m not terribly keen on the idea myself, for reasons I’ll outline momentarily, but I’m also a staunch proponent of the idea that you can make a good movie out of anything and that “anything” includes other movies. Thinking on the matter, I can imagine a few scenarios whereby this could be a good (even great) idea, although none of them are scenarios that I see as particularly likely to actually occur (particularly since this is happening under Warner Bros., where genre movies not featuring Batman or Harry Potter go to die).

But on the way, way off chance that someone with the means to change that happens to be reading; here’s some ideas that might make an Akira remake worth watching.

A lot more classic movies than people realize are remakes/adaptations of previous material – including other films – but with different titles. At one point, “remake” (along with “sequel”) was kind of a dirty word. The poster child for this, in the West, is the classic western The Magnificent Seven, which is a remake of the Japanese classic, The Seven Samurai. Calling a remake of Akira something else (“based on Akira by Katsuhiro Otomo”) would probably defuse a certain amount of fandom grumbling right off the bat, and it’d also be the proper thing to do thematically.

See, while the name “Akira” sounds kind of unusual and exotic to American ears, it’s really a very common Japanese name. This is one of the nuances that’s somewhat lost on Western audiences – the banality of the name versus the deified tones with which it’s spoken. All these characters talking about “some guy” as though he were Christ, Mohammed, The Buddha, etc. is meant to be jarring. Since the remake is not looking to be set in Japan nor feature a primarily Japanese cast, it would only make sense to give “this” Akira an equally common Western name, such as “Adam”.

Also, let’s be real about this. As well-known as Akira might be among anime fans and genre screenwriters, in general, most of the audience has never heard of it and those that have don’t want to see a remake with Hollywood actors awkwardly calling eachother “Tetsuo” and “Kaneda” and are probably plugged in enough to know what the film is based on without the title having to tell them. The major themes and story of Akira are universal – might as well let that be an asset.

And speaking of universal themes …

Let’s not mince words. A huge part of the reason that “Americanized remake” carries such a negative connotation is the fact that American culture has been a dominant force in the world for a long time and thus said remakes carry the unwitting stigma of homogenization or, at worst, colonialism. This is made all the more extreme and uncomfortable in terms of symbolism when the characters are changed from their native ethnicity to caucasian Americans.

So maybe don’t do that?

A moment ago I called Akira‘s story universal, and I didn’t just mean in the sense that urban cyberpunk is a global genre. The specifics of the story – government experiments, telekinetic children, urban neo-religious cults – are ultimately decorations laid over a much more broad-reaching narrative of inner-city children victimized by The System that drives many of them into criminality-as-survivalism via the “family” of gang life (Kaneda) or drags them deeper into the belly of the beast (Tetsuo and the other “special” children). That’s not just Akira’s story, or even just a story of Japan’s urban-poor – it’s also a story playing out hundreds of thousands of times every single day in inner cities all over the world, including America. 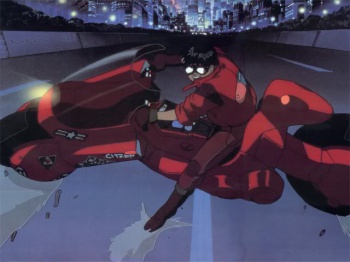 What it isn’t – at least to a large degree in the United States – is a predominantly white story.

For myriad reasons far too complex to get into here, the cold hard truth of the matter is that in the U.S. – where this remake is aiming to be set – the real-life kids whose stories mirror those of Akira‘s main characters are quite a bit more likely to be Black or Latino than they are to be anything else. This is depressing as hell and a shameful indictment of everything from ingrained systemic racism to societal failures in real life, but it does offer a way that an American Akira could be more than just another cash-grab remake – a way that it could actually say something substantial and meaningful about American culture the way the original Akira did for Japanese culture. Which is, after all, what good science-fiction is supposed to do.

Also, to be frank, non-white characters are shamefully underrepresented in the American sci-fi genre, and this would be as good a place as any to start correcting that. Kaneda as yet another angry white kid straddling his bike in the 1,000,000,000nth dated riff on the James Dean rebel schtick? Boring, dull, done to death. But Tetsuo and Kaneda as minority youths? Conflicts with The System of their dystopian future serving as a mirror for the way The System uses and abuses racial/cultural minorities (in America, sadly, almost every class issue is also a race issue on some level) today? That would be a movie worth making.

If you’re noticing a consistent theme here, it’s that unless the (re)makers of Akira are going to commit to faithfully transporting the manga/anime to live action as closely as possible, they should probably do their own thing. For example, whoever gets cast as Kaneda (or whatever he’ll be called,) the temptation is going to be to get him into the red leather capsule-logo jacket and onto a live-action facsimile of his big chunky motorcycle for a fan-reassuring teaser poster at ComiCon.

If you’re not going to recreate the entire visually-cohesive world of the original (which would be incredibly expensive), only recreating one or two distinct elements is just going to make them stick out more and look silly. The sort of fans who’d otherwise get really, really psyched to see an actor in expensively-fabricated Akira cosplay are already pissed at you for making this movie to begin with; some actor awkwardly running around what otherwise looks like any other Blade Runner knockoff in a bright red jacket is not going to mollify them and will only make everyone else wonder why a wanted fugitive is making himself so easy to find.

Akira is an R-rated story – brutal police crackdowns, mass destruction, body horror and violence against children all feature prominently. Toning it down would miss the point, and would only be attempted to try and reach a broader audience that doesn’t exist.

By and large, the PG-13 attending general public has no clue what Akira is, does not care about this remake, and probably won’t show up no matter how safe you make it. Might as well double down, go for the “R,” keep the budget reasonable and make it good enough that the semi-niche audiences who do seek out this kind of film get the word out and earn back your money that way.

This is all academic, really. The reason you’re making this is because it looks bad to have paid whatever you paid for the rights a decade ago without ever making the movie, not because anyone thinks it’s going to turn out well. You’re gonna piss away close to $100 million making a movie that’s all but destined to open in third place on an off weekend before it makes a quick trip to the dollar DVD bin and a hundred YouTube mashups about bad American remakes. There’s got to be other stuff you’d rather spend your money on, right?