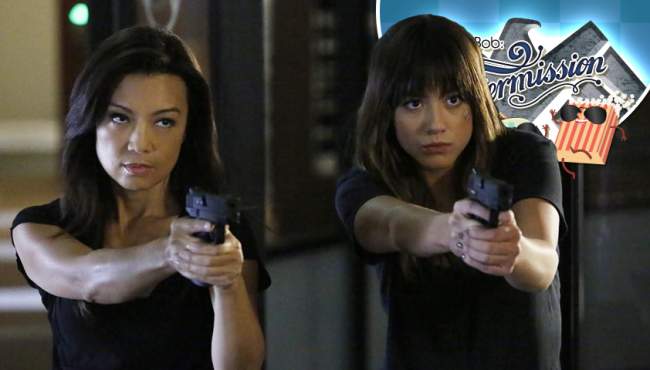 Agents is rocketing towards next week’s mid-season break — and the big reveal of just what they’ve been chasing this whole time — in “Ye Who Enter Here.”

Well. That answers that, then.

Assuming you weren’t all caught up already, “Ye Who Enter Here” serves as one part “breather” for the assembled cast to re-establish the key points of their various arcs and relationships and one part “sh** hitting the fan” to gear up for whatever the big reveals and cliffhangers next week’s mid-season finale turn out to be. In this case, the near-payoff was better than the near-setup, but it held together and if you’re onboard at this point this was a lot of the stuff you’ve been waiting for.

Before continuing, be aware we’re diving into spoilers from here on out, so a SPOILER WARNING is in full effect. If you haven’t caught this week’s episode, you can stream it online from ABC.com or Hulu, or buy the latest from iTunes or Amazon.

This was Agents back in familiar “split the team” territory: Coulson, Bobbi, Mack and Fitz/Simmons bop down to Puerto Rico to secure an antique fortress apparently built on top of the prehistoric alien (?) city which we now know has been one of the major unknown things S.H.I.E.L.D. and HYDRA have been chasing after since before anyone knew HYDRA was involved. Meanwhile, Skye, May, Hunter and The Koenigs are off to Canada to extraxt Raina before HYDRA can scoop her up.

Problematically, Raina doesn’t really care which team she ends up with, since both are heading for the mystery-city and both have need of her — alive — as one of the only people outside of Skye and The Doctor who can touch/activate The Diviner. More problematically? She also reveals that anyone not marked as “gifted” by The Diviner who tries to enter the city is essentially heading into a deathtrap. Oops.

Oh, and Ward — now with HYDRA again — is still working out his own mystery agenda; but whatever it is he still apparently plans to drag Skye along for the ride.

I can’t really speak to how the episode’s big revelatory conversation between Skye and Raina about the true nature of their “different-ness” will play to audiences not steeped in Marvel arcana, but from a perspective where both the “Blue Angels” of Raina’s grandmother’s fairytales and Guest Host being The Kree (you met them earlier this year as “the blue people” in Guardians of The Galaxy) has been self-evident for a while… in fact, it felt a bit too much like the long-game fan-teasing I thought we’d left behind in season 1. Still, yes, it was nice hearing someone actually say “The Kree,” and it probably was necessary to have Raina explicitly spell-out that no, she and Skye aren’t aliens, they’re “better” humans that aliens preferred and left a bunch of mysterious cool stuff for.

Incidentally, while it feels like there can be no doubt at this point that Agents of S.H.I.E.L.D. has been laying the groundwork for introducing The Inhumans to the Cinematic Universe this whole time, it’s now beginning to feel like they’ll be a bit different from the way the work in the comics. The traditional version of The Inhumans is an already-existing race of superhumans that evolved in secret alongside normal humans because of Kree interference. The way Raina describes the scenario it seems more like The Kree mainly set up the mechanisms to discern and (possibly) “supercharge” humans who were already gifted in some way. If so, it makes sense — as it allows Inhuman “civilians” to sub in for mutants (which is the point of all this) while also saving the “classic” characters for the Inhumans movie in 2018.

Speaking of nostalgia, though, the other “breaking into the city” storyline felt very “Season 1”-esque too, but in a good way — it’s been long enough since Agents did the “X-Files mystery turns out to be random Marvel stuff” routine that seeing Coulson, etc, picking around the “haunted” ruins was a nice throwback. Also, the still-unresolved tension between Fitz and Simmons remains a solid source of drama and the “trap” of the underground-city (it doesn’t kill you, it turns you into a rage-monster) was a novel reveal.

The standoff with Ward/HYDRA was, honestly, the least interesting thing going on this week — yeah, it’s necessary, but we already know The Bus and most of its occupants are probably going to “make it.” On the other hand it was fun to finally see two Koenigs on-screen together.

Recommendation: Imperfect and slow to start, but once it gets going it’s working a good angle.

“What They Become” promises to bring things to a head both with S.H.I.E.L.D. vs HYDRA and the Inhumans setup — but try not to look too surprised when they all-but inevitably cut to “to be continued” right before the reveal of what Skye, Raina, etc “become.”