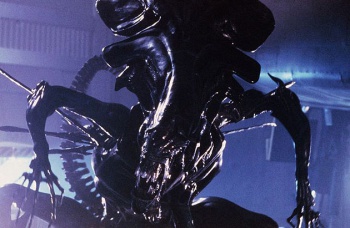 In an article posted this week, The Escapist’s very own Schuyler J. Dievendorf suggested that Aliens served to ruin a potential horror franchise, undoing the good of Ridley Scott’s classic Alien by focusing on action and stepping away from characterization. While Schuyler offers an interesting – and very well written – perspective, I feel compelled to offer a rebuttal, as I can’t say I agree at all with him.

First of all, I’d argue that if Aliens did indeed “ruin” the franchise that is Alien, it also served to preserve Alien as a single, unique movie. Rather than simply give us a continuation of the first film, a retread of established ideas, it took the premise in a wildly new direction. We complain about the cowardly franchising of intellectual property, as movies spawn sequels that do nothing but stick to safe, well-worn paths, afraid to offer the audience anything new lest they wander off in search of the familiar. In spinning off into an action setting, Aliens preserved the unique horror properties of the original movie, vacuum packing it as its own classic movie, rather than attempting to ape it and spoil the legacy.

It also served as a valuable buffer between Alien and Alien 3, a movie that did attempt to ape the original. Here, the argument that Aliens ruined a franchise truly fails to hold water, as we went from the high-octane action of Aliens to the slower-paced, marine-free horror of Ellen Ripley trapped on a prison planet. Clearly, Aliens failed to permanently alter the course of the series and force it to be about space marines blowing xenomorphs to bits, because the very next movie to appear was another horror movie with one lone monster in it. Now, it’s a popular belief that Alien 3 was a bad movie as well, but to discount it entirely from the argument is to provide an argument purely lacking in context.

I personally love Alien 3, but my opinion is not the popular one. Clearly, people had enjoyed Alien for what it did, and didn’t need another film to pull the exact same gags all over again. The fact that we celebrate Aliens for taking an established premise and doing something boldly different should provide a valuable lesson in how to produce a great sequel. A movie that retains the legacy of that which came before it, while doing its own thing, should be applauded. At least, it should if the thing it’s doing is good, and few of us could claim Aliens isn’t damn good at what it does.

I’d also say that accusing Aliens of being nothing but an excuse to show space marines blowing up xenomorphs is missing the point of the film entirely. The space marines are gung-ho, testosterone-addled, overtly macho stereotypes, this much is true. However, the entire point of their gun-toting, cigar-chomping overconfidence is to show exactly how meaningless it all is when they come face to face with a superior enemy. A big part of the movie is showcasing how all the swaggering masculinity in the world falls utterly apart when things truly go wrong, as evidenced when the marines first encounter the xenomorphs and lose half their number in a devastating defeat.

Yes, some xenomorphs get blown up, but the overall point of the battle between the marines and the xenos is that the space marines suck. They suck. They’ve got technology and firepower backing them up, and as soon as all their shiny toys and bullets fail them, they have absolutely nothing. They have less than an industrious little girl and a civilian woman with something real to fight for. That is the point of Aliens, that is why the space marines are characterized the way they are. They exist entirely to provide context to the further characterization of Ellen Ripley. To suggest they are meaningless stereotypes without acknowledging their role in the story is to miss what they’re there for.

I think we should also understand that, by establishing certain famous ideas to Alien canon, Aliens also helped us to dodge a fairly massive bullet. If you’ve ever read the original script to Alien, or indeed seen its deleted scenes, you’ll know that the original plan for the movie was to have the most contrived and ridiculous method of xenomorph reproduction ever – the xenomorph would incapacitate humans and then turn them into facehugger eggs. Yep! Ripley stumbles across the crew of the Nostromo toward the end of the film, and finds them in various stages of metamorphosis. While there’s a slight “body horror” element to the scene, it overall fails to hit the mark due to it looking and sounding completely silly. In giving us the Alien Queen, an oversized xenomorph that laid the facehugger eggs directly, Aliens gave us a less comedic explanation, and I dare say that her reveal in Aliens is exactly the kind of tense horror scene that Schuyler believes Aliens is bereft of. And let’s face it, if Alien had its way, we’d never have gotten that amazing Power Loader battle between Ripley and Her Highness. So. Worth. It.

Alien is a truly incredible horror movie. Aliens is a truly incredible action movie. I think neither movie exists at the expense of the other, and I do in fact believe that they owe each other a great debt. That both movies are so wildly different ensures that the pair of them stand alone as classics. You just don’t see that in other franchises, two movies that are so capable of standing on their own as masterpieces of their respective genres. I, for one, am thankful we have both movies in the world, two movies that prove you don’t have to recycle ideas to make a sequel, that the Alien universe is big enough for more than one premise, and that sometimes, it’s okay to be creative.

All of this chatter about Xenomorphs was dredged up by this week’s announcement of Alien: Isolation. Check out our preview here.