If you look at all our references, what we allude to in our films and our sitcom even… they’re almost exclusively American films. We grew up on a diet of American culture, which you just do if you’re from the UK. It’s this great resource – a country hundreds of times bigger than ours, but speaks our language.

As a creative unit, Simon Pegg and Nick Frost (and their frequent collaborator, director Edgar Wright) represent easily the most potent incursion by British comedy into American “geek culture” since the heyday of Monty Python. Though dedicated Anglophiles likely discovered their revitalized take on the otherwise-waning subgenre of pop-referential nerd/slacker comedy in the BBC sitcom Spaced, it was the epic comic love-letter to zombie movies Shaun of The Dead that blasted them into the cultural stratosphere.

A follow-up, the action spoof Hot Fuzz, brought more acclaim … and soon enough came penetration into the Hollywood blockbuster scene they’d admired and satirized – they both cameo’d in George Romero’s Land of The Dead, and Pegg landed the heavily-sought role of Scotty in JJ Abrams’ Star Trek reboot.

I think I called you Pom-Pom this morning?

You did call me Pom-Pom this morning.

Note: Shortly after this, Nick Frost trailed off into digression on how odd it is for them to actually say each other’s names, repeating variations on “Simon, Si-Mon, his name is Siiiiimooooon …”

Now they’re back again with Paul, a send-up/celebration of UFO mythology and it’s translation into the “Spielbergian” optimistic-scifi of the 80s, which casts the pair as geeky British tourists who meet a real-life alien (voiced by Seth Rogen) while visiting America for the San Diego Comic Con. I had the honor of joining them as part of a roundtable interview when their press-tour stopped in Boston – and yes, they are exactly as funny in person as you’d hope them to be. I’ve assembled some choice quotes from the session, for your reading pleasure…

Coming from England, films like Deliverance or Southern Comfort… you have this preconceived notion of what people will be like in the [American] interior… but they’re actually quite the opposite. Except that old lady who chased us with the pitchfork.

And those hillbillies who abused us.

As part of the production of Paul, Pegg and Frost embarked on an actual American road trip, to get a feel for the country itself and to (hopefully) inspire more humorous observations in the movie. During the interview, they repeatedly stress that the movie wouldn’t have worked without it.

We live in a country you can drive across in a day. This is a country where you can travel a day and not see another human being – that was awe-inspiring.

– Simon Pegg, on their American road-trip

Indeed, a sneaking sense of autobiographical intent is part of the film’s charm – much of its central joke is that the two shy, introverted Brits are much more “alien” to the American backroads than the actual alien … who’s been living in the States since the 50s and is actually responsible for much of the scifi pop-culture they grew up worshipping.

Everything we write is to make ourselves laugh. We learned very early on that there are other people who also laugh at what we find funny, so our first litmus test is us.

– Simon Pegg, on the writing process

We’d never do it, but sometimes we think it might be fun to actually make a big expensive film … but then only show it to our mates, y’know? 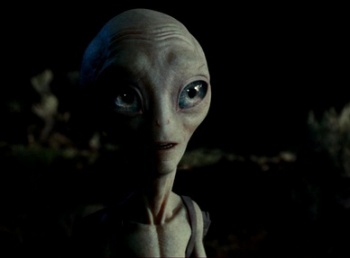 Interestingly, Paul marks the first major feature-length pairing for the duo not directed by their longtime pal, Scott Pilgrim helmer Edgar Wright. Instead, Greg Mottola of Superbad and Adventureland called the shots; an indicator of the film’s broadening of its frame of reference both outside of the UK and also outside the realm of pop-reference.

It goes to show we don’t just reference, you know, pop-culture and such… we’re not above also joking about millennial documentaries about child-abuse.

– Simon Pegg, on Paul‘s obscure reference to Capturing the Friedmans.

The film’s humor also heads into a realm that may be somewhat surprising to fans exclusively familiar with the broad genre-parody and slapstick of Shaun and Fuzz: potential controversy. Kristen Wiig plays Ruth, a “born-again” Creationist who finds her eyes opened by Paul – whose very existence she at first regards as blasphemous.

Early on we thought, wouldn’t it be interesting if someone came along for the journey whose entire worldview is rocked by the mere appearance of Paul? It didn’t so much come from the whole Darwinism vs. Creationism thing … it was more of, ‘what’s it like to see a human being literally born again … again?’

– Simon Pegg, on the creation of the character Ruth.

In addition to Wiig, they were also glad to get to work with a cast of American stars like Seth Rogen (the voice of Paul), Jason Bateman, Bill Hader and Joe Lo Truglio, the latter of whom play bumbling cops chasing the heroes cross-country as Paul tries to rendezvous with his Mothership. And yet; they don’t feel as though they’ve lost their “innocence” as dedicated genre-fans.

Just because you’re in a position to make films and hang out with Seth Rogen, doesn’t mean you don’t still get a weird feeling when you hear a TIE-Fighter screaming down the trench. It’s in you.

– Nick Frost, on being filmmakers and film fans

Seth has Benjamin Button’s voicebox, right? By the time he’s 80, he’ll have a child’s voice.

Along with the known cast, the film also features several surprising cameos from celebrities associated with some of the very films being spoofed. In a sly bit of meta-humor, at least two of the funnier ones – which I won’t spoil – are rather literally “phoned-in.”

Greg was so nervous; he forgot to call ‘Action!’

Some have suggested that Paul himself is a metaphor for our incursion into America and meeting our idols. Like … something wonderful steps out of the dark, and turns out to be just an ordinary guy. And yeah, time and again we’ve met our heroes and they turn out – in the most delightful way, to be down-to-Earth, ordinary folks who love their jobs.

– Simon Pegg, on meeting and working with filmmakers who inspired them