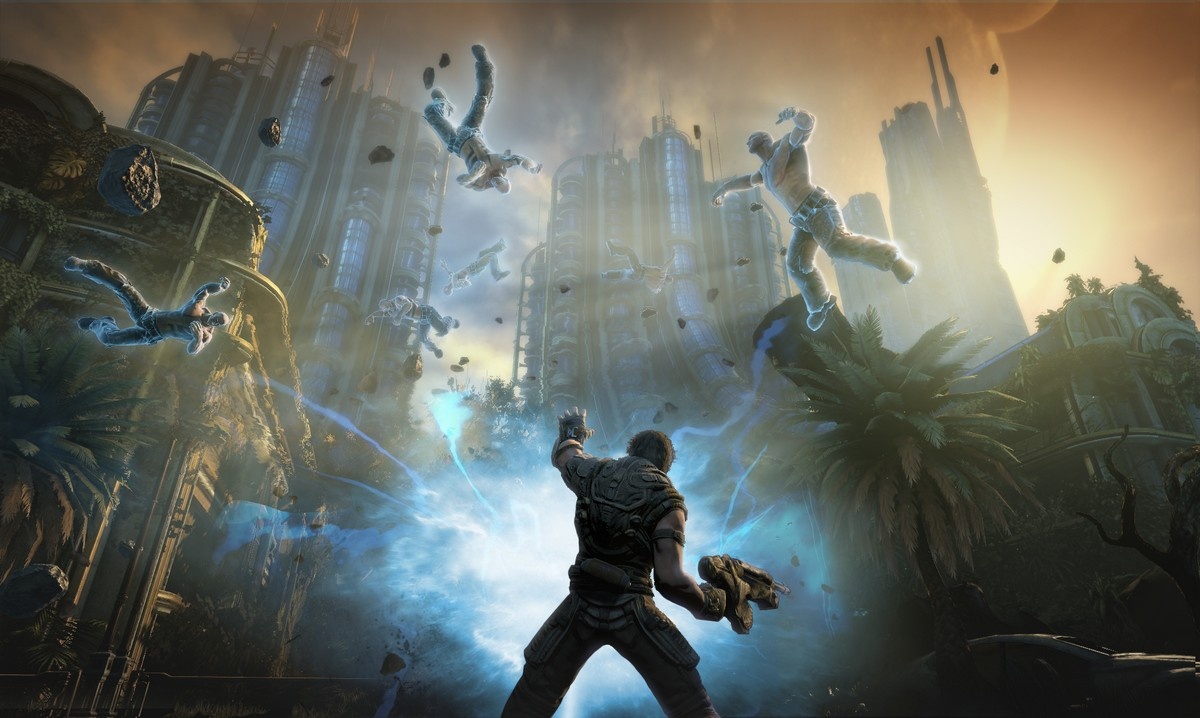 Put on your kicking boots, because we’ve got locations for every single Bulletstorm: Full Clip Edition collectible.

To make life easier, scroll through the gallery showing where to find both types — Electro Flies and Newsbots. Naturally, you’ll need to shoot up both types to “collect”, though the flying swarms of blue bots tend to be trickier to spot in the environment.

There are a total of 21 Electro Flies, and 28 Newsbots. For getting them all, you’ll earn the “Major Malfunction”, “Total Malfunction”, “Insecticide” and “Pest Control” achievements / trophies.

To collect, you’ll need to shoot down every single individual fly. NewsBots are easier, you can kick or shoot these annoying droids to “earn” them. For every Electro Fly / Newsbot you break, you’ll earn a small XP reward.

Electro Flies #1: Early in the chapter, enter the mansion courtyard with the pond. You’ll see them on the left as you hop over the root, near the drop kit in the pool.

Newsbot #1: The newsbots are happy little machines that spread news. Kick and destroy them to collect. The first one is scooting around near the canal, right past the swarm file.

Electro Flies #2: Moving past the automated disco dance hall, find the swarm to the left. They’re right over the cliff. Grab the collectible before taking the steps down.

Newsbot #2: Ahead, you’ll enter a courtyard where creeps armed with explosives will suicide-charge your team. Clear the enemies and smash the bot in the next interior room.

Electro Flies #3: Continuing through the villa, you’ll enter a stairwell with electricity wires hanging above. Go down and through the door to the exterior courtyard. The swarm is to the left of the building on the opposite side of the yard.

Newsbot #3: Later, you’ll enter a QTE climbing sequence using a vine to reach a new canal bath. On the boardwalk near the raised bridge, you’ll find the newsbot.

Electro Flies #4: In the same area as the newsbot and benches, there’s a swarm buzzing about, to the left of the drop kit.

Electro Flies #5: Before entering the Monster Dome, look to the right of the neon sign.

Newsbot #4: Leaving the cage storage and entering the lobby with the city backdrop, find the bot before you’ll need to kick open the gate and enter the Employee’s Only area.

Electro Flies #6: Leaving the cave, move to the first drop kit in the chapter. Look to the right of the kit, by the cracked dam in the distance.

Newsbot #5: Near the ledge of the seating area, to the right after completing the sniper sequence.

Newsbot #6: After Ishi repairs the bridge, you’ll use your leash to access a new area with a drop kit. Go through the narrow path to reach an interior with this bot.

Electro Flies #7: In the harbor area, clear the enemies until an exit door opens at the far end. Find the swarm at the last dock down the line.

Electro Flies #8: Once you reach the interior with a view of a waterfall, you’ll be able to find both collectible types – the swarm is just outside near the first waterfall you encounter.

Newsbot #7: The newsbot is whirling around the same room with a view of the waterfall. Find it after leaving the hologram hallway.

Electro Flies #9: After completing the first combat ambush, use the switch to lower the bridge. Check the right side of the bridge.

Newsbot #8: Once you meet up with Trishka in the foundry, continue upstairs and look for an open doorway to a balcony on the right.

Newsbot #9: Go down to the exterior bridge plaza. Before reaching the wheels, find the newsbot in this area.

Electro Flies #10: Continue beyond the burning debris, past the newsbot, and look to the left of the structure with the giant wheel behind it. Ahead, you’ll reach a hole you’ll need to dive down into.

Newsbot #10: At the freight elevator, you’ll encounter a fallen newsbot in the corner. Don’t miss it just because it isn’t zipping around.

Newsbot #11: In the ruined structure, use the leash to pull down a fan. After pulling it down, find the newsbot on the left.

Electro Flies #11: Look left once your team reaches the street level. The swarm is under a ruined awning entrance to an opulent building.

Newsbot #12: Found inside a medical tent next to a drop kit. Find it after clearing the road block with the giant orb-shaped sign.

Electro Flies #12: After Ishi is separated from Gray, continue through the exterior with the massive columns. The swarm is located on the right side, and they’re available before reaching the steps leading down.

Electro Flies #13: Continuing down into the garden and down the stairs, find the next swarm to the left of a drop kit.

Newsbot #13: Entering the area with the first appearance of the Venus Flytraps in the chapter, find the newsbot in the left corner.

Newsbot #14: Moving to the area with the cacti you can kick enemies into, find it near the drop kit. This is a good area to kick opponents into the bot and earn the “Killer News” killshot.

Newsbot #15: Later in the chapter, a giant mutant plant will destroy the enemy chopper, initiating a mini-boss fight. Kill the boss and take the steps up – move to the chopper crash site on the left, go up the stairs and find the toppled bot.

Electro Flies #14: This one is hard to miss. Moving up the path past the previous newsbot, follow the right path to an encounter with explosives. Shoot the explosives and the swarm will get destroyed too.

Electro Flies #15: In the greenhouse, find the swarm down a dead end path on the right as you move toward the last objective.

Electro Flies #16: At the hotel exterior, spot the swarm flying to the right of the “Cliffside Hotel” sign and entranceway.

Newsbot #16: Inside the hotel, reach the area where you’ll need to slide to progress. Before sliding down through the cramped passage, look to the left to find a bot through an open door.

Newsbot #17: Continue until Gray steps on some red doors. They’ll fling open, dropping you into a sideways hallway. The newsbot is straight ahead.

Newsbot #18: Right at the start of the act, you’ll find the bot straight ahead in the underground car park.

Newsbot #19: At the monorail station, run to the exterior front of the train. Look to the left and spy on the area – there’s an unreachable area across the tracks with the newsbot.

Electro Flies #17: In that same unreachable area, you can also spot the swarm of electro flies.

Newsbot #20: After encountering a new enemy type, you’ll enter an interior with the chapter’s only bot. Find it next to the drop kit.

Electro Flies #18: From the newsbot, hop over the counter on the right. Kick down the door to reach an optional room with the swarm collectible.

Newsbot #21: Leaving the underground, you’ll return to the surface. The newsbot is in a small seating area with a carpet.

Newsbot #22: Moving on after a mini-boss fight, enter a small building with a closed shutter door. Don’t miss the bot to the left of the switch.

Newsbot #23: In the interior hallways early in the chapter, you’ll run directly into the bot. Find it near one of the corner seating areas as you move down the stairs.

Newsbot #24: Taking the stairs down into an ornate dining hall, find this bot in the center of the room.

Newsbot #25: Fighting through the swarms of enemies, continue past the passage filled with explosive barrels and through a door to another room. The bot is on a walkway to the left.

Electro Flies #19: Ride the platform through the chamber filled with contaminated water. After the ride stops (and the cutscene ends) turn to shoot the swarm in the vat.

Newsbot #26: Impossible to miss. This bot is in the Deep Space Cafe. Smash it before kicking through the glass exit doors.

Electro Flies #20: After leaving the Deep Space Cafe area, look to the right to spot the first swarm.

Newsbot #27: When Gray splits the team, you’ll take the upper path while your allies fight below. In the seating area ahead, you’ll find a circular blue sign and two open doorways on the left. The swarm is though the second doorway.

Electro Flies #21: Once you defeat a gang of mini-bosses and enter the cargo hold, crawl through the vent. After kicking open the vent cover, turn left.

Newsbot #28: While running through the destroyed building, Trishka will comment that you need to make it before the enemy. On the way, look for a doorway on the right. The newsbot is either inside the open doorway or wandering around the wrecked platforms.