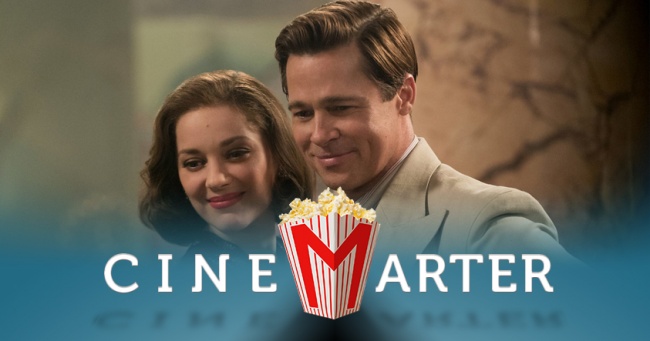 When not wasting his time with uncanny valley CGI movies, director Robert Zemeckis has quietly established himself as a top-tier Hollywood director. Think about it: Back to the Future, Who Framed Roger Rabbit, Forest Gump, Contact, Cast Away, Flight, The Walk – he’s got quite the resume under his belt. Allied, is his first live-action disappointment in a long time, showcasing talent both in front of and behind the camera, but never quite coming together as something compelling to watch.

The story is pretty basic, even if takes a long time to get to the hook. Set in the early 1940s, Max (Brad Pitt) is a spy who gets sent on a mission in Casablanca. He’s to team up with Marianne (Marion Cotillard), and they’re supposed to assassinate a German ambassador – masquerading as husband and wife until they get the chance. They fall in love for real, and after the job is done get married and have a kid. A year later, Max is told by his superiors that there is reasonable intelligence to suggest that Marianne is actually a German spy. Get your Mr. & Mrs. Smith jokes out of the way now. 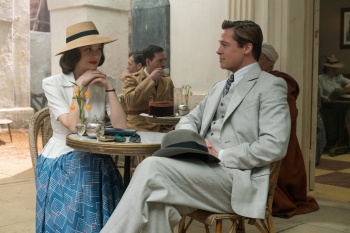 So, Max has 72 hours to wait before he’ll find out for sure. A better film would try to reap tension from everyday interactions, adding doubt to normal behaviors and making us question every inaction or action. Allied mostly keeps Max and Marianne away from each other after the suspicion is revealed, keeping Max busy with various tasks as he tries to find out – before anyone else can – whether or not his wife is the person she says she is.

Not only does this lack tension – Max just talks to a bunch of one-off characters, essentially killing time and feeling like filler – but it keeps the leads mostly apart, which doesn’t allow them to generate any sort of chemistry or any sense of a spark. That’s necessary to both make us care if Marianne’s a spy and to make the ending work instead of feeling like a cop-out – it’s a little bit pregnant. An emotional investment in the characters prevents us from caring, but because we don’t have a lot of that, our minds immediately drift to the more logical analysis.

Allied is a disappointment but not a terrible movie. It didn’t live up to its potential, and because of that feels worse than it actually is.

The Casablanca mission also takes far too long, making the movie take far too long to get to the crux of the film – the trailer did a better job condensing it while still delivering all of the pertinent information. And if that’s trimmed down, maybe we could get more of the married couple’s interactions. We would have time to dwell on Max trying to figure out Marianne with this new-found suspicion – instead of just going to a bunch of other characters to try to figure out her allegiance.

Still, it’s a slickly made movie if nothing else, and Allied is never outright boring, even if it is disappointing. It is, I suppose, a case of wanting one thing and being delivered something else. But even still, as a more low-key drama than out-and-out thriller, it still doesn’t really work, except to watch Max go on a quest to find out the truth about his wife. Maybe it doesn’t work because the stakes are so low – whether Max finds out early or not, the resolution is still going to be the same and be close in time to the point at which Max learns the truth.

Allied has a very strong cast, and that cast is one of the main reasons that it stays watchable throughout its running time. Brad Pitt is a solid lead, and Marion Cotillard is fine as the wife, although together they generate very little chemistry. They’re not given a ton of time to, either, but they probably get enough to work some magic. In supporting – but ultimately wasted – roles, you’ll find the likes of Jared Harris, Lizzy Caplan, and Matthew Goode. They’re good actors who are given almost nothing to do.

Allied is a disappointment but not a terrible movie. It didn’t live up to its potential, and because of that feels worse than it actually is. It’s an almost tension-free experience that doesn’t work as a drama, a romance, or a thriller – and yet, it remains watchable thanks to a steady director and the stars in front of the camera. The premise is solid, but wasted, and the cop-out ending isn’t likely to resonate thanks to a lack of emotional connection delivered by the rest of the movie, but it’s still somewhat entertaining, which is something of a miracle.

Bottom Line: A watchable but disappointing movie, Allied fails to live up to the potential of its premise.

Recommendation: This is a perfect late-afternoon cable watch – especially if you want to start winding down for the day early.