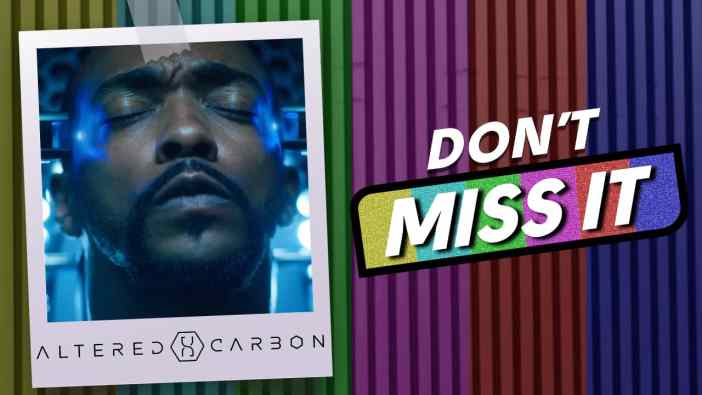 Altered Carbon has returned to Netflix for its second season.

The series launched in February 2018, adapted from Richard K. Morgan’s novel of the same name. Morgan’s novel is regarded as one of the modern classics of cyberpunk science fiction, winning the Philip K. Dick Award for Best Novel in 2003. The novel and series unfold in a future where mankind has harnessed “stack” technology to allow consciousness to survive the death of a body, offering functional immortality to those wealthy enough to afford it.

Altered Carbon is certainly a lavish production, as one might expect from a high-profile Netflix Original. The project was announced as part of a $5B investment in original content. As ever, Netflix has played coy with the actual numbers, but actor Joel Kinnaman insisted that it cost more “than the first three seasons of Game of Thrones.” Estimates suggest that each of the first season’s 10 episodes had a budget of between $6M and $7M each.

The show’s ambition matches its budget. Writing before the launch of the first season, Morgan asserted that “the long-term aim is to produce at least five seasons of the show.” This may be optimistic, given that the streaming service’s preferred length of three seasons per show would line up neatly with the three books in the core Takeshi Kovacs series. Still, there is some indication that Netflix is happy with the show for the moment, announcing a second season only five months after the release of the first.

Much like The Expanse, a television adaptation of Altered Carbon is the kind of project that has only become feasible in the era of streaming giants. It would be too risky a proposition for traditional broadcast television in terms of genre and content, and it would be unlikely to attract a large enough audience to justify its survival if Nielsen’s viewership estimates are to be trusted. Its budget would place a heavy strain on boutique cable providers like HBO or Showtime. Netflix was the only way forward.

In keeping with the cyberpunk aesthetic, the first season of Altered Carbon is structured as a noir-infused murder mystery playing off the show’s central concept. Takeshi Kovacs (Kinnaman) finds himself released from prison at the behest of wealthy philanthropist and entrepreneur Laurens Bancroft (James Purefoy) to investigate a locked-room murder. This mystery is complicated by the fact that Bancroft himself was the victim, his consciousness restored from a backup with no memory of what happened.

The first season of Altered Carbon uses this mystery as a spine to explore its world. The series is obviously inspired by a wealth of classic science fiction sources, from the original Blade Runner to the work of William Gibson, but the series is most interesting in its exploration of the nature of consciousness — what happens when a mind moves from body to body, and what are the implications of that? In a world where life is already cheap, what happens when death is removed from the equation?

Altered Carbon doesn’t always push its core ideas in the most interesting direction. There is occasionally a sense that the central “stack” technology is treated as an abstract thought experiment, rather than following it through to its most fundamental conclusions. Still, the series gets a lot of mileage out of the incongruities of the technology, most notably with the body of a simpleminded gangbanger (Matt Biedel) that alternately houses a Latinx grandmother and a local crime boss over the course of the series.

Still, Altered Carbon is a loving cyberpunk homage. It takes great pleasure in the cheesy hard-boiled dialogue associated with the genre. “If I were afraid, would you save me, Mr. Kovacs?” coos Miriam Bancroft (Kristin Lehman). Kovacs responds, “I’m not sure you need saving.” Kovacs allies with an artificial intelligence that styles itself after Edgar Allan Poe (Chris Conner) and even engages in a deathmatch in a “fightdrome” operated by the sadistic Carnage (Matt Frewer). Even the series’s delightfully lurid violence and (equal opportunity but still) gratuitous nudity feel like a loving tribute to the genre.

The second season of Altered Carbon offers something of a fresh start for the series. Kovacs has been “re-sleeved” — given a new body — which allows for the series to swap leads from Joel Kinnaman to Anthony Mackie. Whereas the first season operated in the style of a futurist film noir, the second season offers a much larger and more consciously epic story, with Kovacs embarking on a journey back to reconnect with his lost love (and rebel leader) Quellcrist Falconer (Renée Elise Goldsberry).

Altered Carbon doesn’t reinvent the wheel, but it doesn’t have to. At its core, the show is an affectionate celebration of the tropes and conventions of these sorts of pulpy science fiction adventures, with Netflix affording the series a scale with which few television series can compete. As befits its premise, it spins an old genre back up again for another go-round.

The first and second seasons of Altered Carbon are now streaming on Netflix.