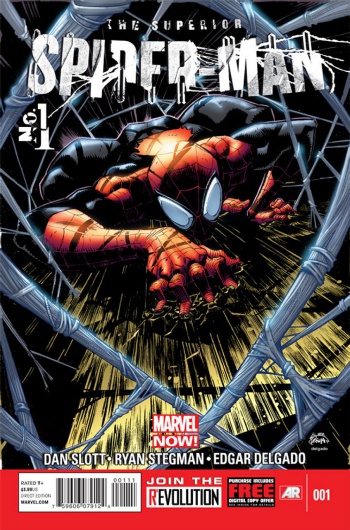 As part of their Marvel NOW! initiative, Marvel comics has published the final issue of Amazing Spider-Man, featuring the death of Peter Parker – Spider-Man is dead. Issue 700 culminates the story arc that began a hundred issues ago, when it was discovered that longtime spider-man foe Doctor Octopus had a terminal illness. A hundred issues later, Doctor Octopus has stolen Peter Parker’s body, leaving Peter in Doc Ock’s dying husk, and Doc Ock/Spider-Man defeats Peter in his own body.

It’s official, Doc Ock is the new spider-man. He’s going to have a new book next year, titled Superior Spider-Man.

“This is Moriarty in the head of Sherlock” said Dan Slott, the writer on Amazing Spider-Man. Slott says the interesting part is what comes now, because Doc Ock is going to realize what Peter Parker has been teaching folks all along – with great power comes great responsibility. Doctor Octopus is going to be getting a new lease on life, and because he’s saddled with Peter’s memories, he’s saddled with Peter’s conscience. “It’s also what the good part of our first year on [Superior Spider-Man] is about: Doc behaving in a manner he’s not accustomed to. We see a more sympathetic side of Doctor Octopus.”

The book’s ending has opened up a flood of criticism from fans, but Slott remains optimistic. “How do you get more Peter Parker than that? Now the readers think he’s a menace. That’s exciting. On a meta-level, that is Spider-Man.”