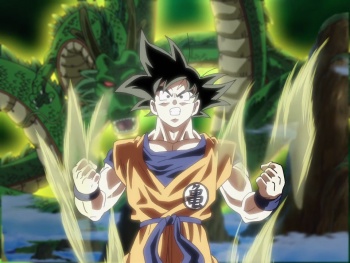 The first series, Dragon Ball, followed our hero Goku as he fought bad guys and gathered up the fabled Dragon Balls. Once together, they could summon a great dragon who would grant one wish. The next series, labeled with a “Z” to represent its ultimate nature, follows Goku as he discovers his origin as an alien originally sent to exterminate all life on earth.

Dragon Ball Z is a pure expression of everything that’s great about anime. It’s got everything: mystical martial arts … to sci-fi spaceships and teleportation … to normal people in modern clothes having comical adventures. Humor, tragedy, conflict, it’s all there. It’s also some of the worst anime has to offer, with storylines considered padded even by the sluggish standards of the genre, and nonsensical plot twists that make you wonder “did I miss something earlier?”

Celebrating 20 years of Dragon Ball history, the Kai series is a redux packaging. The original episodes have been digitally scanned and re-colored, and the colors are much more vibrant. The frame rate is greatly improved – where a six-frames-per-second sequence once looked cheap, a twelve-fps or 24-fps replacement has been dropped in. The English dub cast from the original Funimation run has come back and worked in new lines. And – most importantly – the original 291 episodes have been edited down to an even 100. Yes, that’s right: DBZ has been improved by trimming out two-thirds of the running time.

The main series has benefited from the reworking. A richer palette makes the natural landscapes wider; the characters stand out more. The original series used a xerographic process – pencils were photocopied onto clear cells, and then painted in from behind. The new digital re-workings are, for the most part, crisp and clear, but every now and then you can see computer artifacts, especially if you’re watching on a big screen TV. The shorter running time means fewer shots of people standing around with their mouths flapping, and more time watching people punch each other so hard, that they smash desert buttes into dust.

Akira Toriyama’s character designs are simple and fun, often with a dash of cleverness. (Of particular note is the Underworld, whose demons are a mix of Japanese mythology and modern bureaucracy.) Unusual among anime series (or rather, first among anime series to do it) is the main character Goku, whose unrelenting optimism, complete willingness for self-sacrifice, and cheerful attitude makes him a perfect hero and an excellent contrast to his foes who can never understand why he never gives up and is willing to fight for what’s right. He’s helped by Piccolo, a green-faced alien who has sworn to conquer Earth, but who often throws in with Goku and his crew when the threat to his target planet is so great that he needs to help. The contrast between Goku’s big-dumb-hero and Piccolo’s bitter-conqueror-also-ran characterization is a running theme.

Dragon Ball Z Kai is such a pure expression of young adult fantasy. Martial arts super-powers where people punch each other and shoot exploding balls of energy. DBZ Kai is especially awesome for what it does not do. There’s no ten-minute-long stretches of expository info-dumps as a character tries to explain some nonsense mythology building … and even better, no Stockholm syndrome where you sit through ten episodes before you delude yourself that it’s getting good “now that you understand what’s going on.” When main characters are named after condiments, or musical instruments, or kitchen appliances, you know you’re not supposed to take what’s going on too seriously – just watch and see what crazy thing they come up next, whether it’s monkey-grabbing, dinosaur-eating, or planet-destroying.

The bottom line: Dragon Ball Z is gonzo superhero action, with ray guns, fantastic devices, mutant powers, angry cavemen, and mysterious martial arts. You have to like any anime series that plays the death of a main character for laughs … and you have to love any show that makes the death into as a running gag.

Recommendation: The bestest anime evar just got even more bestest! Leaner, meaner, brighter, and cleaner, the new digital adaption kicks the crap out of all other anime, with its raw power of action, humor, and internet memes. Watch it and love it.

Funimation has the first 13 episodes of Dragon Ball Z Kai in one DVD box, which is like 40 episodes of DBZ awesomeness in a package one-third the size, so consult your doctor or physician before starting an anime regiment with this much concentrated awesomeness.

Norman Rafferty is a flamboyant martial artist and world-renowned hero, famous for defeating Cell all by himself and without any help from anybody else, a fact that is totally true.