My grandmother once told me that one of the greatest things about having kids is that you get to grow up all over again, and so far my experience accurately reflects that advice. While I work in an industry where it’s common to see thirty-year-old men and women wearing Batman t-shirts playing with Legos and arguing about cartoons, there’s something about playing with my kids that connects me more intimately with the joys of my own childhood than anything I do with my cynical friends and colleagues in the videogame industry. Part of it is the complete lack of pretense in my children’s imaginary worlds, where cowboys and dragons and rockets and superspies can exist side-by-side, unshackled by genre boundaries or “mature” expectations. The bigger part of it is helping the people I love most and whose happiness is my life’s goal to discover one of life’s purest joys. 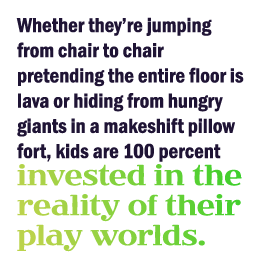 Apart from the emotional satisfaction in it, there’s a lot to be learned from watching children play. We may use the term “child’s play” to suggest something easy, but the truth is that real child’s play is a serious business. I don’t mean serious in terms of its ultimate consequences, but when you look at the commitment kids make to whatever imaginary dramas they’ve created, it’s clear they’re operating under the assumption of tremendous significance. Whether they’re jumping from chair to chair pretending the entire floor is lava or hiding from hungry giants in a makeshift pillow fort, kids are 100 percent invested in the reality of their play worlds.

A lot of people naturally assume that my kids are exposed to a lot of videogames but it’s not true. While I don’t actively discourage their interest in what they call “Daddy’s work,” I don’t go out of my way to make videogames a big part of their day-to-day life. My kids’ ability to fabricate elaborate scenarios entirely out of their heads makes the world of most videogames seem narrow in comparison. Of course, comparing horsey-back rides across the living room floor to something like John Marston’s exploits from atop his Kentucky Saddler in Red Dead Redemption isn’t easy. Each offers a different kind of freedom and depth, but like Red Dead or Assassin’s Creed, the make-believe worlds of a child’s imagination emphasize setting and character as much as (if not more than) pure mechanics.

When my son, who is five years old, latches on to a game, it’s inevitably because it has a form that appeals to him; the rules are a secondary consideration, if they’re even considered at all. If he gets to be Curious George or Lightning McQueen, that’s good enough for him. Games that have a context he’s less familiar with, say Lego Star Wars for instance, just aren’t as compelling for him because there are no real hooks on which to hang his invented narrative. And without that crucial component of identification, no amount of arresting gameplay seems to move him.

Let’s take one of his favorite games, Plants vs. Zombies, as an example. As a gamer, I see this game primarily as a challenge to be overcome and the form, while hilariously captivating, is merely the icing on the cake. Sure, I like the cute zombies and the funny plants, but those are just the vehicle for my fun. The ultimate destination is completing all the mini-games or growing my Tree of Wisdom as high as possible. 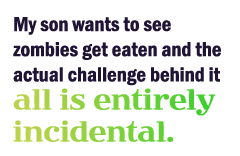 My son looks at it completely differently. For him, the game is about the form. He wants to see the zombies get eaten and the actual challenge behind it all is entirely incidental. He’ll watch me play, offering anxious advice and celebrating each and every victory. He’s even aware that there’s a greater goal behind this all; once a zombie starts getting close to the house, he gets the same urgent excitement I get, but unlike me he stakes no emotional value on losing to the game’s AI. When a zombie finally gets into our house, he turns to me with an amused expression as if to say, “Can you believe the bad luck we just had? I bet we can beat ’em next time!”

Things are much more interesting when he takes control of the game himself. Here, he’s clearly motivated more by aesthetics than by tactics. He won’t plant sunflowers, because to him they’re just not very interesting. They bounce around, and sometimes generate glowing balls. Boring. He’d rather just plant an entire garden of Chompers and watch as they devour wave after wave of shambling zombies. Or use a Jalapeno to clear a lane that only has one zombie in it. He almost always loses in the end, and sometimes quite spectacularly, but I can’t shake this feeling that he’s somehow found a hidden source of fun in the game, a fun that I can only experience vicariously.

The same experience-focused, fun-first approach applies just as easily to many of the other games he plays, from taking pictures of fish in Sea Life Safari to launching off the ski jump in Wii Fit. When I first introduced him to Sea Life Safari, which is a sort of underwater Pokemon Snap, all he wanted to do was toss out the glow sticks to startle the fish. I would tell him again and again, “The game isn’t about throwing sticks; you have to take pictures, too,” but the intensity on his face was a convincing argument against my score-oriented view of “the real game.”

As if to prove me wrong, he stares earnestly at the screen and throws out a few dozen more glow sticks, disturbing the various eels, crabs and dolphins he’s supposed to be photographing. In the face of such obvious enjoyment, my insistence that he define accomplishment according to my perspective seems kind of ridiculous and more than a little self-centered. Now that I’ve given up trying to make him enjoy these games on my terms, we have a lot more fun playing together. 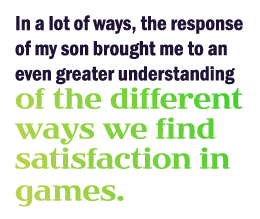 In a lot of ways, the responses of my son to games I thought I understood brought me to an even greater understanding of the different ways different gamers find satisfaction in games. I remember the weekend after I reviewed EA’s daringly mediocre Medal of Honor, and I was surprised to hear a good friend of mine, who also plays lots of shooters, call it an amazing game. He just couldn’t stop talking about how much fun he was having. Compared to my own opinion of the game – that it was, at best, courageously boring – he might as well have been describing an entirely different game.

When I first started reviewing games, this kind of contrary opinion would cause me to vacillate between dismissing them outright and obsessing over whether I was out of touch with the expectations of a particular genre’s fans. Now that I’m older, and have been doing this for a while, I accept that we all play games for different reasons. So when the opinions of a friend are wildly out of step with my own, my first question is whether or not we’re simply enjoying (or not enjoying) the game for different reasons.

If you like the modern military context of Medal of Honor or the space opera vibe of Star Wars: The Force Unleashed, you may not mind that the mechanics aren’t great. And if you’re captivated by the mechanics of games like Tetris or Hearts of Iron, you won’t care that those games don’t offer much in the way of visual spectacle. Believe it or not, there’s also a long list of games, from Dragon’s Lair to Crysis, where the sheer visual brilliance receives far more attention than the actual game design or story. Even this list displays my own biases, so spare me your attempts to argue that Force Unleashed had great gameplay, or that Crysis actually had a story.

In short, not only do we like different types of games, but we often like the same types of games for entirely different reasons. Nothing has taught me that nearly so clearly or thoroughly as watching my own son sit down to play his favorite games. Free from the restraints of the designer’s strategic goals or an understanding of the abstract value of points or unlocks, he just sits and plays. If you asked him why, he’d just simply say, “Because it’s fun.” For him, that’s as far as it needs to go.

We could all take a lesson.

Steve Butts is Managing Editor for The Escapist. He is still waiting for his kids to realize what a tremendous Lego collection they’ve inherited.