How should a man spend his retirement? Flying across the world? Scratching off a list of life-long goals? Or should he aim for something more ordinary, like taking up a computer card game? 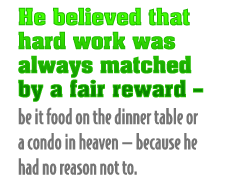 In 1995, the Metzgers and their closest friends gathered in the Gladieux Reception Hall of Toledo, Ohio to toast their patriarch, my grandfather, Norbert Metzger, on the end of his career in the printing business. There were hugs, finger foods, and questions about what the man of the hour would do next.

Until then, my grandfather had jogged through life in step with an unwritten agenda. Every morning for nearly 35 years, my grandfather rose from bed at 5:30, showered by 5:40, skipped breakfast (took too long), and drove to work in his American-made car, out the door by 5:55. Just outside Toledo, Norb managed his eponymous print company and its 7 employees, including his two youngest sons. In the evening, he caught a Cleveland Indians game or a police procedural (depending on the season), ate a potato-laden dinner prepared by my grandmother, and returned to bed – where, in 6 or so hours, he would wake and repeat the process.

The routine defined the man, and in that way Norb was the quintessential Ohioan. He worked hard at mastering one very specific thing, printing, and took on extra hours and duties to better provide for his dedicated wife, five kids, a couple of dogs, and the tithing bucket. He believed that hard work was always matched by a fair reward – be it food on the dinner table or a condo in heaven – because he had no reason not to.

The end of Norb’s career, that moment after the final acquaintance glad-handed him in Galdieux, clashed with his long held ethos. What was next?

At first, my grandfather did what any workaholic would do in the absence of work: He worked. He bought a pickup truck and made deliveries for the very company he’d left, playing an active role in the transition of ownership and responsibilities to his boys.

But that couldn’t last forever. He was a retired man. He should enjoy it, my envious relatives exclaimed over every Thanksgiving turkey and Easter ribs platter.

In February 2001 – five years into his “retirement” – my aunts and uncles spurred their parents to book a trip to The Villages senior living community in Florida. They were welcomed with fragile arms. The locals labeled Norb and his wife Pat “snowbirds,” a playful jab at that subset of northern retirees who only visit the rubbery, tropical oasis for relief from the winter months.

At some unknown point in the spring of 2001, however, my grandparents decided to make the vacation permanent. The house in Toledo was sold and the couple became residents of the Sunshine State by July of the same year. The snowbirds had nested.

With 1,050 miles and 18 hours of road between Norb and his former career, retirement was official. What would he do? He enjoyed early-bird meals with his wife, long walks in the sunshine together, and social engagements with new friends. But he found himself faced with a new reality of “alone time,” too, suddenly solitary. It’s no surprise what came next: He picked up a deck of cards, and played solitaire.

Norb and Pat were and still are notoriously bad with cell phones, so to create a direct line of communication between Florida and Ohio, my uncles purchased them their first computer: A Dell. “The guy who came and installed it asked me what I liked to do,” explained Norb to me in a conversation for this article. “And I told him I loved to play solitaire. And he said, ‘Then this is the easiest and best game.'”

That was the day my grandfather discovered FreeCell.

FreeCell and solitaire are, in fact, not the same, at least not in the way we laymen traditionally talk about card games. Solitaire is an all-encompassing term for any game in which cards, tiles, or pegs are laid out in set order and then organized. The specific game that most people call solitaire is actually Klondike.

No matter how good you are at Klondike, you won’t always win. FreeCell is always winnable. There are a number of differences between the two games, but this one is the most important.

It’s quite unusual that Klondike has become so popular, considering no amount of skill guarantees success. That, to me, would be like taking up bowling knowing that every few frames you’d be forced to forfeit a roll.

I’ve yet to find a study that provides a rock solid percentage of solvable deals in Klondike, but there are plethora of people in solitaire forums and college math programs who put the number as low as 63% and others as high as 92%.

In the original Windows FreeCell, all but one of the 32,000 deals have been solved. According to solitairelaboratory.com, only deal #11982 remains unsolved – its “winnability” is still up for debate. So, sure, FreeCell‘s not perfect, but close enough.

The sense of acquiring skill and, more importantly, winning hooked my grandfather. “I win once in a while,” he told me, “that’s what I like about it.”

Norb likes FreeCell a lot. Some might call him an addict – though I doubt he would. In the past two months, Norb’s played 1,200 games. His win record is 20 in a row; his loss record is 8. This is on his current solitaire. 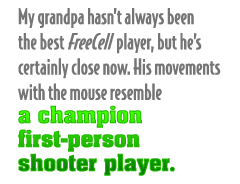 A few months ago, that old Dell hard drive gave up the ghost and a previous 36 consecutive win record was lost forever. My uncles furnished a new computer and with it came a new solitaire program and a new scoreboard.

“I wasn’t comfortable with it,” said Norb. “I did it. I didn’t win as often. The other [solitaire game] kind of baffled me.”

My cousin, a computer engineer, was ordered by the family to retrieve a copy of the original Windows FreeCell and install it on Grandpa’s Windows 7-powered computer. Norb needed his fix.

FreeCell is, at its core, a game about order. All the cards in a deck are dealt into 8 piles facing upward. The goal is to organize the deck by suit from Ace to King in the four foundation piles. One card can be stored at any time in the four cell piles and groups of cards can be moved to columns in which the bottom card aligns sequentially.

An expert player is an expert organizer. They know, far in advance, where things fit. The basic gist is like organizing a filing cabinet, managing a bank statement or storing hundreds of reams of paper in a printer’s warehouse.

For Norb and FreeCell, there have been good patches and bad, but hard work pays off more often than not. In a game like FreeCell, there is always a chance for success if you practice organizing everything, putting things in the right place, leaving room to adjust on the fly.

“When I started our [print] business, it was something I knew very well. I did it for 15,
16 years before I started my own business. And you need to have a complete knowledge
of what you’re going to do,” said Norb.

My grandpa hasn’t always been the best FreeCell player, but he’s certainly close now. His movements with the mouse resemble a champion first-person shooter player. I recently asked my cousin how he felt about having to find and install the original FreeCell for my grandfather. He thought the chore was funny at first, but after seeing my grandpa play, he understood.

“[Grandpa] said that Vista’s FreeCell was too slow and that he wanted the XP version back,” he told me. “So I had to copy the files over from a XP machine over to his Vista machine so he could continue to play the XP version. I had to do the same thing all over again when his hard drive crashed not too long ago. Before I switched the FreeCells I watched grandpa play the Vista version. He wasn’t joking. His mind is too fast for Windows Vista.” 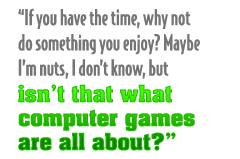 Norb’s retirement routine is less rigid than his work routine. He has time for breakfast and he loves to square dance with my grandmother, occasionally a couple times a day. He still watches the Cleveland Indians thanks to satellite television, which also provides no shortage of cop procedural re-runs. But what Norb does every day, like clockwork, is practice FreeCell. And it pays off; he’s only getting better. He’ll beat that 20 win record in no time.

After talking with my grandfather for this piece, I asked him if he thought it was excessive for someone his age or any age to play videogames for a couple hours a day.

“Because I do it, I would not,” he said. “But the other thing is if you have the time, what you do with your time is nobody else’s business. And if you have the time, why not do something you enjoy? To me, maybe I’m nuts, I don’t know, but isn’t that what computer games are all about? They’re about something you guys enjoy … I couldn’t go back to work now, because I don’t know anything about the company anymore. So what fun is going back and learning all over again after all these years? People say why don’t you read more. I don’t like to read. I don’t. So much of what I did I had to read. Well it’s a lot more fun to just play.”

Chris Plante is a New York-based pop culture writer who has written for publications including The Daily, Esquire, Popular Mechanics and IFC. Read more of his work at ctplante.com.