This week, a movie that will be winding up as the surprise entry on a lot of year end top ten lists opens in theaters. Interestingly, Man of Steel is nowhere to be found.

By all conventional cinematic wisdom, This Is The End not only shouldn’t work; it should be one of the worst, most un-watchable pieces of self-indulgent junk to crash onto screens since the last post-Zack & Miri Kevin Smith feature. A feature length, presumably improv-heavy, single location vanity project willed into existence so that members of the extended Friends of Judd Apatow can get paid to spend some quality bro-time? If anything sounds like a pass, this would be it.

And yet, it’s not. In fact, This Is The End is hilarious, infectiously watchable, and kind of brilliant. A comedy so well constructed and relentlessly funny that you’re virtually guaranteed to laugh even if the film’s central joke – famous people playing parody versions of themselves – is utterly lost on you. That’s an incredible accomplishment.

The premise? A small group of comedians and Hollywood actors are trapped together in an archetypal disaster survival scenario during what is gradually revealed to be the Biblical Apocalypse. The idea is amusing enough on its own, and then comes the aforementioned hook: The cast of famous (and not so famous) characters are playing themselves – or, rather, humorously exaggerated versions of their own best known public personas. The gag is two-tiered: It’s funny when these people act like we expect them to act, and it’s even funnier when they act against type.

A good comedy could’ve been made just by stopping there, but this one reaches for greatness by going to the next level and using familiarity to get the audience invested in what turns out to be a fairly compelling storyline. Jay Baruchel (as himself, like everybody else) has popped into Los Angeles for a visit with his old friend turned major comedy star Seth Rogen. Jay isn’t especially fond of the L.A. scene otherwise, so he’s annoyed when Seth decides to drag him out to a big Hollywood party at James Franco’s house. Also in attendance is world’s nicest human being Jonah Hill, obnoxious coke-fiend Michael Cera, boisterous Craig Robinson, above-it-all Emma Watson, jumpy Christopher Mintz-Plasse, horny Mindy Kaling, an uninvited – and extremely Kenny Powers-esque – Danny McBride, and more celebrities – as themselves, of course.

Watching Baruchel make his way through all this debauchery is compelling enough on its own (being the odd man out among a friend’s “other friends” is an endlessly awkward experience), and the gently exaggerated celebrity shenanigans are just grounded enough to be plausible (Rhianna knocks out Michael Cera for copping a feel), but then everything goes to hell. Literally. A seemingly planet-wide earthquake tears a Hellmouth open on Franco’s front lawn, thousands of people are zapped into the sky by bolts of blue light and most of the partygoers meet violent deaths. Eventually only Baruchel, Franco, Rogen, Hill, Robinson and McBride are left, barricaded inside Franco’s house trying to work out a survival strategy with what they readily admit are the extremely limited skillsets of Hollywood comics. 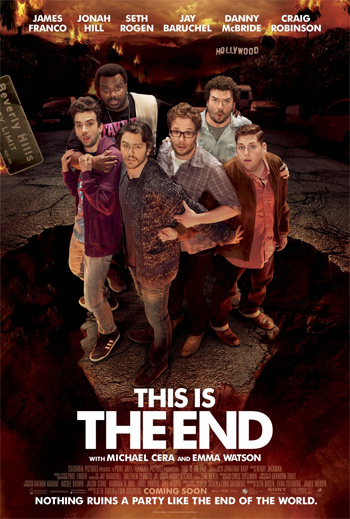 The key to holding all of this nonsense together is that it’s consistently willing to take the next logical step forward. These guys are all funny together, but what if they were playing the worst possible versions of themselves? It’s funny that they’re stuck in a house, but what if it was a disaster movie? Disaster movie is funny, but what if it was the actual Apocalypse and they had rampaging demons, hellfire and a possession to contend with? And then it goes and plays most of the survival/claustrophobia stuff remarkably straight: This is no parody, it’s a “realistic” Apocalypse survival movie that happens to be dwelling on a collection of comedy actors.

The only real question mark hanging over this one is whether or not it will suffer upon repeat viewings. A lot of the humor comes from the sense of constant upheaval: “I can’t believe they just did that!”, “I can’t believe ______ just showed up!”, “I can’t believe that just happened!” Such things are likely to lose some of their impact once you know they’re coming. On the other hand, a substantial amount of the remaining humor comes from clever character interplay and even genuine pathos. It’s hard not to sympathize with Baruchel’s dilemma at realizing that he and Seth are on diverging life paths, and Robinson invests his make-believe bravado with an undercurrent of authentic-feeling insecurity.

But, again, the real draw is just how screamingly funny the whole thing turns out to be. Not every joke is going to hit everybody’s funny-bone, especially when it comes to self-referential meta-humor like Franco brandishing a pistol from Flyboys or he, Rogen and McBride shooting a homemade sequel to Pineapple Express. But the gags come so fast and from so many angles that I can’t imagine anyone sitting there stone faced the entire time.

This Is The End is a singularly odd duck of a film. It’s a vanity project based on the participants mercilessly dressing themselves and each other down. But it’s a riot, and in a Summer of sequels, remakes and predictable genre offerings it’s a welcome distraction. It’s likely to be buried under the presumed juggernaut of Man of Steel this week, but if it runs near you I’d call it something like a can’t miss event in its own right.