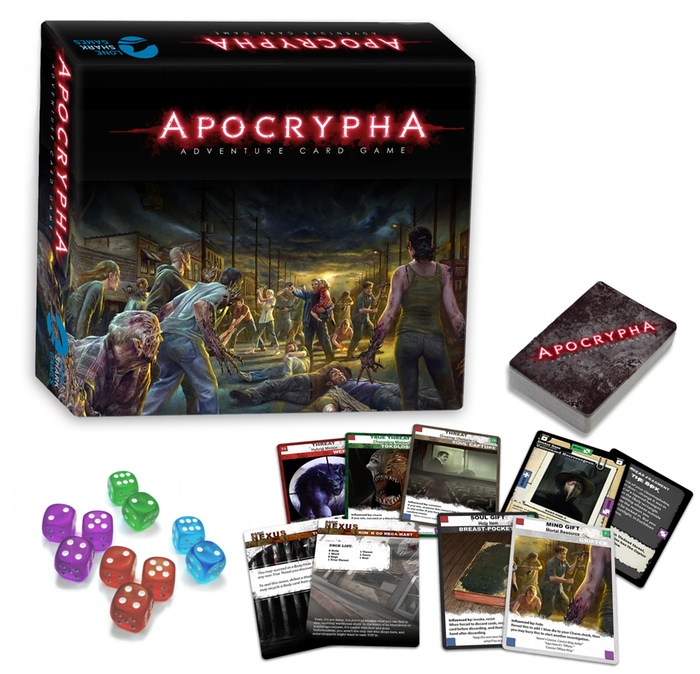 Lone Shark Games has launched a crowdfunding campaign for their new Apocrypha Adventure Card Game, focused on characters obsessed with preventing an oncoming invisible apocalypse. A combination of roleplaying game, card game, and deckbuilder, Apocrypha is much like lead designer Mike Selinker‘s earlier work on Pathfinder Adventure Card Game. Over the course of as much as a year of play, players will build up a persistent character and gain rewards for completing storylines and defeating ever more powerful evils. The game will be playable in both cooperative format, where the game runs itself against the players, and roleplaying format where the enemies are run by a gamemaster. Characters in the game are “saints,” people with the ability to see the monsters that others cannot. As saints become more powerful, they also become more emotionally unstable by unlocking repressed memories, a mechanic designed so that starting characters have a place in the game alongside experienced ones. The game is currently fully funded on Kickstarter with about two weeks to go until it closes. The current playtest rules for the game are also available.

The Escapist spoke with Mike Selinker over email to ask about what he and the team at Lone Shark have gotten up to while designing Apocrypha. I first asked him what he was doing to get the game done, and how close the rules were to being actually finished. “We’re getting there on the base rules and cards. But we’re unlocking new chapters at a frenetic clip, and those have to be written and illustrated. And then playtest, playtest, playtest. But we wouldn’t have released it to Kickstarter if we didn’t know we were close.”

Combining the game styles of games as diverse as Pathfinder Adventure Card Game and Betrayal at House on the Hill didn’t seem as neat as the Kickstarter made out, so I asked Selinker about it. “We don’t have PACG without Betrayal,” he said. “There’s a key element in the DNA of the game that comes straight out of Betrayal: The non-cooperative cooperative game. One of the things I pushed heavily into Betrayal was the sense that even if you were all working together, sometimes you want to end up with the things that the other player needs because you can’t completely trust what they will become. So here, characters change and get more unstable. Do you want the Holy Rocket Launcher in the hands of the stablest person or the least stable one? What does the least stable person think?” 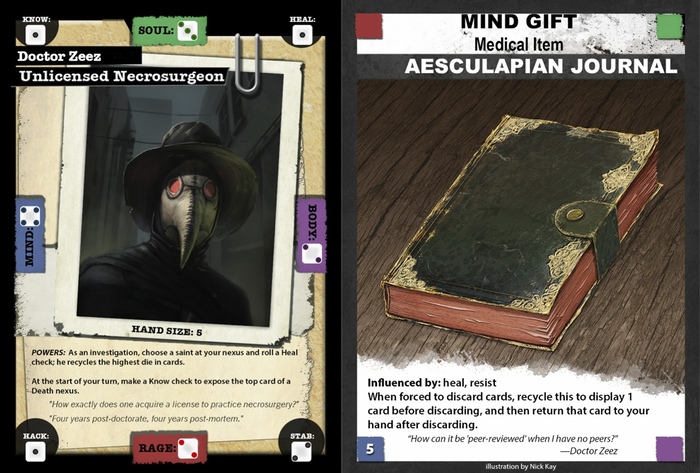 The game is balanced for up to six players, plus an optional seventh game master, and can switch between each game mode between sessions for any given length of play. “There are at least 90 missions in the game, all very different from each other. You can play however many missions you want, in whatever order you want, however many times you want,” said Selinker. Overall, he mentioned, a campaign can easily last for a year and show considerable variation. “That’s where having a gamemaster comes in. The game is pretty malevolent on its own, but if a player steps into the role of gamemaster then all the awful things the game can throw at you will come at you at the discretion of someone who said they were your friend.” An example of this, he said, was that a Werewolf monster might have four random mutations in a normal game, but in the gamemaster’s version of the world, it might be a “carefully constructed, Bulletproof, Invisible, Freakishly Huge Werewolf With Friends.”

Overall, if Apocrypha is of the same quality we’ve seen from Lone Shark’s work with Paizo on the Pathfinder card games, then the gaming world is in for a treat. Color us optimistic on this one.

Apocrypha Adventure Card Game is on Kickstarter until May 13th.