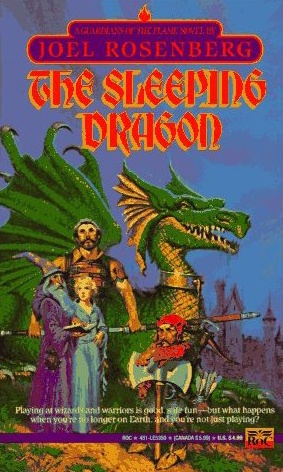 Influential fantasy and mystery writer Joel Rosenberg is currently embroiled in a labyrinthine legal battle versus the City of Minneapolis, stemming from an alleged felony weapons possession charge. His supporters and fans have established a defense fund and are seeking donations.

As an author of fantasy and mystery novels, one wonders if Joel Rosenberg doesn’t feel as if he’s been sucked into the plot of one of his own works – if his truth is now stranger than his fiction. The Guardians of the Flame series, the work for which Rosenberg is most well-known, tells the story of a group of college-age role-playing gamers who get magically transported into the world of their game, and realizing they’ve been given an opportunity to be a part of something larger than themselves, decide to stay. They devote their lives to fighting injustice and freeing their fantasy world’s enslaved inhabitants, just like their characters had been doing.

The novels are engaging not only in how they present a rich, immersive fantasy world, but in how subtly and masterfully Rosenberg uses the plight of these otherworlders to unvarnish some of the ugly truths about our own society. As with some of the best art, Guardians of the Flame is as much social commentary as it is entertainment. In his books, you can see the first stirrings of nationalism and pride that would later drive the author to take on the mantle of advocate and fight for the very freedoms he believes make our own world most worth fighting for.

Rosenberg was arrested in December in Minneapolis on the accusation of illegal possession of a firearm, among other charges. The arrest came over a month after Rosenberg was accosted by police for carrying a firearm on the premises of the Minneapolis City Hall, which they claim is illegal.

The problem: According to Rosenberg, it isn’t illegal to carry a firearm at the Minneapolis City Hall. And he should know; in addition to being a fiction author, he’s also the author of a number of non-fiction books, one of which is entitled Everything You Need to Know About (Legally) Carrying a Handgun in Minnesota. He’s also a 2nd Amendment Rights Advocate and a personal firearm safety instructor in his spare time.

While the facts are still being sorted on this one, Rosenberg and many of his supporters attest that, in addition to holding a permit for the possession and carrying of his gun, he specifically informed the county Sheriff’s office that he would be carrying it, the critical step many say grants him the right to carry just about anywhere, including City Hall. And Rosenberg isn’t the only one coming out against the Minneapolis Police Department on this one. His attorney, David Gross, is the man who helped co-write the firearm law police allege Rosenberg broke. If there’s a lawyer alive that can get his case dismissed, it’s probably Gross.

What makes this case particularly confusing is that Rosenberg wasn’t arrested on the day he walked into City Hall toting a gun. On that day, he was confronted by a police officer who asked him to remove the weapon from the premises. Rosenberg, believing he was well within his rights, attempted to debate the officer, but the officer wasn’t having it. He persisted in asking Rosenberg to disarm and after Rosenberg complied, the officer went about his business, seemingly unaffected and unbothered by the event, as this video, captured by Rosenberg, confirms.

If you’re thinking that anyone walking into a situation as potentially sticky as carrying a firearm into City Hall with a hidden camera to meet with a Police Officer is probably expecting trouble, then you’re right. Rosenberg was at City Hall to retrieve the police files on his wife, which he had obtained permission to receive only after a contentious Freedom of Information Act request. Felicia Herman, Rosenberg’s wife, had previously been arrested on false charges, which were eventually dismissed, but not before she had spent a month away from her family. Joel had initially been informed that he would need to pay the Police Department in order to receive her case files, which is not true and is against the law. After he argued the point, the department relented, which is when he took his fateful trip to City Hall.

Even stranger is the fact that Joel was arrested on December 8th, over a month after walking into City Hall with his gun and only after he posted YouTube videos ridiculing Minneapolis Police about the incident. His arrest warrant apparently mentions his videos, although making them and publishing them is no more illegal than his possession of a firearm. According to Minnesota law, only one person in a recorded conversation needs to be aware that the conversation is being recorded, and that person was Joel. All of which makes one wonder if it isn’t his Second Amendment rights Joel is now fighting for, but rather his First, the right to free speech.

Friends and supporters fronted his bail, and, for now, he is out of jail, at home and resting, but he suffers from multiple serious medical ailments and since losing his day job, faces the threat of losing his health insurance, in addition to the felony charges. Charges which, according to some (including at least one attorney, are aimed at forcing him into a plea before he can damage the Police Department’s credibility any further.

Having left the fantasy setting of Guardians of the Flame behind in 2003, Rosenberg has most recently been the author of mystery novels, and he jokes that in his new-found “copious free time” since being fired this week from his technical writing job, he will resume work on another novel. But it’s hard to believe that with so much at stake his mind will be occupied with little else but the fight for his freedom. If convicted of the charges against him, Joel could be facing years in prison.

Joel’s supporters have established a website, freejoel.com, chronicling the events in his case as they unfold. They are also seeking donations. Joel himself is currently under instructions from his attorney to not speak with the press, and was not able to comment on this story. More on this as it develops.

Russ Pitts is the Editor-in-Chief of The Escapist, a long-time fan of Joel Rosengberg’s work and a member of the NRA.

Update: We had previously, inaccurately reported that Ms. Herman had been in jail following her arrest.