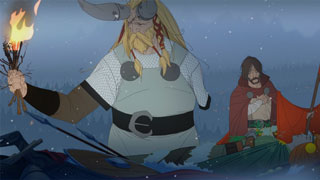 A new survival mode for Banner Saga 2 has released, and it’s free to those who own the game.

If you own Banner Saga 2, your game just got a little bit better. Stoic has released a new Survival Mode that adds to their Viking game.

In Survival Mode, you’ll be tasked with building a team out of a group of existing heroes, and then taking them into combat. They’ll have to survive 40 back-to-back rounds of turn-based combat. If one of your heroes is killed, they’re gone for good. That said, every time you win a round, you’ll earn an in-game currency called Renown that you can use to add new heroes to your roster. Items will drop during combat as well, and you won’t have to worry about matches bogging down thanks to the 30-second timer.

Stoic says they’ve been working on Survival Mode for a while now. Technical Director John Watson said in a press release, “This is an entirely new experience within Banner Saga 2. Our goal was to create a fun, tactical game mode where fans can play from a different perspective which focuses on strategy and the hard cost of death in combat. We modified how the combat worked from the core game based on feedback from our community and put it through a closed beta to make sure that it was fun.”

Banner Saga 2 has been available on PC and Mac since April 19, but if you’re an PS4 or Xbox One owner, you’ll have to wait until July 26 for the game to release. The good news is that Survival Mode is coming free with every version of the game, no matter when you buy it.