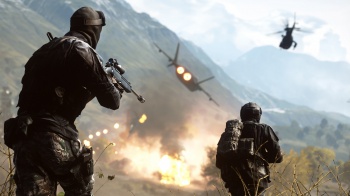 Battlefield 4 attempts, to varying degrees of success, to mix and match all the best aspects from the decade-spanning series. In some places this is brilliant, bringing new gameplay elements together in the moment-to-moment action of Battlefield‘s multiplayer. The tagline “Only in Battlefield” couldn’t be more apt, and Battlefield 4 is sure to spawn increasingly more chaotic tales of “That time when I sniped out a helicopter pilot and jumped in the falling chopper midair and flew off.”. There is however a two-steps-forward-one-step-back problem plaguing this iteration. While DICE keeps delivering the best multiplayer shooter around, crafting an interesting and impactful single player experience is still a problem. It’s time for them to put a bullet into single player and return to the series’ roots of not having a campaign.

Granted, it’s not quite the misfire that Battlefield 3‘s campaign was – there are a few moments of greatness peppered throughout Battlefield 4‘s 5 hour campaign. When it remembers it’s a Battlefield game is when the single player campaign is truly at its best. There are a handful of sections where the map opens up from tightly scripted hallway shooter to big areas with patrolling enemy troops and vehicles, and how you get passed them is left up to you to decide. Maybe you lay down some mines and try to lure the tank over them. Or perhaps you can sneak around, knife a soldier and take his turret to make short work of the rest of his squad. These sections of freedom, and the absence of rat-killing QTEs, are at least proof that there’s been some improvement from Battlefield 3.

Ultimately though Battlefield 4‘s campaign suffers from many of the same problems as its predecessor. Sgt. Recker, the player character, might not be as slavishly dependent on his squad mates to open doors this time around, but he does suffer from a classic video game protagonist problem in that buildings and vehicles near him become increasingly less structurally sound. The first time you fall out of a building as it’s crashing down around you, it’s exciting. When it happens again in a cable car, a bridge and more, it’s getting much too routine. These incidents are not in themselves bad, but the action of Battlefield 4 sits at this uncomfortable middle-ground. There’s a fun eye roll to be had at the spectacle and cacophony when it’s dialed up to 11, but it has to be fully committed to and Battlefield 4 stays too grounded otherwise to pull it off.

It doesn’t help matters that the story and characters are all so one-note and forgettable. China and Russia are up to no good again and it’s up to Tombstone squad to put things right. You still spend so little time with these characters that it’s hard to care or relate to them. Battlefield 4, like 3, tries to have these emotionally gut-wrenching sequences of choice and sacrifice, but they continue to feel hollow and flat at best, and manipulative at worst. It’s hard for these events to have much of an impact when you’ve only just met the person. Character death can be a powerful motivator when handled correctly, and it doesn’t require a ton of backstory but it does need some kind of connection in order to resonate.

Further mudding the singleplayer waters is the bafflingly incompetent AI. Often if you’re out ahead in the map further than the game expected you’ll see the pack of enemies spawn and run to their designated covers, completely ignoring the grenades and bullets you send at them. On the flip side, they will smartly retreat in some instances, but generally at inopportune times; breaking cover to run exposing their back to your fire. It is a little silly for them to go running just to get shot in the back, but at least it breaks up the monotony of some shoot-outs as you wait for enough of them to poke their heads up so you can move on to the next section. Your squad mates are not much better, for instance firing away at long distances with a short range SMG, but there are some light tactical elements in being able to tell your squad to focus fire on enemies in a specific area. This would have worked a little better if most of the game wasn’t a shooting gallery and you needed them to hold down a separate area for you, but it still lets you get your flank on while they are pinned in cover. 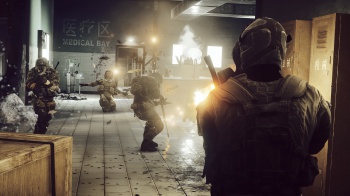 Multiplayer however is a whole other game practically, and it’s honest what most folks will be buying the game for. Battlefield 4 is without a doubt the best large scale multiplayer shooter experience around. For the current gen consoles, 24 other players, which works on some maps and modes, but it does sometimes feel a little anemic and lonely compared to the chaos that is 64 on the PC and next gen consoles.

Battlefield is at its best on big open maps, with just enough structures and cover so that infantry don’t get murdered by tanks and helicopters all the time, and most of Battlefield 4‘s better maps adhere to this formula. The best of the maps use a cunning mixture of indoor and outdoor sections with some stunning verticality as well. You can have frantic point-blank firefights while jets zip around outside, until a tank busts through the wall. There’s also a well-needed increased emphasis on combat on the water, rather than it just being an obstacle to get to the ground combat. New attack boats can quickly bring a lot of firepower to an area, and many of the control points are conveniently close enough to be captured while still on the water.

Map destruction is on full display in Battlefield 4, whether it’s simply blowing a hole in the wall with a grenade launcher to kill someone on the other side or engaging the map’s “Levolution”. The Levolutions are events that can be triggered on the map that have major effects on the landscape, though there’s also a increased number of smaller interactions – like raising barriers to block off vehicles or metal detectors warning you of enemies passing through them The Levolutions range from gimmicky and forced to having some actually significant impact on the map, like on the Siege of Shanghai map. More important than the spectacle of dropping a whole skyscraper after the first few times you see it is the effect it has on the control point. Once the defenders dig in on top of the tower, it’s pretty hard to wrest control away when you only have helicopters and elevators to get up there. So collapsing the tower, or likewise defending it from being knocked down, becomes an interesting angle to that map and your strategy.

Managing your team’s strategy, and returning from Battlefield 2 and Battlefield 2142, is the commander role. Each team can have one player taking themselves out of the fight in order to get a bigger picture of the action. The commander will need to allocate supply drops and radar sweeps to assist squads defending objectives while also helping to assault another control point with missile attacks or sending a gunship to loiter overhead that team mates can spawn into, bringing its heavy firepower to online. When it all comes together it’s an incredibly enjoyable experience, and getting hooked in with a good squad on a good team will make you want to sit there for hours on end.

The core gameplay is otherwise intact with a few new, or retreaded, modifications to enhance it. Battlefield 4 retains much of the heavy customization that was found in Battlefield 3. Your weapons can be finely tuned with modifications and sights to suit your particular play style. The developers have also moved towards defining the classes more by the gadgets they can carry into combat and less so by their primary weapon. DMRs, carbines and other unlocked weapon classes can be fitted to give a soldier a hybrid or middle ground feel. If you’d like your Recon to be more of a scout than a sniper, you can modify your loadout.

Further refining your customization and reinforcing squad-based tactics are the field upgrades. Field upgrades are an unlocked path of perks that raises and lowers during gameplay based on how your squad is playing together. Reviving your squad mates and accomplishing objectives together will unlock little advantages for you based on your selection – combat medics heal better, offensive characters run faster, etc. You can however lose your progress through actions like the whole squad being wiped out. The whole system gives a subtle edge to the team that’s working together better, incentivizing squads instead of solo lone-wolf, without throwing the balance off too far.

There have been a few out-of-the-gate issues with XP bonuses not applying, crashing and server browsing, but most of these have been addressed or Dice is at least aware of the problem. The only other time the multiplayer really runs into problems is the occasional mismatches between the various game types and maps. For instance, playing Infantry Only on a map that has you spawning out on the ship turns the first defense point into shooting fish in the barrel for defenders as you have no vehicles to safely transport your over and Obliteration, a tug of war based mode that involves moving a single bomb to enemy control points, is a real drag to play on a specific map that can be flooded, all but forcing the act of moving the bomb forward into a stand still.

Battlefield 4 is certainly grand. The scale and freedom in the gameplay makes for some truly unique and unscripted moments. Whether it’s parachuting out of helicopter to knife a sniper, crashing a tank through a barricade only to have you run up and blow it sky high with C4 or ramming your boat onto the beach and squashing some poor dude in the process, each little moment is pure grin-inducing fun.

Bottom line: As Battlefield 4 takes over carrying the flag for its franchise it comes with much the same baggage as the last iteration. The multiplayer is as amazing as it’s ever been, but it continues to be saddled with a sore excuse for a campaign.

Recommendation: The chaos, spectacle and customization all mixed together make Battlefield 4 the best multiplayer shooter out right now. “Only in Battlefield” couldn’t be more apt.