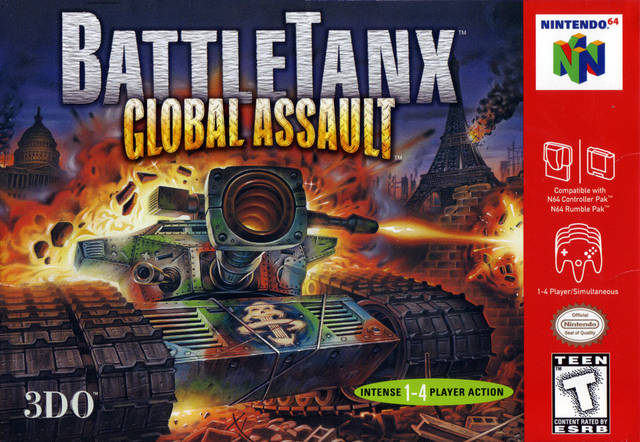 The tanktasticness continues with BattleTanx: Global Assault. Picking up where BattleTanx left off, it takes the strong foundation of the first game and builds on it with more powerups, more missions and, best of all, more tanks!

I didn’t like BattleTanx: Global Assault as much as I did the original, and that goes for both the Nintendo 64 version and the PlayStation version. It’s funny because there are more than a few tangible ways that it improves on the original (in the case of the N64 game any ways). When I look at the two games, however, I just can’t get over how much more charming I find the original.

It might sound silly but there was something about it that grabbed me. The music, the story, the visuals; while I certainly pulled no punches describing the inherent silliness of it all, it possessed a level of sincerity that made the experience work. Global Assault doesn’t pull off the same vibe quite as well. A big part of this is that its protagonist, Griffin Spade, is a lot less likable this time around. In the first game, he was pretty much a blank slate. There wasn’t much to him besides his quest. He was your basic stand-in for the player with the majority of his story being told by a detached narrator. Global Assault, comparatively, makes him into more of a person with a direct hand in dialogue, much to the game’s detriment.

I’m not saying that Griffin is a terrible character. It’s just that he works better as a concept; an everyman suit for the player to slide in and out of. Giving him poorly written dialogue (“My name is Griffin Spade. Battlelord. Maybe you’ve heard of me.”) does nothing besides adding a cringe factor to an experience that was already walking a fine line of credibility before. To be fair, I also didn’t like the game’s psychic powers plot overall, but it certainly didn’t help that the writing generally stepped away from the tone I enjoyed so much in the original.

There are, additionally, little touches that the game gets wrong. Some of them are, admittedly, very minor. It bothered me, for instance, how you couldn’t crush cars anymore. In the original, you could run over cars with your tank and flatten them into little metal pancakes. In the sequel, hitting a car yields a standard, boring explosion and that’s it. Global Assault‘s music is also very much inferior to the first game’s soundtrack. The music in BattleTanx made hitting the on switch feel bad-ass. Global Assault plays out to what I can only describe as the quintessential generic rock soundtrack; utterly forgettable in every way. 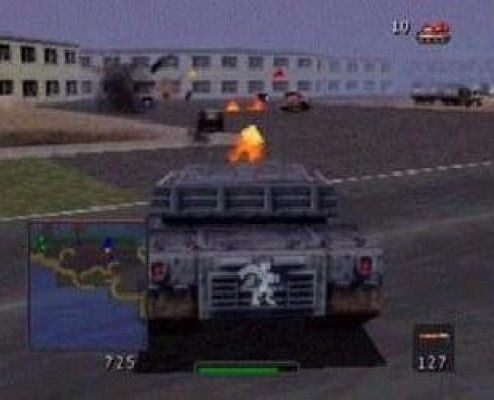 The thing is, not a single one of these problems is enough to quell the fact that the sequel’s gameplay is a vast improvement over BattleTanx. Some of the changes made are relatively small. The turret on your tank, for instance, can now be turned from side to side whereas it was stationary in the original. Others alterations, meanwhile, are game-changing. The Tank Bucks system, for example, provides a depth to the combat that simply wasn’t there before. Rather than just starting each level in the M1-Abrams, you instead have Tank Bucks you can spend to equip yourself with different models of tanks, of which there are now nearly a dozen (BattleTanx had three).

These options, in turn, provide some genuine strategic variety that was sorely missing from the original. For instance, in one early level, I kept trying to fight my way through with the Abrams. The thing is, the Abrams is a tad on the cumbersome side and this level was filled with hidden turrets that I couldn’t see until they were already blowing me into oblivion. Running low on Tank Bucks thanks to frequent deaths, I tried switching to the lighter (and cheaper) Mototank. Low and behold, I was suddenly able to zip past all that pesky firepower and beat the level using hit-and-run tactics that the Abrams wasn’t equipped for.

These new strategic options come in especially handy thanks to the fact that even the earliest levels are generally more challenging than anything from the first game. For context, I was able to breeze through BattleTanx in a few hours. In Global Assault, I spent that same amount of time fighting through the first handful of missions. It isn’t just a matter of tougher enemies either. While the AI did seem a bit better at hitting my flanks and sneaking up on me, the bigger culprit for the game’s increased challenge was the fact that it varies up its objectives more than the original. 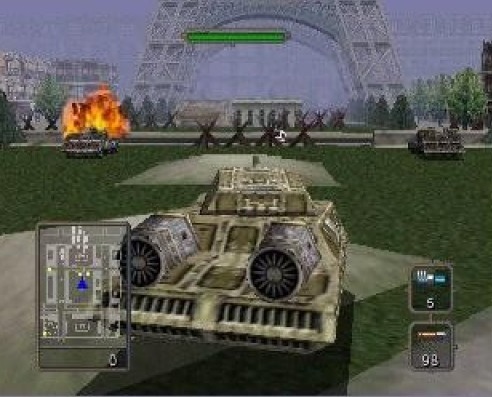 On the one hand, I suppose there’s not very much difference between fighting your way into an enemy compound to capture a queen lord and fighting your way into an enemy drive-in theater to destroy a projector. That said, the game does a great job of staging these objectives so that they take actual work to accomplish. It brought a smile to my face, for instance, when I realized the aforementioned drive-in projectors could only be destroyed with the otherwise useless grenades. Beyond that, new mission objectives like escort missions and prisoner rescues added a bit of spice to an experience that otherwise could have been another exercise in mindless destruction. The end result is a campaign that’s almost twice the length of its predecessor’s and that manages to stay interesting throughout its entire length.

That, at least, is the case so long as you’re playing the N64 version. The PlayStation port, comparatively, didn’t do it for me. I’ll admit, of course, that there are good things in it. It has more tanks than the N64 game, it has more missions and it even boasts a few FMV cutscenes. The thing is, the extra missions are repetitious in the same vein as the first BattleTanx, the FMVs make Night Trap look like fine storytelling and the tanks, in general, handle poorly.

And let me openly say that I’m not exactly sure why they handle so poorly. All I know is that I was never as comfortable driving them as I was on the N64. As best as I can figure out, they simply turn more slowly on the PS1. It seems to take a second or two longer to move around, which wouldn’t be a problem if the enemies were slower to compensate. Sadly, they aren’t and you’ll die frequently and, in my opinion, unfairly as a result. Now, I will say that this could just be me. Out of curiosity, I looked up this game and, while there were some who agreed with me about this problem, there are others who enjoyed it as thoroughly as the N64 edition. That said, if I put the two side by side, I’d definitely peg the PlayStation game as being the weaker.

As for the N64 version, while I still prefer the original game for its better-presented strain of ridiculousness, I’d be remiss if I didn’t admit that Global Assault takes the cake as far as the BattleTanx games go. It improves on nearly every facet of the original’s gameplay and, in turn, delivers a play experience that shouldn’t be passed up if you have a working N64 and a predilection for big, fiery explosions.

Come back next week for my review of Battletanx on the GameBoy Col…. Just kidding! Next week I head back to the realm of PC games to take on the RPG behemoth Darklands. As always feel free to PM me comments, suggestions and recommendations for future reviews.