Towards the end of Homeworld: Cataclysm you play through a mission that’s short but intensely memorable. The crew of the Kuun-Laan and its fleet have just discovered a weapon that could help them stop the game’s antagonist, the Beast. Unable to get it working properly however, they seek out the Bentusi. An ancient race of ship-bound immortals, their technical prowess might be the key to defeating the Beast before it spreads out of control.

They soon discover, however, that the usually benevolent Bentusi are in no mood to help. Being especially vulnerable to the Beast’s infection powers, the Bentusi have built a powerful jump gate with the intention of fleeing the galaxy and abandoning the younger races to their fate. Hoping to stall them, the Kuun-Laan destroys the gate and begs the Bentusi for their assistance. Enraged, the Bentusi instead launch an attack, charging the player’s ships with an overwhelming force that you have absolutely no hope of beating.

And that’s where things get interesting.

Knowing that the war will be lost without the Bentusi’s help, the Kuun-Laan refuses to retreat. The player, in turn, is forced to play through a losing battle where the only thing your ships can do is to fight until they die. Even your strongest units won’t be able to do more than scratch the Bentusi’s paint job and, as the battle proceeds, more and more of their ships appear, turning the already tall odds into impossible ones. As this happens, the commander of the Kuun-Laan rages against the Bentusi, delivering what’s probably my favorite single sequence of dialogue from any game I’ve ever played:

“You are killing us! You and your precious stories! Who will remember the crew of that ship? Or are flicker lives not worth remembering… Look around, look what you’ve done to our fleet. All because we dared to get in your way! Look at yourselves- the Aloof and Mighty Bentusi! Slaughtering the people who asked for your help. You’re worse than the Beast. At least the Beast doesn’t pretend to be righteous!”


Setting aside that this is just a bad ass speech that’s delivered brilliantly, what I love about this is the fact that it actually treats the destruction of your ships like it’s a big deal. It might sound silly to some, but one of the things that’s often rubbed me the wrong way about real-time strategy games is how nonchalant they are about death. Just think, for a moment, about all of the RTS’s you’ve played in your life and how many soldiers, zerglings, starships and (insert cannon fodder) you’ve sacrificed in your various quests for glory. There were individual levels in Command & Conquer 64 (my first RTS) where I’d march hundreds of soldiers to their doom without so much as a second thought.

In comparison, I adore how the Homeworld series contrasts with that mindset. Rather than having you to start from scratch with each new level, your forces carry over from mission to mission. In other words, if you’re playing the story campaign, hitting your foes with the equivalent of zerg rush is a strategy that, in the long run, is ultimately kind of wasteful. It’s more valuable to take care of your ships, play to their strengths and keep them alive so they can fight another day. 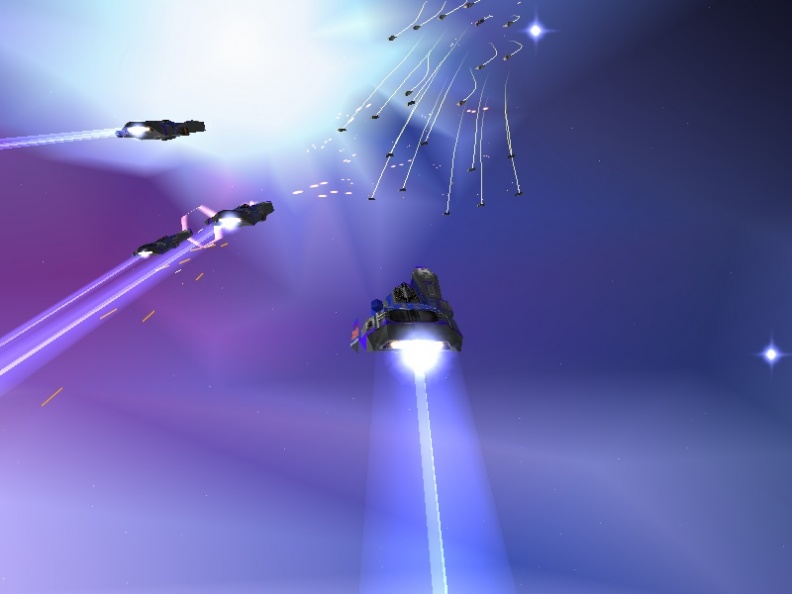 It’s a mechanic that, in my experience, also allows for some wonderful moments of organic storytelling. It’s been more than a decade since the first time I played Homeworld, but I can still remember going into the final level and seeing, among the ranks of my now vast fleet, a piddly little assault frigate that I’d captured in one of the game’s first missions. Despite having been in dozens of battles that had destroyed more powerful ships, it had managed to survive everything to be here in the final moments of the game. In that instant, I actually cared about that ship. It didn’t matter that, logically, it was just an art asset representing a few lines of code in a game I could switch off with the push of a button. Through the virtue of it having simply stayed alive for a long stretch, I found myself feeling genuinely attached to the little frigate that could.

Later, in another playthrough where I was focusing more on using fighters over capital ships, I began having similar feelings about my various attack squadrons. I worked hard to minimize their casualties because, in my mind, they weren’t just little bits of AI I could send carelessly into battle. They were my own personal Viper wing; exhausted, outnumbered and launching into battle day after day to protect the fleet from an impossibly superior force. When I took them into battle, I would experience genuine suspense and often felt truly sad when one of them inevitably got shot down. The battle with the Bentusi in Cataclysm likewise hit me especially hard. I had spent hours trying to keep my fleet intact, carefully maneuvering my smaller ships to avoid the Beast’s infection beam. To have them thrust into a situation where I was doomed to lose at least a portion of them like a gut punch to my imagination.


Now, it’s more than possible that this is an experience that others can’t share. My mind has always been one prone to daydreaming and flights of fancy. I can’t count the number of childhood bike rides that turned into Death Star trench runs or all of the times I’ve found myself stuck in a waiting room plotting out entire novels that I still haven’t written. What made Homeworld and Homeworld: Cataclysm special to me (in addition to everything else) was the way their built-in mechanics played into that. They weren’t just good games with addictive gameplay and great stories. They were games that got better the more I invested myself into them.

My biggest disappointments in Homeworld 2 and Homeworld Remastered came from the fact that their design and balancing made this kind of experience impossible. Once the fights in both games get big enough, frigate class vessels die in seconds. Using fighters in Homeworld Remastered likewise left me feeling frustrated thanks to their paper thin armor. Homeworld 2 was better in that regard but also took away the uniqueness of individual strike craft. Grouped into squadrons, their losses could be recovered by simply docking with the nearest carrier. They weren’t built to have any individuality. They were built to look cool blowing up.

None of this is to say, of course, that other real-time strategy titles are bad or lacking in depth. I have no doubt that in terms of sheer gameplay there are other titles that are leagues more complex than what’s offered in Homeworld and its ilk. That said, I’ve never played another RTS title that’s affected me in the same way as the good portions of that series. There’s never been another battle like the one with the Bentusi in Homeworld: Cataclysm. That game was released in 2000 and I’m hoping to experience something like it again someday.

Thanks to Homeworld Shots for the extra screenshots.

Next week I turn back to the world of classic consoles for a review of my first ever RPG: Final Fantasy. Feel free to PM me comments and suggestions in the mean time.