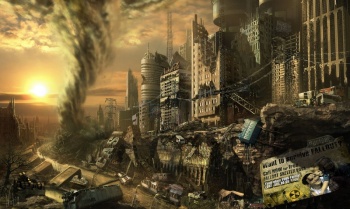 Court documents reveal an interesting twist in the legal wrangling over the Fallout MMO as Bethesda claims that the deal allowing Interplay to make the game never actually included the right to use any elements of the Fallout universe or previous Fallout releases.

Bethesda and Interplay have been tussling over the Fallout MMO since September 2009, when Bethesda filed a lawsuit claiming Interplay had breached its contract to make the game by failing to meet certain funding and development obligations. In December of that year a judge denied a preliminary injunction against Interplay which would have halted progress on the game and in April 2010 Bethesda dropped its appeal of that decision, leading to speculation that the two might have reached some sort of behind-the-scenes agreement.

The Readers Digest version is that Interplay sold literally everything Fallout-related to Bethesda back in 2007, including all trademarks, art, background source materials and whatever else you care to name, then licensed back the rights to make the Fallout Online. According to Bethesda, however, that agreement included only the right to use “one single asset – the Fallout trademark – in connection with a massively multiplayer online game.”

“The breach of contract claims asserted by Interplay… fail because Bethesda is not obligated or under any legal duty to allow Interplay to utilize the panoply of Fallout assets in connection with an MMOG,” it claims. “In the APA [Asset Purchase Agreement], Interplay further represented and warranted that any and all Fallout game assets that it owned were being transferred to Bethesda… The APA contained one single license-back agreement – the TLA [Trademark License Agreement]. The TLA plainly and unambiguously concerns one single mark – Fallout.”

The idea that Interplay would license the rights to make a Fallout MMO without also securing the rights to existing assets seems kind of crazy to me but as Jas Purewal of the Gamer/Law blog explains, if the argument pans out for Bethesda it will make life very difficult for Interplay. Interplay, meanwhile, is taking a big gamble by forging ahead with development on the game while the matter is still in litigation, because if Bethesda wins “it would in principle have the ability either to shut Fallout Online down or to demand that it be transferred to Bethesda’s ownership.”

“I can see the commercial benefits of what Interplay is trying to do: get the game as far developed as possible, both as a bargaining chip with Bethesda in any negotiations and because, if Interplay wins, it already has a game ready to go,” Purewal wrote. “On top of that, the Interplay Fallout MMO is now probably regarded by fans, gamers and the games industry as the Fallout MMO regardless of this lawsuit – so Interplay has won the PR contest there. So it seems like a smart move in those respects… if it wasn’t for the legal risk that it could all be taken away from them.”

“That said, it’s worth remembering that ultimately all of this remains to be tested in the litigation, so the ownership and the future of the Fallout IP is still undecided,” he added.

One other spot of bad news: Interplay’s most recent 10-Q SEC filing revealed that the company suffered an operating loss of $205,000 for the quarter ended September 30 and that unless it comes up with some source of funding, there is “substantial doubt about the Company’s ability to continue as a going concern.” I stopped betting against Interplay years ago, but I can’t imagine where it will go from here if this lawsuit doesn’t work out.

Gwen Stacy May Survive Longer than Expected in Spider-Man Reboot

Harmonix Buys Itself From Viacom