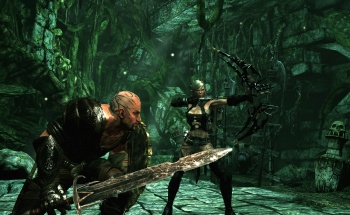 The Escapist was asked to come to the St. Regis Hotel during GDC 2010 to get a sneak peek at a new action title. Hunted: The Demon’s Forge takes place in a beautifully rich environment with which many gamers are familiar, the classic dungeon crawl. The third person action combat focuses on cooperative tactics and the exploration and puzzles you can expect from delving into the depths. While the game is published by Bethesda, it is being designed by Brian Fargo’s inXile Entertainment. Fargo, one of the original founders of Interplay, is overseeing development but Hunted is being directed by Maxx Kaufman while the game’s executive producer is Matt Findlay. There is no word yet on when Hunted will be released but it is planned to come out on the Xbox 360, the PS3 and the PC.

The relationship between Elara and Caddoc is a big part of Hunted. They are longtime partners (but not romantically involved) always looking for a buck and the pair is sent to a town by a strange spirit named Seraphim. The two are close, and you get a sense of their relationship from the quippy things they say to each other, which are really pretty funny. They play against type, with the female being much more bloodthirsty and aggressive while the fighter is more cautious. Elara is an elf and although she can use a melee weapon, all of her special skills are used with her bow, such as frost arrows. Caddoc is a melee fighter and all his skills are close range, but he can wield a crossbow when needed. If the pair bring crystals back to Seraphim, they can both unlock magic spells such as Hellfire which can blow up waves of ghouls or skeletons. You can use the spells offensively like a fireball, or you can use magic to charge up your partner’s weapon for a short time.

While Caddoc is effective as a front line fighter, Elara must search for high ground to support him. “She has all of the ranged skills, she has a melee attack but it’s kind of weak, and they both have the magic abilities in which they are equally powerful,” the producer Matt Findlay told us. “It’s about how all those things fit together and using the different strategies against the enemies. With all of the enemies having their own strengths and weaknesses, you have to figure what’s the best combination of your skills to go take them on.”

Obviously, teamwork between the two characters is important. Findlay and Maxx Kaufman were playing the demo and there was a lot of verbal communication between the two of them. We heard a lot of “Watch out behind you” and “Here’s a shield if you need one” and “I’m down.”

In the case of the latter, they showed us Hunted‘s consumable system. You can hold up to 3 potions at one time and, in a nice detail, they are visibly present on your belt. But not only can you drink the potion, you can also throw it at your partner to revive them. Also, Caddoc’s shields often get destroyed by enemies and he must replace them by scavenging the battle field. 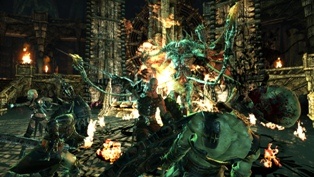 Because co-op is so important, the Hunted team took a lot of care in figuring out how you’d be matched up with other players. “The matchmaking system is very, very unique,” Findlay said. “It’s really easy to go online and have a good co-op experience with your buddies, but to take some random stranger off the street get the same experience is really challenging. I haven’t had too many co-op experiences that have been positive that way. We really wanted to fix that because co-op is such an integral part of what makes this game cool.”

They do this by internally computing how you play the game tracking variables such as how many enemies you kill per minute or how many secrets you find and the system will try to find a player that matches your play style. You can also set specific parameters when searching for a partner like whether you want to play only Elara or if you like to switch characters often or if you want to run with a noob or an expert in the game. “You can set those parameters up and the system will go out and find a player that fits that profile, and hopefully give you the same experience as if you were playing with a friend,” Findlay said.

As mentioned above, you can switch between Elara and Caddoc at special points throughout the dungeons as well as invest in their skills separately whenever you complete a level and meet with the Seraphim. Online co-op play is also rewarded heavily by allowing all of the crystals you earn to be taken back into your single player game to invest in skills.

While this all sounds very cool, being an old school Dungeons and Dragons player, I was most excited by the exploration available in Hunted. There are tons of puzzles and NPCs which tell more of the game’s story. Most of the puzzles are optional, you can definitely run-and-gun through the game if you like, but you are rewarded with cool Crossbows of Fire or similar items if you figure them out.

One feature I was particularly interested in is the Death Stone given to the pair by Seraphim. It reminded me of the D&D spell, Speak with Dead, and can be used with many of the dead bodies you find throughout the game. The spirits of these deceased will speak to you and tell you more details of the story or perhaps hints on where you can find treasure or how to solve puzzles. The best part is that these monologues play while you are still controlling the characters; they are effectively audiologs such as those found in BioShock. It’s a genius way to bring a staple of sci-fi gaming into the fantasy genre “using magic,” as Findlay said.

Overall, the team at inXile is doing their best to bring the action gaming genre back to where it started, the fantasy genre. Matt Findlay phrased it really succinctly: “We’re trying to bring back the dungeon crawl, while still being true to modern action gaming.”