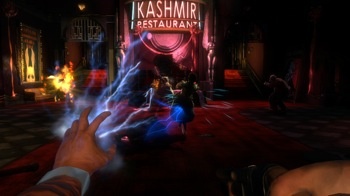 The BioShock 2 system requirements have been revealed and there’s some bad news inside for folks who don’t like SecuROM. (Steam users may not be too thrilled either.)

The return to Rapture is only a few weeks away and that means it’s time to give PC gamers a reason to start worrying about how BioShock 2 is going to run on their hardware. To kick off the pre-game fun, 2K has unveiled the minimum system requirements and I have to admit that it’s not as bad as I was expecting.

Yes, in spite of being demonstrably useless at anything but inconveniencing legitimate game buyers, the infamous SecuROM will be a part of the process. And don’t think you’ll be able to dodge that bullet by buying the game through Steam: The Steam version of the game will still make use of the SecuROM activation procedures and will also require players to log into Games for Windows Live (after connecting to Steam, one would assume) in order to play multiplayer.

Not to be Buzzkill McGee here, to borrow a phrase, but this announcement doesn’t exactly stoke my enthusiasm for BioShock 2. Didn’t we learn our SecuROM lesson the last time around? And why is GFW Live multiplayer being crammed down our throats when the game is being sold over Steam? For a game that Take-Two rather badly needs to be a big success, this seems to me like a very wrong-headed approach to take.