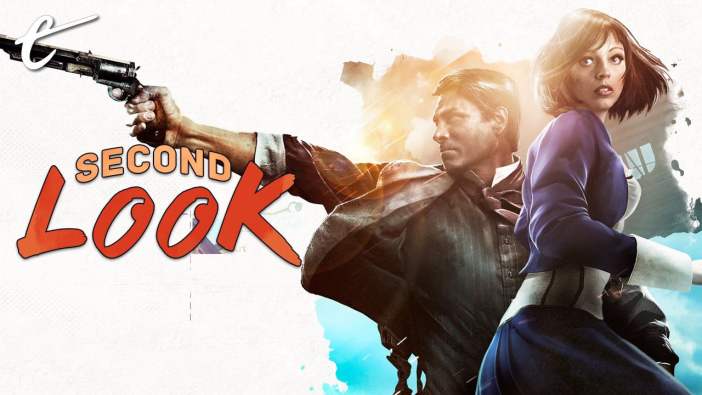 BioShock Infinite is as much a failure as a success. It succeeded in how it made players feel at launch through more emotional stimuli like your AI companion Elizabeth and the gorgeous aesthetics of the floating city of Columbia. It arguably failed in barely feeling like a BioShock game and in having holes in both its plot and its message about American politics and religion.

Infinite changed dramatically over the course of its development. The game we were all promised in 2010 with the game’s longest E3 gameplay demo looked like a true successor to BioShock, if still highly divergent, but behind the scenes it still needed a lot of work. In early 2012 — a year before release — Irrational Games brought on Jordan Thomas and Rod Fergusson to rein in development and finish the game. The result is a game that’s absolutely shippable and technically delivers on several promised features — just rarely in the way those features were clearly intended.

For instance, take your objective and companion, Elizabeth Comstock. While incredibly charming, she’s just a gopher who grabs things for you and a narrative explanation for the Tear mechanic that rips holes in reality. She’s never in danger unless the plot needs her to be. There’s no reason to get mad or frustrated with Elizabeth because she’s functionally a tool.

This emphasis on avoiding friction is a key upside and downside to Infinite on a whole. It’s very hard to lose while playing BioShock Infinite. Your basic guns, without any upgrades, can decimate most opponents. Unique enemies who wield elemental damage or distinct strategies are often used either as minibosses or full-on boss fights, whereas they’d been previously advertised as regular enemies much like the variety of Splicers and Big Daddies you fought in the previous two games. Thus, the majority of the time you’ll be crushing squishy human enemies with extremely generous hit boxes. 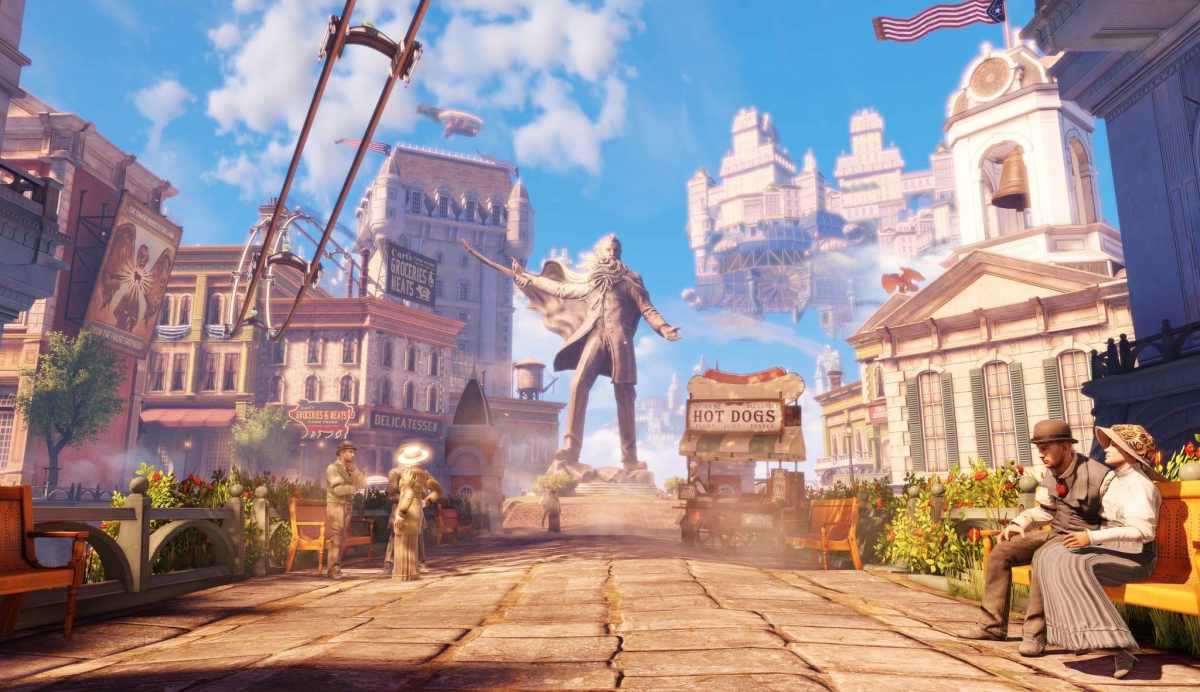 You can choose to use your starter pistol across the entire game and be fine. It has ideal accuracy, ammo capacity, damage output, and several upgrades that make it even more powerful. In fact, with the two-gun limit imposed for the first time in BioShock Infinite, the weapon upgrades effectively necessitate you pour all your money into the weapons you like, then ignore the rest. The Vigors, the awkward stand-in for Plasmids, rarely offer upgrades. Elizabeth’s abilities can’t be expanded in any way. Your own stats are improved via swappable clothing rather than permanent passive bonuses. The only non-weapon-based upgrades that are crucial are bottles that can increase your health, “salts” (mana), or armor (Halo-style energy shield).

As such, you’re free to go sailing through like it’s nothing. Outside of an incredibly half-baked stealth sequence and an infuriating final battle that doesn’t even have much narrative payoff, BioShock Infinite is remarkably, almost troublingly easy. Worse, upping the difficulty only weakens your health bar and makes enemies spongier.

To a BioShock fan, this is startling. The preceding BioShock games often rewarded carefully upgrading your character, customizing a unique build, and making meaningful choices in how you navigate each combat arena and puzzle — the latter of which barely exist in Infinite — and most importantly, they ensured that higher difficulties encouraged shaking things up. When you can’t tank in the first two games, you suddenly find yourself being stealthier. Even previously clear-cut moral choices involving power have greater complexity.

BioShock Infinite has none of that. It even dramatically simplifies hacking. What was once a minigame so involved it had its own related perks is now an optional bonus if you don’t mind blowing a fair bit of your science-magic.

However, the elements that make Infinite a pretty terrible BioShock game are also often the most popular tropes in successful narrative games. It’s accessible, hard to fail at, lavishly detailed in both audio and visual design, and incredibly well-acted. Which is to say that BioShock Infinite isn’t really about its mechanics or systemic design — it’s about making you feel things as you play it, and that’s the one area where it mostly succeeds. Kind of. 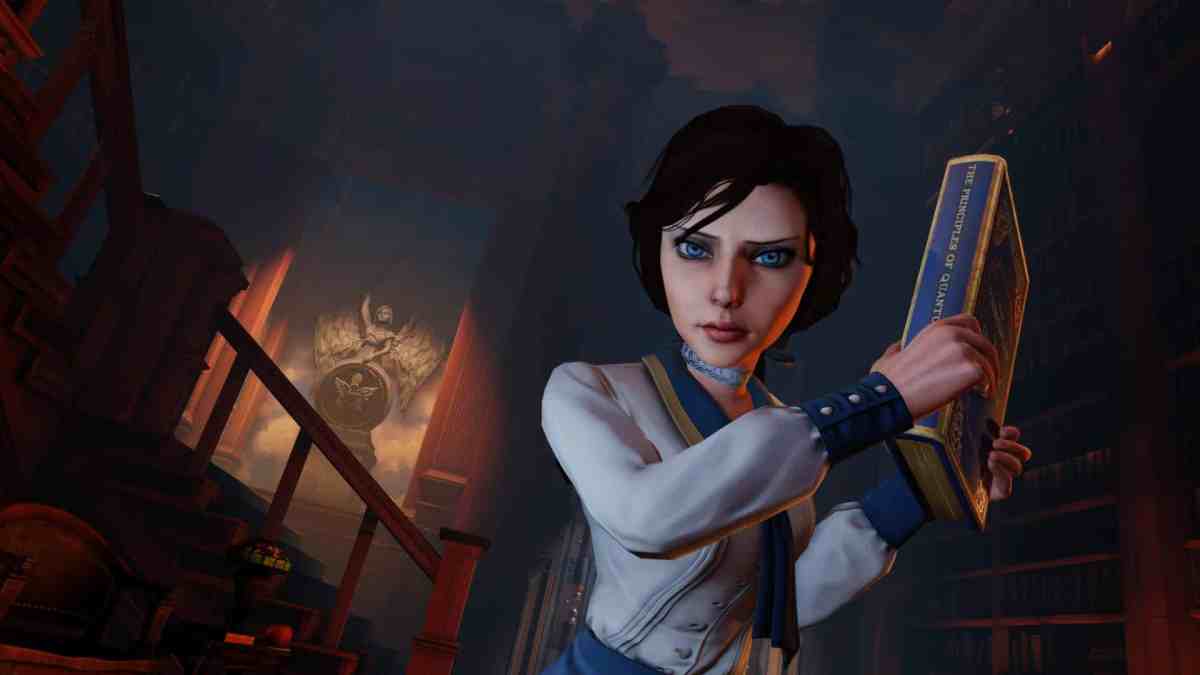 Protagonist Booker is a gruff everyman voiced by Troy Baker, which at this point is a cliche, but in 2013 Troy Baker wasn’t in every video game. Meanwhile, Courtnee Draper’s performance as Elizabeth is spectacular, easily one of the strongest examples of why Disney princesses charm millions. You instinctively want to protect her and help her escape into a bold new world, which is crucial as the rest of the story has absolutely no idea what the hell it’s doing.

BioShock has always been an incredibly political series. The first one was about a pure capitalist and atheist society, and the sequel was about collectivism and religious dogma. Meanwhile, BioShock Infinite is either a critique of “both sides”-ism, which would make it incredibly timely, or it’s in praise of “both sides”-ism, which would make it one of the worst attempts at political critique in a while.

Basically, everyone in Infinite is either a terrible person or so ineffectual at changing things that any time they come close to achieving their goals, it ends horribly. I don’t mean this in a Far Cry 4 “power corrupts” way either. That would be an effective way to explore how either side of a political spectrum can be corrupted. Rather, most people are literally awful in Infinite.

The Prophet and his flock are all jingoistic, racist, xenophobic, hate-spewing monsters who think slavery is great and that even early 20th century America is just too liberal for their tastes. The Vox Populi and their leader Daisy Fitzroy are at first portrayed as downtrodden revolutionaries, but then Daisy’s ready to kill a child (DLC ineffectually tried to retcon this.) and the Vox are just rampaging barbarians blowing up literally everything. There’s also an industrialist in the middle of everything who interrupts the plot for an extremely unnecessary set of chapters that mostly just introduces massive plot holes.

That’s not even getting into the way the game drops the ball with religion, because my speaking as a Christian, BioShock Infinite misses so many obvious points of critique that would’ve been far more meaningful than what we get. Yes, I’m seriously saying Infinite didn’t criticize my religion as hard or thoroughly as it could’ve. That isn’t surprising when you learn that Ken Levine literally didn’t understand the point of Jesus until a developer almost quit the game very close to release. I’m genuinely curious how much more off the rails the religious themes might have gone without that. 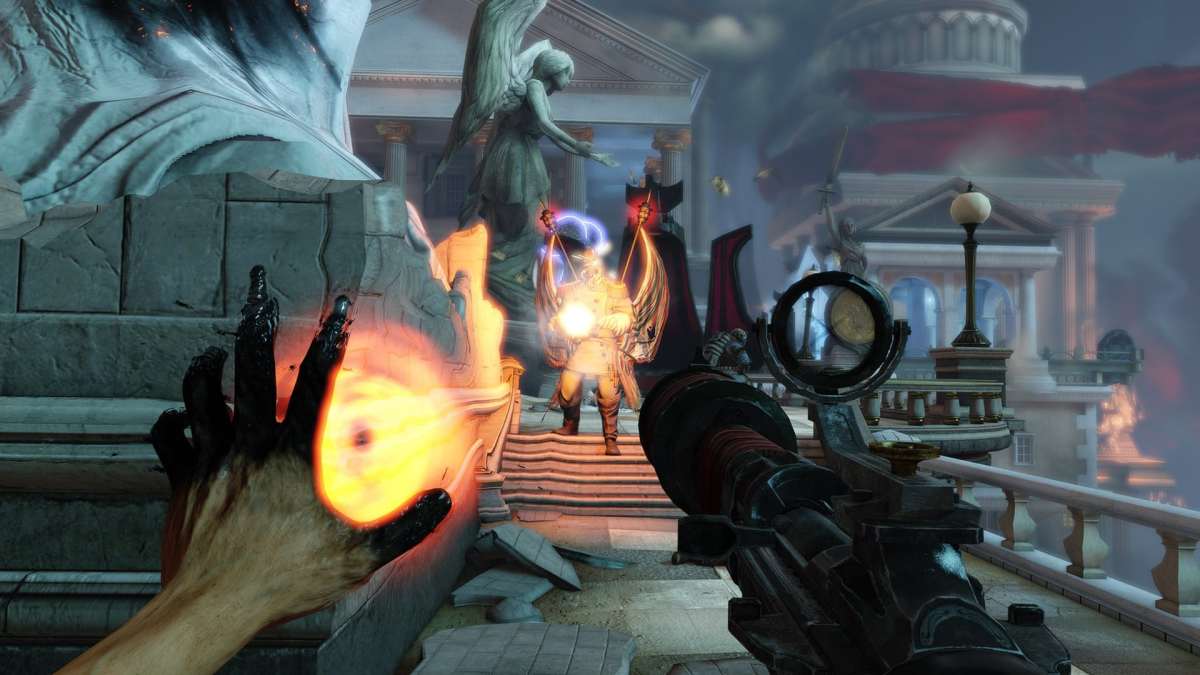 Again though, even as BioShock Infinite completely drops the ball as a critique of politics, religion, and modern society, while you’re in the moment, the emotional beats work on a superficial level. Everything is finely tuned to make you empathize with Booker and Elizabeth’s journey, from the thrill of enjoying one of Comstock’s artificial beaches in the sky to the heartstrings pulled by Elizabeth’s staunch efforts to help an Asian couple trapped between the machinations of the industrialist villain. If you stop and think about basically anything happening, it all shatters, but Infinite is typically rushing along so quickly that it barely gives you the chance.

The cherry on top of this incredibly messy narrative is the Lutece twins. Jennifer Hale and Oliver Vaquer are fantastic as these pseudo-Doctor Who stand-ins who constantly talk in riddles while goofing around. They’re the lynchpin that ties the entire story together, incredibly amusing, and like a giant neon sign screaming the problems of the plot.

In an attempt to make fun of how linear games and choice are, rather than allow for branching narrative, BioShock Infinite has a single course of events — all you can do is impact trivial token moments that purely impact you on an emotional level. Players might think that choosing to adorn Elizabeth’s necklace with the image of a free bird or a cage will have some sort of Fable-esque significance, but no, it’s just the Luteces messing with you. Whether you get stabbed in the hand, or preempt and ambush, or try to throw a ball to appease racists, or smack the mob’s ringleader in his stupid face with the ball — nothing you do matters, and the Luteces know it.

Where the first time through the Luteces prove a charming mystery, they later turn into an annoyingly smug commentary on how pointless the story is. The end result of Infinite is to prevent its events from ever transpiring, so as a result, nothing that happens on the way matters. It’s just a long series of regretful events you wish could’ve turned out differently. 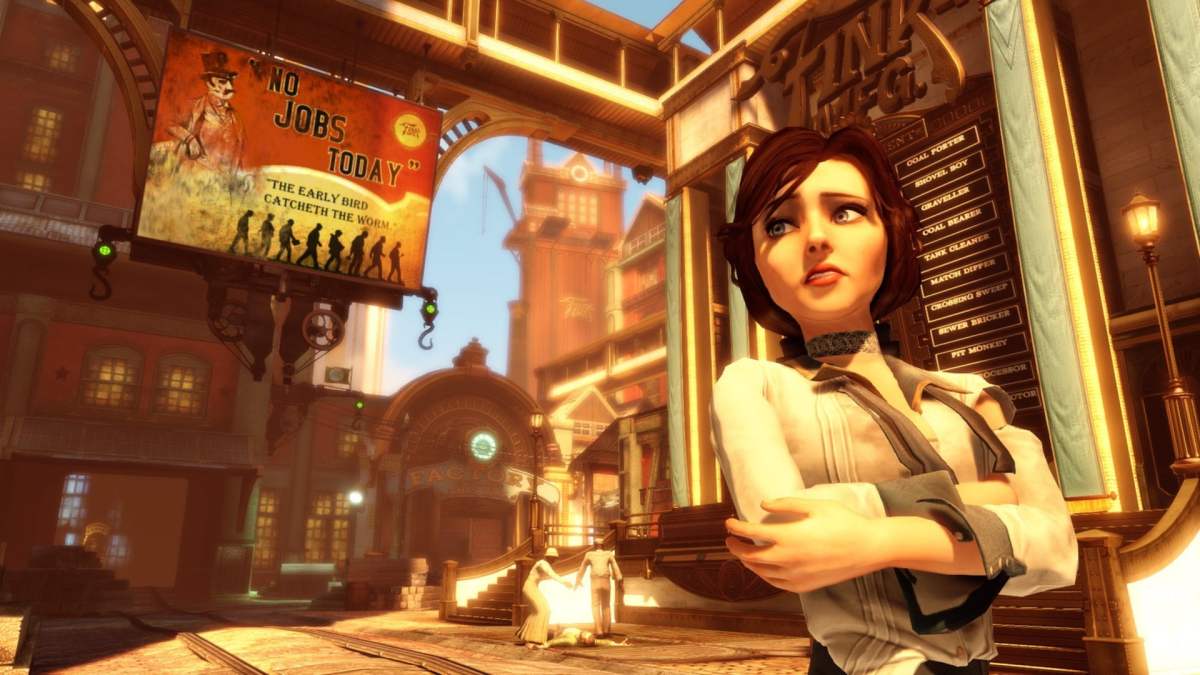 This is the one constructive way to view BioShock Infinite — that it’s not even about the story itself or the gameplay, but a journey of experiencing regret. Of thinking back and wondering if maybe, just maybe, if you’d tried something different, things could’ve gone better. Except you can’t change the past, and you have to live with your mistakes. It’s really the only thing Infinite consistently succeeds at with every subsequent playthrough.

This is also a very interesting interpretation when bearing in mind Burial at Sea, the game’s two-part expansion. There’s nothing Burial at Sea would love more than to rewrite the past more vigorously than George Lucas’ constant retouches to the Star Wars saga, so it makes for quite the contrast — but we’ll get into Burial at Sea another day.

BioShock Infinite itself is a mess, no matter if you love it or hate it, and I feel like it’s time for us to just admit that. This isn’t some lavishly detailed singular vision, but a desperate scramble to deliver a shippable game that hopefully at least makes you feel something. And you know what? It’s totally great if that’s your bag and equally fine if you can’t stand it. Some of my favorite games are deeply flawed in some way or another. Infinite is a pretty terrible BioShock game, but clearly it executed well on making certain players fall in love regardless. It’s okay to like, even love, something while acknowledging its problems.

All that said, we’ve explored games that missed their mark, redeemed themselves, and now a game that’s a bad sequel but an appealing experience for some. So what’s a great sequel look like? What is one of the best reinventions in gaming? We’ll be getting to that next week! It’d be dishonorable to spoil the surprise.