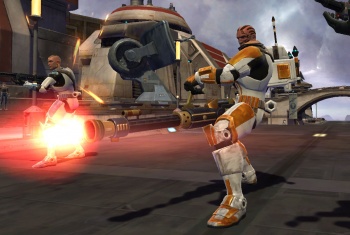 BioWare thought that making a fully-voiced conversation system in the upcoming MMOG Star Wars: The Old Republic was a “dumb thing to try” but decided to go for it anyway after seeing how well it worked in Mass Effect.

Star Wars: The Old Republic was unveiled at the 2009 edition of E3 as the first fully-voiced MMOG ever, but it wasn’t always going to be that way. The original idea was to create a more conventional conversation system along the lines of that used in Dragon Age: Origins. But that plan fell apart when the Old Republic team ran headlong into Mass Effect, BioWare’s other, more interesting hit sci-fi franchise.

Fully voicing an MMOG is “a massively insane expenditure and hugely complicated” undertaking, said BioWare Lead Designer and Writer Daniel Erickson. “You have to cast 16 of the best actors ever and then hold them for eternity.” But when Mass Effect launched very early in the development of The Old Republic, Erickson gathered up James Ohlen, the lead designer on Baldur’s Gate, Knights of the Old Republic and Dragon Age: Origins and gave it a look.

“We both saw Mass Effect and were like, ‘Okay. There is no choice here’. So we rounded up both sides – us and LucasArts – and despite it being a huge undertaking, we showed them one with VO and one without and we attached a price tag to it,” Erickson said. “We thought they wouldn’t go for it. We were like: ‘This is a dumb thing to try to go for [in] an MMO’. It came back unanimously from both sides – we had to do it.”

“Mass Effect changed the world because you became the hero,” he added. “We had to go back and rewrite everything. The storytelling system is totally inked from Mass Effect.”

Star Wars: The Old Republic is currently targeted for release in spring 2011.

Doctor Who Rocks the Stage at Glastonbury