This week, Pacific Rim brings us something long absent from cinemas: those glorious stompy monsters, the kaiju. Like all monsters, Pacific Rim’s take on kaiju reflect the fears and insecurities of society, but kaiju tend to reflect something very specific that’s been translated from Japanese culture – they’re a stand-in for pure unstoppable force. Originally, these monsters represented the mass casualties and destruction of the Second World War.

All monsters play on societal fear, and as those fears change over time, so do the monsters. What scares us one decade can seem laughable the next, and the stories that survive are those best adapted to popular worries. Vampire legends originally centered around a fear of poorly-understood diseases like tuberculosis, but by the Victorian era became a symbol of dangerously unrestrained sexuality. In the original novel The Island of Doctor Moreau, the titular character creates his animal-human abominations through vivisection and blood transfusions, but by 1996 such ideas were old hat – no one was afraid of blood transfusions anymore – and the Marlon Brando remake replaced them with genetic engineering. As for kaiju, they began with Godzilla: a terrifying and potent symbol of nuclear warfare.

It’s difficult to describe the raw power of a nuclear blast. You can say that the Hiroshima bomb had a blast yield of 16 kilotons and Nagasaki had around 22 kilotons, but what exactly does that mean? Here’s one attempt: I attended a press conference on Tinian in 2004 where Enola Gay pilot General Paul Tibbets talked about the Hiroshima mission. According to him, he knew the bomb had worked not because of the flash or the shockwave, but because he could suddenly taste all of his dental fillings. That’s what 16 kilotons means when you’re 11.5 miles away at 31,000 feet. On the ground it means something different. It means the shockwave can drive shards of glass into a concrete wall and cause buildings over a mile away to levitate for a moment before falling over “like domino pieces,” as one Hiroshima survivor put it. The radiant heat can scorch the clothes right off your skin, or into your skin, or strip you down to the muscle. It can literally burn your face off, leaving behind a glossy, eggshell-smooth orb with depressions for eyes and a lipless mouth. But more than that, an atomic blast burns itself into a country’s memory. While the firebombing campaign destroyed more cities – sixty-six of the cities hit lost 40% or more of their urban area, with Tokyo itself losing 50% – the shock of losing 90,000 to 166,000 people in a single blast etched a particular kind of horror onto the Japanese consciousness.

Yet in the years following the war, the Japanese couldn’t talk about it. The American occupation forces suppressed local media from reporting on the atomic bombings for fear it might stoke anti-American feelings or unintentionally provide the Soviets with atomic research. Censorship reigned supreme. The only writing about Hiroshima that circulated in Japan were a series of New Yorker articles about six victims and their lives before, during and after the bombings. But even after the occupation ended in 1952 and Japan began governing itself under there was social pressure not to discuss the bombings – both because they were still fresh and painful, and because Japanese authorities worried that discussion might endanger the treaty that ended the occupation. But that was about to change due to a single ship, the Daigo Fukuryu Maru or “Number 5 Lucky Dragon.”

The Lucky Dragon was a long-line wooden fishing vessel. It was 140 tons and 25 meters with chronic engine trouble and a pitiful top speed of 5 knots. On March 1st, 1954 the Dragon was well out of its normal fishing grounds – it’d lost half of its lines a month before when they snagged on a coral reef, and in order to avoid disgrace the inexperienced 22 year-old captain struck into the Marshall Islands, hoping to get a decent catch before the food ran out. At 6:45 that morning, the crew saw a bright flash through the porthole. When they poured onto the deck, they saw the whole of the western horizon lit like a sunset. Several hours later, a rain of white powder overtook the vessel. “White particles were falling on us, just like sleet,” remembers Matakichi Oishi, who was a 20 year-old crewmember on the Dragon. “The white particles penetrated mercilessly – eyes, nose, ears, mouth.” As the crew ran in their long-lines and prepared to return to Japan, they began to notice burns on their skin. Soon they also began to experience nausea, fatigue and vomiting.

The flash they’d seen was “Castle Bravo,” the first test of a hydrogen bomb, eighty-five miles away on Bikini Atoll. The white powder they referred to as shi no hai, the “ashes of death,” turned out to be atomized coral impregnated with a poisonous mix of radioactive isotopes. Without realizing it, the Dragon and its crew had approached the U.S. exclusion zone for a major nuclear test. Even so, the Dragon would’ve been well clear except for one fact: the dry-fuel thermonuclear device was 2.5 times more powerful than scientists estimated, and 1,000 times more powerful than the Hiroshima bomb. The resulting explosion sent fallout drifting far outside the intended area, irradiating not only the crew of the Dragon but several hundred Pacific Islanders and 28 American servicemen assisting the test. 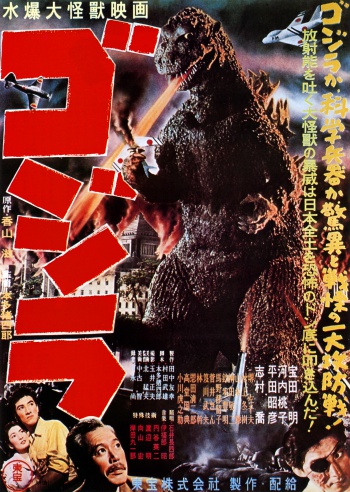 Japanese media jumped on the story after the Lucky Dragon returned to port. Japanese doctors diagnosed the men with radiation sickness straight away, panic swept the country when authorities realized the test had contaminated large amounts of tuna that were filtering into the local fish markets. Relations between the U.S. and Japan soured when the Eisenhower administration dragged its feet assisting with the crew’s medical treatment, and refused to offer an adequate apology. Anger over the Lucky Dragon incident popped the cork on the societal pressures that limited discussions about nuclear tests and put the topic into the national spotlight. The media attention surrounding the recovering crewmen – one of whom, Aikichi Kuboyma, died from radiation poisoning – served as a rallying point for anti-war, anti-nuclear opposition parties that became a staple of Japanese politics and came close to toppling the government in June 1960. Japan suddenly went from a place where atomic weapons were not discussed to one of the world leaders in the nonproliferation movement. On August 6th 1955, the 10th anniversary of the Hiroshima bombing, the still-rebuilding city hosted the first World Conference Against Atomic and Hydrogen Bombs. But the first media figure to take on the atomic bombing of Japan was a towering rubber lizard named Gojira.

Gojira (released in America as Godzilla, King of the Monsters!) premiered in late 1954, wrapping the terror of Hiroshima, Nagasaki, and the Lucky Dragon incident in the guise of a horror film. The film starts with an explosion and a mysterious force that sinks Japanese fishing boats. The result is not contamination, but a monster arisen from the deep, a dragon that swims inexorably toward Japan ravaging islands along the way, until finally it rampages into Tokyo, flattening buildings and scorching the earth with its atomic breath. Much like in 1945, when the Japanese military’s air defenses were too weak to protect the home islands, the newly formed Self Defense Force is powerless to stop the creature. This is all intentional. The film’s director, Ishiro Honda, had seen the war up close – he served in the Imperial Army and ended the war as a POW in China. Godzilla isn’t just a big lizard that likes smashing buildings, he’s a lumbering personification of the American war machine from a Japanese perspective: amphibious, unstoppable, leveling cities, burning victims with nuclear fire, and even when he returns to the sea, there’s always a sense he’ll return. The film even includes a super weapon so powerful, the protagonists decide to destroy it after using it on the monster. The messaging was so clear that it created an interesting split – the Japanese saw Godzilla as a horror film, but U.S. audiences tended to root for the monster.

Godzilla was so successful that it spawned a new genre of Japanese film: the kaiju movie. While many of the early kaiju kept the theme of nuclear mutation and overwhelming force – Rodan was clearly a stab at depicting an aerial assault – like all monsters they evolved and changed along with the popular consciousness. In 1963, when U.S.-Japanese relations had improved and there was some worry that the Soviets could attack Hokkaido, Toho released King Kong vs. Godzilla, a film that cast an American monster defending Japan after Godzilla arises in the Arctic Ocean. Later, as memories of the war faded or got swept under the rug, filmmakers repurposed the lizard king as a force from old Japan, defending the homeland from attack and personifying the battle between traditional Japanese values and modern manufacturing-obsessed materialism, most notably in Godzilla vs. Mechagodzilla and The Terror of Mechagodzilla. By 2001’s Godzilla, Mothra and King Ghidorah: Giant Monsters All-Out Attack, the creature came full circle – in this version, Godzilla is made up of the angry spirits of Japan’s war dead, come to take vengeance on a nation that has forgotten their sacrifices.

Throughout each incarnation, however, Godzilla embodies a powerful force – be it nuclear weapons, Soviet invasion, or the loss of traditional values – that Japan seems powerless to stop. That narrative has continued not only for the kaiju of Japanese film, who can represent anything from industrialization to forces of nature, but for large movie monsters the world over. Cloverfield used a monster attack to reenact the confused panic of the September 11th attacks. South Korean blockbuster The Host shows a monster developing after an American scientist tips chemicals down the sink, polluting the water system. Pacific Rim has giant beings crawling from the sea to attack American cities, and the technology vs. nature theme – along with Idris Elba shouting, “Today we cancel the apocalypse!” – seems to hint at leveraging technology to fight global climate change. All because sixty years ago, Honda found the perfect metaphor for mass destruction.

However Guillermo del Toro decides to play it in Pacific Rim, I’m glad between it and the Godzilla remake, kaiju are once again surfacing off our coast. In a world where we’re dealing with such larger-than-life forces, from melting icecaps and overpopulation, to terrorism and monster hurricanes – it’d sure be nice for a guy in a rubber suit to put it all in perspective.

Robert Rath is a freelance writer, novelist, and researcher who lives at the bottom of the Pacific, occasionally arising to ravage the coast. You can follow his exploits at RobWritesPulp.com or on Twitter at @RobWritesPulp.