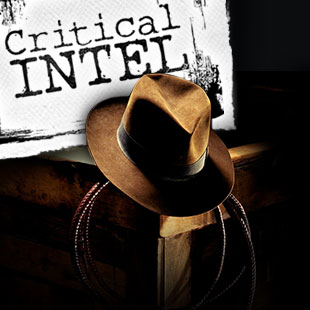 When reports surfaced last week that Disney was considering Chris Pratt as the new Indiana Jones, the internet reacted – well, the way we’ve come to expect.

My own reaction? Positive, and that surprised me. I’m and Indy fan, a die hard Indy fan. Last Crusade was the first film I saw in a theater. On my tenth birthday, I got a fedora and a real ten-foot bullwhip. I still have a full run of Dark Horse’s Indiana Jones and the Fate of Atlantis comics. If anyone was going to hate this idea, it was me.

And yet I didn’t hate it.

It took me several days to unpack why I wasn’t crying heresy, and when I did I learned this: to me, Indy is bigger than Harrison Ford. And we need Dr. Jones now more than ever.

Ford’s as Human As the Next Man

People love to say that there’s only one Indiana Jones, but that’s demonstrably not the case – and as a kid, I accepted that.

Five actors have played Indiana Jones. Ford and River Phoenix took the role in the movies, and three actors portrayed Indy in the Young Indiana Jones Chronicles. The show had an 11-year-old Indy traveling the world, a teenage Indy in the Great War, and the infamous “Old Indy” who hung around in the 1990s teaching people moral lessons. (Lucas cut Old Indy out of the DVD release so that the scenes didn’t clash with Crystal Skull – presumably because Lucas is an android who will self-destruct if he detects contradictory information). As a kid I completely accepted that all these different people were Indy, and the fact that they didn’t look like Ford (or even much like each other) didn’t bother me one bit. And when I revisited the series a couple of years ago, it still held up. While Corey Carrier did a creditable job as young-young Indy and George Hall made a fine old Indy, it was Sean Patrick Flanery that nailed the character. Sure, he had a lot of help from costuming, Indy-like action scenes and a few borrowed mannerisms, but when I looked at him I still thought that’s Indy. This realization softened my previous assumption that no one except Harrison Ford could wear the hat. Other actors have done it, and it’s entirely possible others will do it.

And to those who aren’t convinced, I have two words: Crystal Skull.

This is How We Say Goodbye at Lucasfilm, Doctor Jones 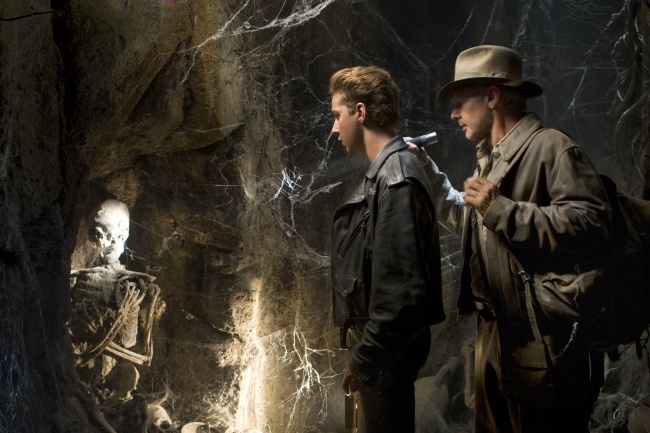 Indiana Jones and the Kingdom of the Crystal Skull is the movie we deserve for our “no recasting” rule. Why Russians? Because Harrison Ford’s in his mid-sixties. Why UFOs and mind control? Because it’s the ’50s, Soviets don’t give a damn about religious artifacts, and you work with what you have. You can trace almost every poor choice in the film back to Ford being in it.

Having said that, I don’t hate Crystal Skull the way some fans do. Skull has a lot of cool moments between the lighter-than-air CGI and confusing plot. The motorcycle chase and bare-knuckle brawl on the anthill captured that old Indy magic. Parts of the warehouse scene stick with me. It’s more just okay than actively bad, but that isn’t what bugs me. I can live with a sub-par Indy adventure. The movies are self-contained enough that one weak link doesn’t detract from Raiders or Crusade in the same way the Star Wars prequels messed with what came before. No, to me the tragedy of Crystal Skull would be seeing Indy go out on a down note. I’d rather risk a new Indy film – even with a recast Indy – than have Crystal Skull stand as the finale. A recasting would be the perfect opportunity to take a mulligan.

And let’s be clear that if there’s going to be another film, a recast must happen. Absolutely. Must.

It’s Not the Years, It’s the Mileage

Hard truth: Harrison Ford isn’t Indiana Jones anymore. Not like he was twenty-five years ago. Sure, he still looks good in the hat and jacket, but I never wanted to be the Indy in Crystal Skull. And that’s the key with Indiana Jones. Much like the Bond movies, Indy’s a wish fulfillment character. He’s bold, lucky, handsome, smart and worldly. He travels to exotic places and beats up bad guys while stealing legendary treasures. He’s handsome and gets the girl. Ford could still barely pull this off in 2008, but even then it was inconsistent. Action scenes didn’t feel as virile as they should have. The youthful comic delivery and facial expressions from Ford’s younger days seemed a little off. It still felt like Indy, but an aging Indy who was off his game.

Let’s agree that, if we’re really going to do Indy again, we can’t go back to that well. Ford had his shot. He will always be the definitive Indiana Jones like Connery’s still the definitive Bond. It’s time to look for someone else. 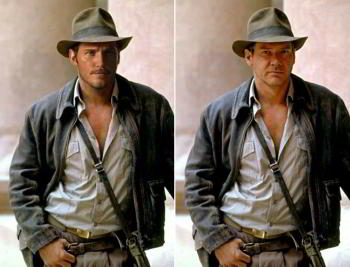 Pratt Will Blend In, Disappear

When the Pratt rumor floated up, it made immediate sense to me. However, I think the overarching assumption is that he was good in Guardians of the Galaxy so he’ll be good in Indiana Jones. That’s not wrong, but I think there’s more to it than that.

First of all, Pratt’s funny. The guy delivers one-liners and snappy retorts like he was born to it, and his facial expressions are strong. And fans often forget that while Indy flicks are action movies, the dialogue gravitates toward screwball comedy. Characters don’t talk, they snipe, bicker, flirt and occasionally take a break to get solemn about an artifact. Indy’s facial expressions during fight scenes swing back and forth from furious and pained (when he’s slamming a Nazi into a truck dashboard) to near-slapstick (“Whiskey…”). In fact, if I had to fault Crystal Skull with one irredeemable sin it wouldn’t be the CGI prairie dogs or fridge nuking, it would be that the film wasn’t very funny. The jokes were on the page, but they didn’t land on the screen – and Chris Pratt can land a joke.

But to dismiss Pratt as a mere comic actor would sell him short. Parks and Rec and The Lego Movie proved he had excellent delivery, and Guardians of the Galaxy established him as a credible action star – but Pratt isn’t all chuckles. He put in good performances in Moneyball and Zero Dark Thirty, both of them serious roles. That’s important, since to play Indy an actor needs enough gravity that he keeps all the fantastical action elements in orbit around him. That’s what Ford always excelled at – being an anchor that kept a scene believable.

So is Pratt the perfect new Indy? Of course he isn’t. Barring rapid advancements in cloning we’ll never get an actor to replace Ford – but we could get someone who can uphold tradition while putting a fresh spin on the character. Pratt’s a good candidate, but if Pratt he the role (let’s remember, this is a rumor) he’ll still have to work on a few things. Matching Ford’s classic physique shouldn’t be a problem, since Pratt probably lists “rapid physical transformations” on his résumé at this point. He’ll have to pitch his voice an octave lower though, since I can’t imagine Indy dialogue sounding right with Pratt’s chattier vocal style – but then again, who knows? Should Pratt take up the fedora, he’ll probably be play a younger Indy sometime in the 1920s or early ’30s, embroiled in the Chinese Civil War, the rise of fascism, or the Turkish War of Independence. (Istanbul has huge potential as an Indy setting.) That time separation alone – different period, different Indy – might distance him from Ford enough to ease the transition.

It Belongs in a Museum 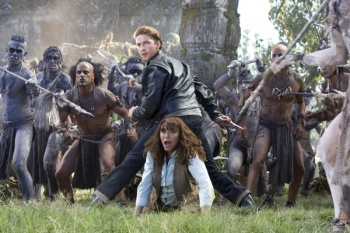 Having said that, I can understand the sentiment that the films should be left alone – that we should preserve Indy rather than risk a decline in quality.

I understand that instinct, but I also think it’s wrong.

What ultimately squared me with Crystal Skull was when I saw two kids playing Indiana Jones in a Costco. Almost 20 years before, I had been that kid, and watching Indy dig for treasure, dodge traps, and fistfight Nazis sparked my interest in history. As a nine-year-old, I devoured anything I could find about ancient Egypt, archaeology, and the Crusades attempting to be like my hero. Indy made anthropology cool and library research feel dangerous. Hell, he made reading Latin look sexy, and I can tell you from personal experience that’s nigh impossible. Watching Indiana Jones made me want to see the world, a chain reaction that eventually landed me at Angkor Wat, Machu Picchu, the Himalayas, and next to a 25-foot anaconda in the Amazon. It’s why I took vacations from my office job to volunteer on archaeological digs in New Mexico. Without Indy, I might never have majored in history – meaning I wouldn’t be writing this column right now. These movies changed my life, and I don’t want to deny some kid that same opportunity.

Recasting Indy makes me nervous, but if we shelve him I worry he’ll become an artifact that only holds meaning for my generation. Raiders turns thirty-five next year. By the time I have kids old enough to see it, it will be on its way to fifty. I’d like to think they’ll still find it relevant and exciting, but a film made for your parents’ generation, no matter how good, never feels quite as special as one you saw in the theater. And in this world of Transformers and superheroes, I want kids to have a hero whose powers amount to a PhD, language skills, and the ability to take a punch. That’s why Indy’s special – as a kid I knew I couldn’t grow up to be Batman or a Ghostbuster, but I could conceivably be an archaeologist, travel the world and learn another language. We need heroes like that right now. The world’s only getting more global, and we need heroes that are good travelers, multilingual, and can navigate other cultures. These, along with technological know-how, are the defining skills of the 21st century.

And if recasting Indiana Jones gives one more kid that sense of adventure, that drive to explore, a hunger for fortune and glory, then I’m all for it.