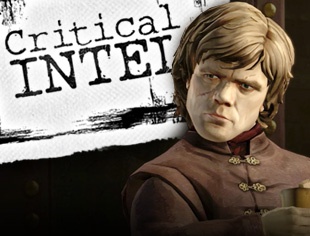 Dangerous conversations. Fateful decisions. Personal grievances that send armies marching down the Kingsroad. More than any other property, Game of Thrones deserves the Telltale Game treatment. While audiences know GoT for its explicit sex and brutal violence, it’s the show’s preoccupation with dialogue that makes it so addictive – and Telltale’s new episodic game understands that.

While Game of Thrones resides in the fantasy genre, it’s ultimately about politics. And like all political dramas – from Shakespeare’s Julius Caesar to House of Cards – the violence always evolves out of conversation. When a character dies, the show establishes a clear reason in advance. Characters discuss the act either directly or obliquely, and they mull over the violence and its consequences. Death is not death in Game of Thrones, it’s another domino falling. Three seasons later, we’re still dealing with the consequences of Ned Stark’s death. The show sows the seeds of character death well in advance, often when the audience doesn’t realize it. Artistically, it’s a trick as old as Shakespeare: Caesar glorifies himself. Brutus struggles with the morality of assassination. The senators kill Caesar, and Antony eulogizes him, setting the stage for Brutus’ own death. In GoT, the fact that the audience never knows exactly what will precipitate the violence is what keeps us watching – any conversation might have import, any wrong move or poor alliance could start the headsman’s axe swinging. It’s riveting.

Telltale built their reputation on stuff like this. The Walking Dead kept us on edge with difficult decisions, and their subsequent games have expanded on the studio’s strong dialogue-based play. Let’s face it: no one plays Telltale games for the action scenes, which are alright for the most part, but you can get better elsewhere. While there are swordfights in GoT: Iron From Ice, they don’t make up the bulk of the gameplay, and the one true fight scene – while unavoidable – ends up causing an aftermath of its own. The violence has political consequences you deal with through words.

But while the fun in the TV series (and books, but Telltale derived its game from the HBO show) comes from seeing what happens to the characters and trying to guess the next twist, Iron From Ice does three things differently than the show: it puts the player in charge of conversations, holds them responsible for the consequences, and gives them a time limit in which to respond. The interactivity isn’t particularly notable, since games are interactive by nature, but the last two pump the player full of doubt and paranoia. Knowing that fell consequences can result from dialogue choices keeps you on edge, and the time pressure ratchets up the tension. While the player might have unlimited time for some decisions, there’s no such luxury when the player stands in front of Cersei Lannister. The immediacy of these decisions – particularly when a conversation takes a surprising turn – leaves little time for strategy, and to stay consistent a player needs to keep their eyes on the outcome and think on their feet. It isn’t unusual to walk out of an encounter thinking, what just happened, and what have I set in motion? That ambiguity – not knowing whether you’ve won or lost – lends the game a foreboding air. To die in GoT means restarting an encounter, but every misjudged bit of dialogue could birth a child that, one day, grows up to stick a knife in your back. It’s all smoke and mirrors, of course – the player has limited control over the game’s twists and turns – but it’s a good trick carried off with style.

Conversations have another brilliant aspect: because each character has their own social roles, expectations and goals, the player has to tackle dialogue encounters differently. The play style changes depending on if the character’s a lord, lady or squire. This constant shift in perspective and social roles keeps the dialogue mechanics refreshing, never allowing the player to get comfortable. 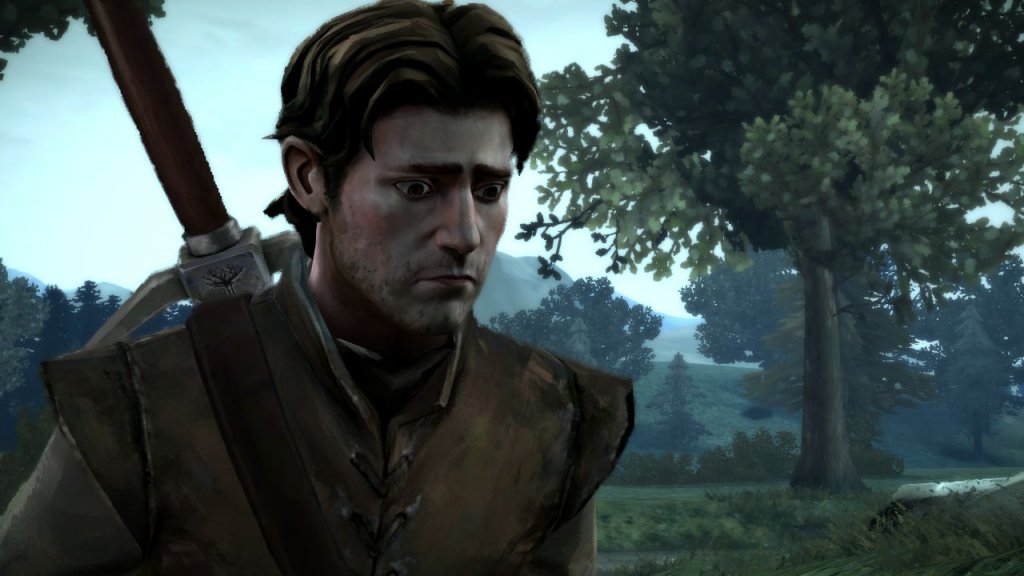 Gared Tuttle, as a squire, is the most straightforward character. As a longtime servant of House Forrester he serves as a trusted vassal – his choices confined to either following orders in hopes that they’re the right thing to do, or taking matters into his own hands. That may sound like an easy choice, but there are grey areas even there – it’s true that his lord gave him a message intended only for the castellan, but what if the castellan dies and no one else knows? Then again, is it possible Lord Forrester didn’t trust his own family? Gared has to decide whether he’ll follow orders he doesn’t understand or adapt to the situation as he sees it. His struggle comes from whether to trust authority or himself.

On the other hand you have the young Lord Ethan, an unprepared boy in a dangerous position. While Gared struggles to be a good servant, Ethan struggles to transform into a fitting master. Ethan’s youth and inexperience create a no-win situation for him politically. Should he try to project wisdom and diplomacy he may appear weak, but should he try to present strength he will almost certainly come off as a petulant, rash child. Or, and with me this is often the case, he can vacillate between the two and be inconsistent – the worst thing a leader can be. To complicate this balancing act, Ethan’s advisers – as well as his mother – continue treating him like a child. The game reinforces Lady Forrester’s power over Ethan during a crucial decision moment, when in addition to looking at the two candidates the player has to choose between, they can also look toward Lady Forrester, who’s gesturing with her eyes which one to pick. It’s an incredible touch, and neatly tears down Ethan’s charade – he’s trying to appear wise, strong and authoritative, yet everyone around the table knows he’s none of those things. It’s one of the more deft interpretations I’ve seen about the problems of child leaders, and brings up interesting questions about trust and governance. Who do you rely on when everyone, including your own mother, manipulates you? And to an extent, is that manipulation for your own good? It’s a question I’m still wrestling with a week after finishing the episode. 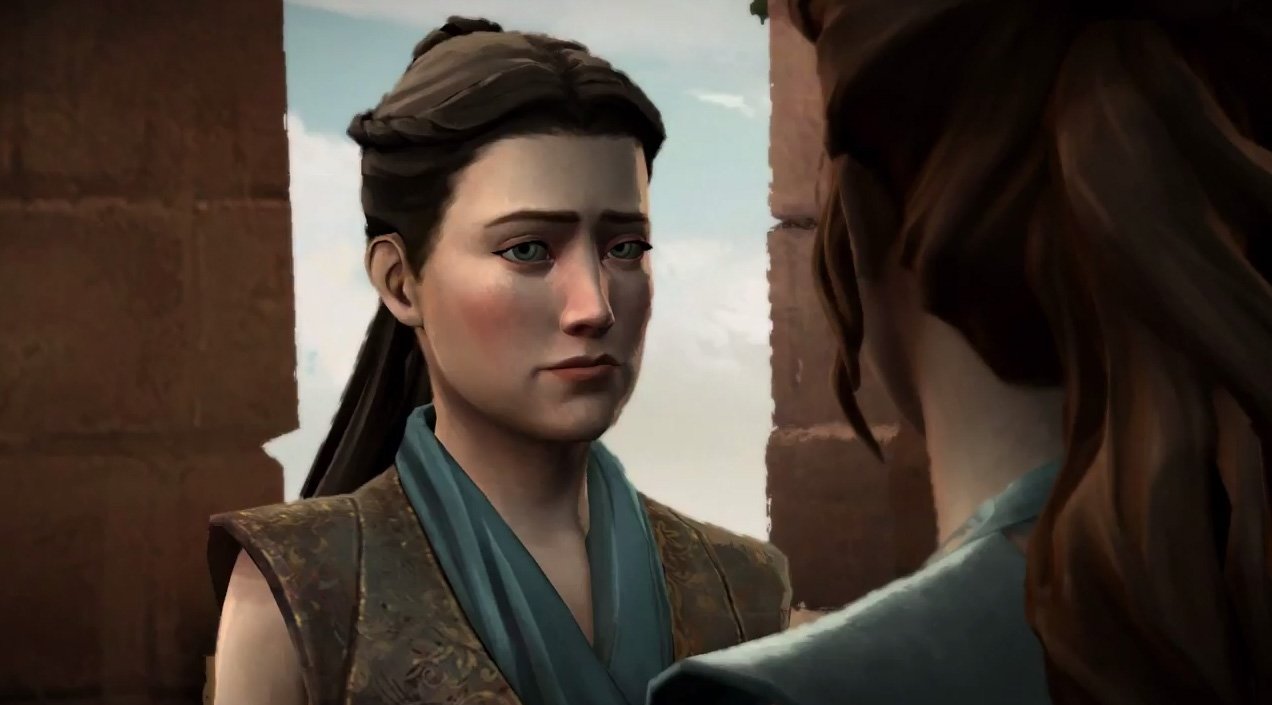 But for my money the most interesting character is Mira Forrester, an unmarried daughter serving as a handmaiden to Margaery Tyrell. Mira fascinates me, because while Ethan leads and Gared follows, Mira’s role stays hazy. A minor intriguer at King’s Landing, Mira suddenly finds herself as her Forrester family’s only advocate in the capitol. That means navigating allegiances and placating the crown, but it also throws her into nebulous territory involving politics, court intrigues and even espionage. Mira’s position – isolated and without steadfast allies – means she can neither tell the whole truth nor rely on confidences to keep her safe. More than any other, her story revolves around trust. Whom can she rely on? Are others trustworthy? Should she cement an alliance with Margaery or aim to please the queen? By the end of the episode, Mira graduates from pulling strings to full-on espionage – or if you’re suspicious like me, counter-espionage. (I mean, do you really trust that guy? Seven hells, I don’t.) Depending on the player’s actions, she may even steal an object that, in the medieval world, could land a person in jail or on the execution block.

Taken together, a theme emerges from the game. While Telltale’s The Walking Dead concerned itself around the question who will you choose to save?, it seems Game of Thrones centers around who you choose to trust. Gared must decide whom to entrust with a secret. Ethan has to pick his primary advisers and decide whether to rely on their council or act on his own instincts. Mira, alone in the web, needs to build a network of contacts she can rely on while minimizing risk to herself. For every one of them this involves going against family ties and friendship for the good of House Forrester. A thousand little betrayals to head off bigger ones down the road.

But this is Game of Thrones, where the headsman’s blade never stays dry for long and victories are merely a temporary reprieve. For all I know, the seeds of my downfall have already sprouted and taken root – growing in the fertile soil of a forgotten conversation, a rushed answer, a cocked eyebrow along with the phrase Cersei will remember that.