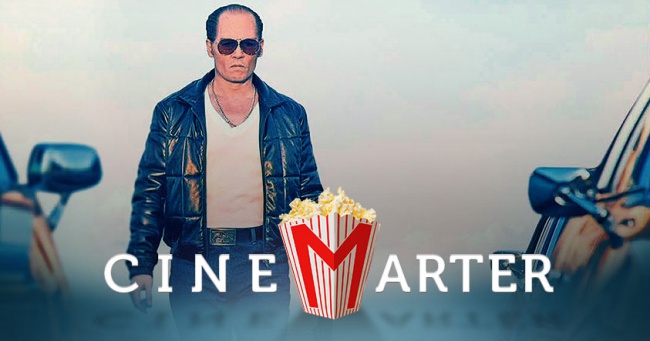 I don’t think anyone’s going to deny that Johnny Depp is one of the most electric actors currently working. I also don’t think that anyone’s going to try to fight the declaration that for the last decade – maybe decade and a half – the bulk of his work has been big-budget movies, the likes of which will give him paychecks to ensure that his grandchildren’s grandchildren will never struggle financially. While Depp never struggles to turn in a committed performance, the films over this period of time have been largely mediocre to bad, with only a couple of exceptions. Black Mass is being billed by many in the media as Depp’s “comeback” film, although what they really mean is that it looks like one that has the potential to be good. Depp didn’t go anywhere; he’s just been stuck in a seemingly endless loop of junk.

Black Mass, directed by Scott Cooper, is the based-on-true-events story of one James “Whitey” Bulger (Depp), a crime boss located primarily in South Boston. Taking place over several years, the film depicts important events both in his personal and criminal life, as well as events that happened around him. The film doesn’t want to act simply as a biopic of Whitey’s life; it also wants to focus on FBI agent John Connolly (Joel Edgerton), who uses Whitey as an informant for a lengthy period of time. This, however, is a house-of-cards story, and after teasing it for a while, events start to get out of control for both men, before – well, I don’t want to spoil it for those who don’t know about the real events, but can you really ruin a real-life story? Look it up if you want to know what happened. Or see the movie, because it’s the first good wide-release in what feels like forever.

Despite being quite a slow burn – one where talking is the primary form of action, with only brief spurts of extreme violence mixed in – Black Mass never starts to drag or feel dull. Part of the success has to be directly attributed to Depp, whose portrayal of Whitey Bulger is so multifaceted and alluring that every time he’s on-screen, you’re not sure what he’s going to do. Is he acting as the family man, who cares for his son and helps elderly ladies with their groceries? Or is he going to take that same lady and shoot her in the back of the head in the middle of broad daylight. He’s not a loose cannon, though; everything he does is calculated, or at least that’s the appearance he gives off. He’s either one step ahead of everyone in the room, or he’s completely lost his marbles. Either way, it’s captivating. He can chill you to your core with a simple touch of a face, or he can make you genuinely sympathize with him as he plays gin rummy with his mother, sometimes with both feelings occurring in the same scene.

The politicking, the negotiations, and even the rare moments of levity are all fascinating.

Depp is aided by a strong supporting cast who have their own agendas, which either align with Whitey’s or go against him – sometimes with alignments changing over the course of time. If you get confused as to who’s on whose side, just remember this, which is a staple in all gangster movies, but especially in those set in Boston: the longer the friendship, the more unlikely it is to be broken. The men who grew up together in Southern Boston have a bond that has created a sense of loyalty that is more important than any job title they currently possess. In spite of their opposing professions, it’s a rare moment when we even suspect that Whitey and John might think about double-crossing each other. They’re just not like that, which is admirable in its own way.

It’s complex and complicated characters, and the relationships between them, that keeps Black Mass interesting. Johnny Depp certainly helps, but one fun character in an otherwise dull movie wouldn’t elevate it to the point where it would be worth seeing. What does that is getting to watch all of these individuals interact with each other. The politicking, the negotiations, and even the rare moments of levity are all fascinating. Morality, on both sides of the law, plays into the proceedings, as does the desire for advancement – for more. It’s a world that the average person doesn’t get to experience except in fiction, and thanks to the individuals that populate Black Mass, it feels rich, vibrant, and something in which you should invest your time.

While it may not be quite as thrilling as The Departed – still the pinnacle of these sorts of things – in large part because it does feel very reminiscent of better movies, and it sometimes feels cold, like it’s presenting facts instead of trying to tell a compelling narrative, Black Mass is a thrilling tale of loyalty, deceit, and one very, very interesting mobster: Whitey Bulger. Johnny Depp turns in his best performance in a long time, he’s supported wonderfully by the likes of Joel Edgerton, Benedict Cumberbatch, Kevin Bacon, and Corey Stoll, and the film has a rare ability to make you both fear and sympathize with its gangster protagonist. Sure, he’s doing some really terrible things, but you also kind of want to see him get away with it, even when his house of cards begins to fall apart. Johnny Depp has finally picked a good project that doesn’t feel like a cash-grab; let’s hope he starts picking them more frequently.

Bottom Line: Black Mass is a tense and interesting movie about a real-world crime boss.

Recommendation: Unless you’re tired of Boston-set gangster movies, Black Mass is worth seeing.