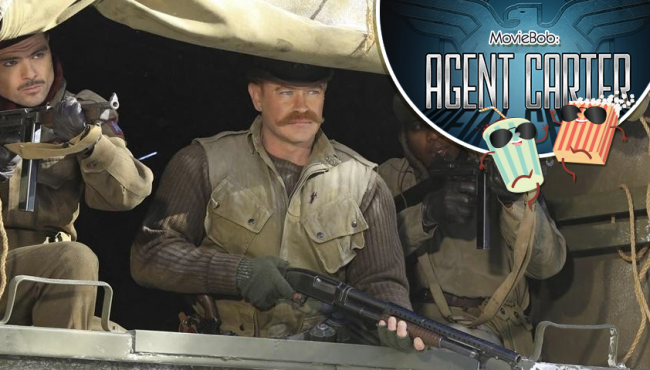 Agent Carter reaches a high point in “The Iron Curtain,” with great action, character building, and by delivering on the series’ initial conceptual promise.

And five episodes in, here we are: “The Iron Curtain” is Agent Carter blossoming from being already pretty great – but in a slightly different way than expected – to the too-cool-to-be-true “Proto-Feminist Secret History of The Marvel Cinematic Universe” concept that floated back when the whole thing was still a maybe.

It’s also the best episode yet of the series overall in terms of writing, acting, story and direction working in complimentary fashion. But simply put, this is the Agent Carter I (and, I imagine, plenty of others) were picturing: A functioning side-sequel to Captain America: The First Avenger with Peggy Carter finally flexing some “Do you know who I am?” muscles against her chauvinist colleagues at the proto-S.H.I.E.L.D SSR by summoning up The Howling Commandos (Steve Rogers’ handpicked unit from the first movie) and leading them against a new side of the mysterious “Leviathan” threat that has direct ties to the origins of a core Avenger. All that, plus a pun-tastic groaner title (“Because she’s a tough lady in a man’s world, but it’s also The Cold War – get it??”) – what more could I ask for?

If my social media feeds are any indication, Agent Carter has become appointment viewing for a lot of mothers and young daughters. Said daughters were the first thing I thought of during the episode’s surprising cold open: a flashback by Dottie, Peggy’s secretly-an-evil-Russian-assassin neighbor, to her childhood in a Russian boot-camp for preteen girl super-soldiers which climaxes with Young Dottie besting a bunkmate in a pint-sized kung-fu brawl to the death. It’s dark stuff, meant to horrify us… but if I know kids, this sequence – a scenario we’ve seen in a thousand assassin/spy/ninja/etc. movies with male players – instantly became “The coolest thing I’ve ever seen on TV” to thousands of little girls.

This, of course (though thus far only the episode’s previews are saying the name out loud) is training ground where The Black Widows – up to and including The Black Widow, Natasha Romanoff of The Avengers – are forged. In the story-proper, the abandoned (or maybe not?) facility is also being used to imprison some kidnapped engineers Leviathan is using in conjuction with some stolen(?) blueprints from Howard Stark. Peggy, having given up on Stark and Jarvis’ “Work covertly for us because your douchebag co-workers will never really respect you” after learning that they concealed the existence of a vial of Captain America’s blood from her, opts to bully her way onto the away team by solving an “unbreakable” Leviathan code and a promise to deliver her Howling Commando pals as backup.

Elsewhere, SSR boss Dooley is back from his overseas fact-finding trip re: Leviathan with a renewed willingness to consider that the situation is bigger than he and his men’s misdirected personal vendetta against Stark. Specifically, he tracks down Jarvis to let him know that he’s open to at least hearing the “missing” inventor explain himself.

The rest is mostly a set of fine action scenes and character-building, as the investigation/rescue mission stops at welcome intervals to let Carter finally show off her sizable soldiering skills to Agent Thompson, among the most persistent of her office tormentors (but also the most upfront about it), who in turn reveals a surprising new dimension to his personality and behavior. No prizes for guessing that softening things up between Carter and Designated Heel Thompson occurs parallel to things starting to sour with Agent Sousa, the war-wounded “nice guy” whose puppy-dog crush on Peggy is an ill fit with his pursuit of the “mystery traitor” he’s about 99.8% of the way she just so happens to be (Oh no! Not the one guy who was good all along just as she’s finally earned the grudging respect of the others!)

Interestingly, the overarching meta-plot doesn’t actually move forward all that much, instead preferring to let the Black Widow Program add to the loose tendrils dangling off the Leviathan mystery. It’s not clear what “Dottie’s” mission actually is – she snoops around Peggy’s room, doesn’t find the blood (or seem to be looking for it) but makes time to moon over a photo of pre-Captain Steve Rogers, play with her makeup and try out a British accent in front of the vanity mirror all Single White Female-style. Also, Peggy and the Commandos find a lone school-aged Widow trainee still hanging around the school gifted with lethal gun/knife/combat skills of her own – intriguingly, she lives to fight another day but doesn’t get a name…

Reccomendation: If you’re not watching yet, start – especially if you’re among those who want Marvel to put more energy into woman-led franchises.