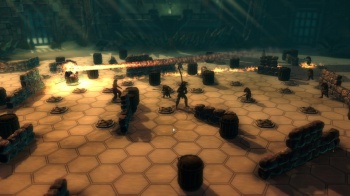 Daedalic Entertainment is something of a pioneer in the field of modern point-and-click adventure games. It’s probably best known for titles like the lighthearted Deponia, and the slightly-less-lighthearted Night of the Rabbit. What Daedalic isn’t known for, however, is its presence in the field of RPGs, but it’s hoping to change that with the upcoming turn-based, tactical battle-focused RPG, Blackguards.

Based on The Dark Eye, an RPG system akin to Dungeons & Dragons for its mostly-European audience, Blackguards is said to be the “darkest take on The Dark Eye universe.” With only a limited knowledge of The Dark Eye, I can’t speak to the accuracy of this claim, but I can say with confidence that the story is bleak from the outset. It begins with a slain princess, and you, the protagonist, grieving over the body, with no clue as to what has happened. When the guards find you over her corpse, you are immediately imprisoned for her murder. As the story unfolds, you must clear your name in the killing, as well as identify the real killer so they might be brought to justice.

With your execution looming, your first mission is to break out of prison. Naturally, you’ll need some assistance, so you team up with some other prisoners looking to escape. With your only compatriots being criminals, it’s easy to see how Blackguards‘ story is going to be a bit of a darker tale, but from what we saw in the demo, it wasn’t entirely grim throughout. In fact, the darkest part of the story is the main quest, where you’re investigating the gruesome death of your friend, the princess. The other criminals seemed like fairly petty crooks, rather than hardened killers or anything more nefarious, even offering a bit of slapstick in their interactions. Apparently, you have to manage their relationship throughout, lest they go rogue on the battlefield and stop responding to your commands. If things go too far south, one of them might even wander off in the middle of a fight, leaving you to fend for yourself, until you can patch things up between the bickering NPCs.

When you’re not busy smoothing out relations among your party members, you’ll be getting glimpses of the characters’ backstory through flashbacks, as well as playing out bits of the storyline yourself via tactical battles. This is where things start to really look fun. As much as I appreciate trying something seemingly novel with the party infighting, it is still secondary at best to the primary mechanic of the game; a hex-based tactical battle map. If you’re familiar with the Heroes of Might and Magic games, this will be familiar to you, although instead of stacks of units, you’ve got individual characters duking it out. You’ll click to move to a hex, which is color coded to identify how far you can move without sacrificing your action for the turn, then click to interact with another character or a part of the environment. You’ll get a menu when you click on an enemy combatant which allows you to choose how you’d like to interact with them. You can use a standard melee attack, or a special ability, like a power attack or magic spell. One particularly interesting bit about the battle maps is that there are a number of interactive elements on most maps, which can be used to your advantage. On your mission to avoid execution, for example, there is one encounter where you can unlock cells to unleash riotous prisoners which will distract the guards while you make your escape. Other interactive elements include deadly traps, which you can either fall victim to, or lure unsuspecting enemies onto if you’re clever enough.

As with any RPG, you’ll be expecting some kind of leveling system, but this is another aspect of Blackguards that doesn’t exactly fit the standard model. Instead of preset levels, you’ll acquire “Adventure Points” which can be used to purchase new skills piecemeal. This lets you level at your own pace, picking up many cheap skills quickly, or slowly saving up for more powerful abilities. While it’s difficult to say just how well executed this system is just from seeing the demo, the idea has a lot of potential for min-maxing or just adventuring in your own way, assuming it is implemented properly.

All told, Blackguards is looking to serve up five story chapters, totaling some 40 or more hours of gameplay. The hex-based battle maps are interesting, if not entirely novel, and seem to offer a lot of variety based on your tactics. To that end, there are even alternate endings to some scripted battle maps, which can impact the story. I can’t really speak to the leveling system, except to say that it sounds intriguing, as I didn’t get a chance to really dive into it myself. With everything that Blackguards wants to do – it is ambitious to say the least – you’ll want to keep an eye on it, though many of the things that make it stand out are going to be the same things that limit its general appeal.

Blackguards is being developed by Daedalic Entertainment, and is slated for a mid-November release on PC.